In just two days, we'll find out who will ascend to the Iron Throne so we thought it the perfect time for a little grateful Game Of Thrones geek out. It doesn't matter if you are with the Mother Of Dragons or House Stark, this piece of fan fiction and the accompanying playlist is just plain fun.

EYES OF THE WORLD

The all-seeing, all-knowing Bran. After Jaime Lannister pushes him off of a Winterfell tower, Bran "wakes up" and begins to develop his power to see through the eyes of animals and have prophetic dreams.

Sigil of House Stark. These direwolves of the oft frozen North are protectors of the Stark children. And on occasion, they do indeed "collect their due." Sorry, Joffery! Sorry, would-be assassin of Bran! Sorry, Lannister sentries at the Battle of Oxcross. Sorry, Wildings in the Battle Of Castle Black!

I have seen where the wolf has slept by the silver stream. I can tell by the mark he left you were in his dream.
Ah, child of countless trees. Ah, child of boundless seas. What you are, what you're meant to be. Speaks his name, though you were born to me, Born to me...

Here comes Bran and the wolf again! After being crippled, Bran Stark seems to be able to travel further and with more depth than when he stood on both legs. His return to life comes with prophetic and psychic abilities, allowing him to inhabit the minds of his direwolf Summer, Hodor, the three-eyed crow, and after meeting the Children of the Forest, a weirwood (hey Bob!) tree. Ah, child of countless trees!

Varys aka the Master Of Whisperers uses his "little birds," a network of child spies, to gather intel and secrets from across the realms. They tell him all they know in return for his protection.

FIRE ON THE MOUNTAIN

SPOILER ALERT... the "Long Night" had plenty of ice and glass and formless reflections of matter shattered! And Melisandre, "The Red Woman," having played her part, "recedes in the nights of goodbye."

Went to see the captain, strangest I could find
Laid my proposition down, laid it on the line
I won't slave for beggar's pay, likewise gold and jewels
But I would slave to learn the way to sink your ship of fools

Oh Greyjoys of the Iron Islands - seafaring folks who do not pay with gold or jewels, but “Pay the Iron Price.” The Iron Islanders rebelled against throne during the Greyjoy Rebellion, determined to rule themselves. Their fleet was defeated at sea. Euron Greyjoy IS the strangest captain you could find! Cocksure, he leads a fleet across the world to foolishly try to wed the Dragon Queen and finds himself charming his way into the bed of Cersei Lannister. In the end, the question is - did he sink or swim?

HELP ON THE WAY

Like a child she is pure, she is not to blame
Poised for flight, wings spread bright
Spring from night into the sun
Don't stop to run
She can fly like a lie, she can't be outdone

In the purity of her youth, Daenerys makes a deal with the maegi Mirri Maz Durr to keep her love Khal Drogo from dying. She will pay any cost, but learns only life will pay for life after accidentally sacrificing her unborn child and resurrecting a zombified catatonic version of Drogo. She burns Khal Drogo in a pyre along with the Maegi and enters the flames along with three petrified dragon eggs. She feels no pain, the fire can’t hurt her and she emerges the mother of three baby dragons.

MOUNTAINS OF THE MOON

Twenty degrees of solitude, twenty degrees in all
All the dancing kings and wives assembled in the hall
Lost is the long and loneliest time, fairy Sybil flying
All along the, all along the mountains of the moon

In the vale of Arryn, we quite literally find the Mountains of the Moon. And in these mountains, is there stands a castle with a moon door. Lady Lysa Arryn and her sickly child live there in relative solitude, abstaining from wars and sending folks "flying" when they come to do harm.

You who have found it, please help me along
I'm a man, I'm a man, - I'm not made out of stone
My needs they are simple, I don't want many things,
But I truly want to fly on those wings of love one more time.

One of the major religions in the story is the Faith of the Seven. This faith has a seven faced god represented by seven individual aspects, the most ominous one being “The Stranger."

While our version of "The Stranger" merely hints at religion with it's alternate title "Two Souls In Communion," it most certainly conjures up scenes of travelers in search of salvation, magic versus nature, beggars and kings, and that ride on "the wings of love" for Jon Snow and Daenerys.

Ah The Wall! Between the Wildlings and the White Walkers, the Knights Watch need something built to last to keep the Seven Kingdoms safe. In the end, the Wildlings were on the right side of The Wall for the Long Night.

There's a band out on the highway
They're high-stepping into town
It's a rainbow full of sound
It's fireworks, calliopes and clowns
Everybody's dancing

Early in the series, Renly Baratheon becomes a contender for King thus establishing the war of the 5 Kings. He travels with caravan of supporters from Storms End and Highgarden that back his claim and crowned him their king. They are “high steppin’” their way to Kings Landing and having a party on the way with tourneys and melees. Catelyn Stark calls him out saying he is only playing at war. She thinks he’s a clown.

His King’s guard wears rainbow cloaks and is known as the rainbow guard.

From the vantage point of the singer to the "last rose of summer" and "the night that lasts forever" - there are so many ways we could go with this one but "Black Muddy River" might have the strongest connection to Catelyn Stark aka Lady Stone Heart.

Catelyn is murdered at the Red Wedding by the enemy who are disguised as a band and singers. She becomes suspicious when she can’t make out any of the songs - everyone seems to be playing something different. After she is killed her body is thrown in the river turning it red or muddying it. She is later pulled out (by Aria’s long lost Direwolf) and resurrected by Thoros of Myr. Her former soft-hearted nature is replaced by a vengeance driven blood-lust and she is referred to as Lady Stone Heart (Stone). She roams the Riverlands as the new leader of the Brotherhood Without Banners.

Display on homepage featured list
On
Homepage Feature blurb
It doesn't matter if you are with the Mother Of Dragons or House Stark, this piece of fan fiction and the accompanying playlist is just plain fun.
Feature type
News
Tags
Playlist

and somewhere out there, there are tapes of Robert Hunter's Armageddon Rag songs for the movie that was never made, for another George RR connection.

Here is a link to the Hunter lyrics. He played a version of the song at a solo performance in 1984.
https://www.whitegum.com/songfile/ARMAGEDD.HTM

Phil and Friends played the companion piece “Resurrection Rag” at the ‘99 Mountain Aire Festival. Here is a link to the complete concert, which is fantastic! About 6 months after Phil’s liver transplant!
https://archive.org/details/paf1999-05-29.sbd.miller.29444.flac16

It's a travesty, I tell ya! 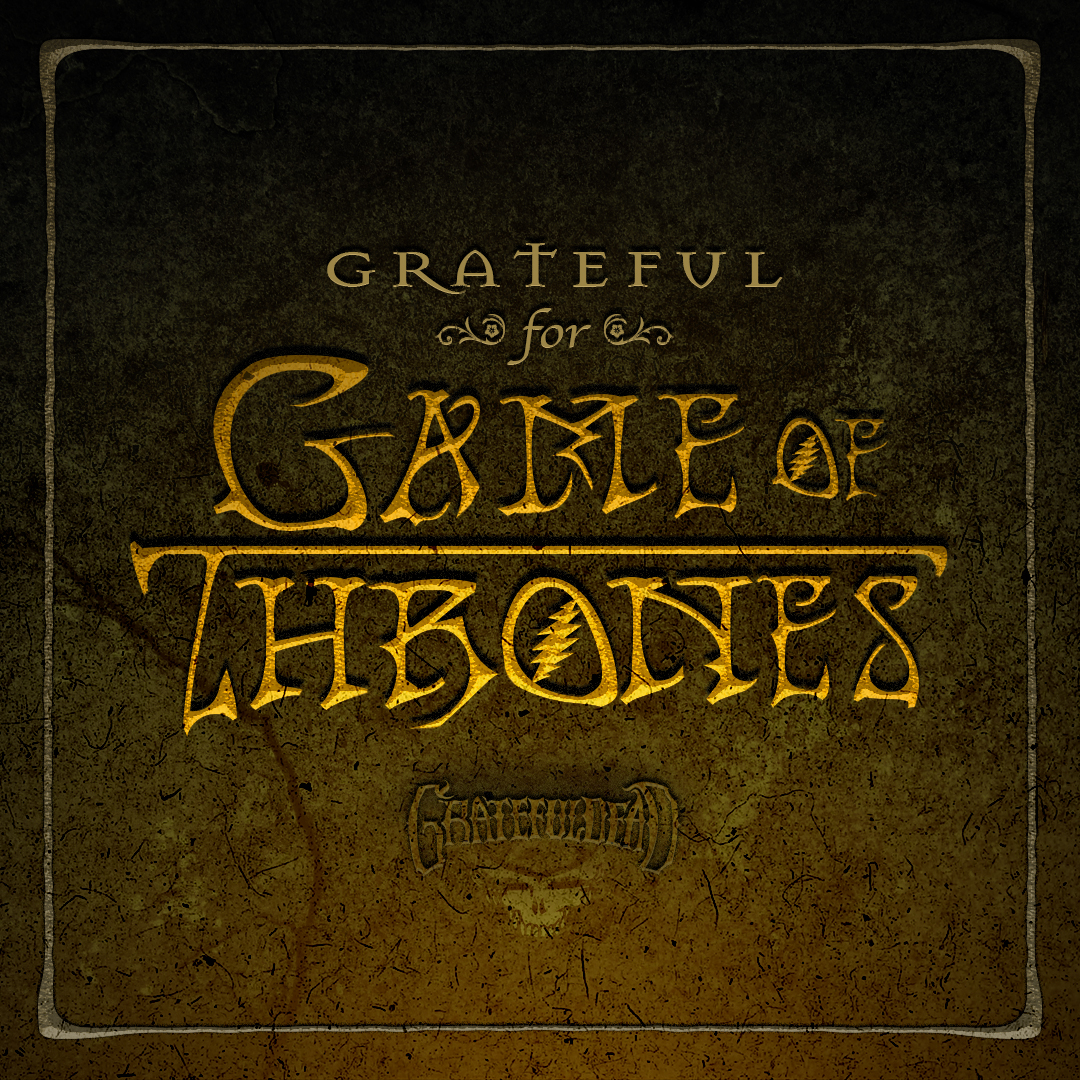