Here’s the plan—each week, I will blog about a different song, focusing, usually, on the lyrics, but also on some other aspects of the song, including its overall impact—a truly subjective thing. Therefore, the best part, I would hope, would not be anything in particular that I might have to say, but rather, the conversation that may happen via the comments over the course of time—and since all the posts will stay up, you can feel free to weigh in any time on any of the songs! With Grateful Dead lyrics, there’s always a new and different take on what they bring up for each listener, it seems. (I’ll consider requests for particular songs—just private message me!)

Last week’s post about “U.S. Blues” made me think, quite naturally, of “One More Saturday Night.” The background is well-documented, and easily found on Alex Allan’s Grateful Dead Lyric and Song Finder site. But the gist of it is that the song began as a Hunter lyric, but Weir ran with an early draft, wrote a whole song, keeping only one line, really (“one more Saturday night”) and Hunter took his name off the lyric. So it stands as a song with words and music by Weir.

I just took a look at the old web page for this song, on the Annotated Grateful Dead Lyrics site, and it is a bit embarrassing. There is no full text of the song, and the few links I put up in preparation for annotating the song lead nowhere. I have a dead link to “President,” and one to “Victrola,” clearly thinking that I would be at least able to come up with something to say. And at the bottom of the page, I inaccurately stated that Springsteen performed the song, which he actually never did—it was another song—one more “One More Saturday Night.” So, I apologize. Maybe this post will make amends.

The entry for the song in the printed book fares much better. But frankly, the lyrics offer little in the way of reflection.

I do love the fact that the mention of “everybody dancing at the local armory” mirrors the Dead’s own experience, since they played a number of shows at the Santa Venetia Armory in Marin County in 1966 and 1967.

It was a song played mostly on Saturday night shows, but not always—for instance, its first performance was on Tuesday, October 19, 1971, at Northrop Auditorium, the University of Minnesota, Minneapolis. It was played a total of 340 times, with the final performance taking place on July 8, 1995. 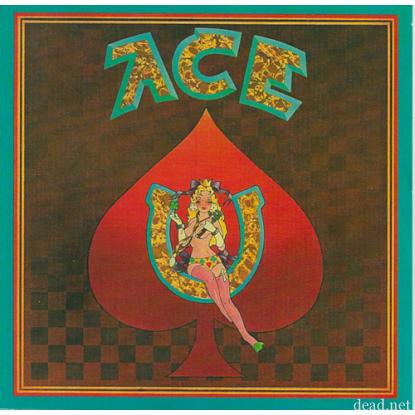 It appeared on Weir’s “solo” album, Ace, which, as has been noted, is a Grateful Dead album in all but name. Ace was released in May, 1972. “One More Saturday Night” was released as a single, backed with “Cassidy.”

My own strongest memory of the song comes from a party my roommates and I threw in Davis, in 1976 or 1977, at our place. We made a dance tape, of course, and my many suggestions for Grateful Dead tunes were mostly vetoed, except for “One More Saturday Night,” which everyone agreed sounded like a dance tune. And when it came on, I distinctly remember the biggest Deadhead I knew, Julie O., jumping up in glee and dancing like crazy. I was relieved—not being sure yet which songs might be “uncool” among more experienced Deadheads like Julie. (I do have at least one Deadhead friend who truly does dislike this song, though...)

There aren’t all that many originals in the Dead repertoire that adhere to a fairly straight-ahead rock and roll progression. I think every band should have at least one. And as Garcia once said: “Cause, playing rock and roll...it’s fun!” And the big walk-up in the middle is always a blast to hear.

Weir played around with the words some over the years, depending who was in office. During the Reagan years, he would refer to Nancy and Ron. With Bush in office, he would stick the word “George” in there—“His wife say don’t get crazy, George, you know just what to do...” (There’s evidence he did this with both Bushes, though obviously, not with the Dead.)

So, this will be a relatively short entry, for a song about which I don’t have much to say. I hope some of you out there will have some memory sparked by mention of this song.

Last week’s post about “U.S. Blues” made me think, quite naturally, of “One More Saturday Night.” The background is well-documented, and easily found on Alex Allan’s Grateful Dead Lyric and Song Finder site. But the gist of it is that the song began as a Hunter lyric, but Weir ran with an early draft, wrote a whole song, keeping only one line, really (“one more Saturday night”) and Hunter took his name off the lyric. So it stands as a song with words and music by Weir.

I wish Furthur would stop playing this as an encore

Both this song and US Blues (last week's essay) have had their reputation's hurt by their slot in the setlist. I like this song in the first set, but it seems like an unimaginative throw away as an encore on Saturday night.

I do think it was one of the big crowd-pleasers about this song. I wonder how many Saturday shows it was NOT played at. I seem to recall one Greek run when they opened a Sunday show with it on account of not having played it the night before.

in a weird way

I think of this and "The Music Never Stopped" as companion pieces. Different moods, but some overlap.

sums it up for me :D

Get Prepared, There's Gonna Be a Party Tonight!!!

One of my favorites!!! I think it makes an excellent opener, especially if it is played on a Saturday night. Just something about it, it sets the mood for the whole night. Never forget my 'birthday show' - Furthur in Orlando, Florida. Feb 6th, 2010. After flying out of a snow storm in WV, we hop off the plane in Orlando and it's a comfortable 60 degrees, plenty of sunshine. We got to the show pretty early, and managed to camp out near the stage. The band came out, I was really expecting some spacy noodling intro like they usually do. Bob waived his hand in the air, counting down, and they started up with One More Saturday Night. Just felt like that song charged the whole place. It was a bold statement, like saying they wanted to play more upbeat Rock and Roll versus spacey acid drenched music. They followed up with Bertha, just seemed like the perfect song to follow. I don't think it would work as well if they opened with it frequently. No matter where it's at in the set, no matter what day it's played on, I just love this song. Don't see how anyone can not like it. Bet you anything that those OMSN haters would still tap their feet to it however they are listening to it. Didn't the GD give it the Palindrome treatment once??? Opening with half the song, then coming back to it on the other end??? Seems like I remember that - but maybe that was a dream ...

More visions of the Grateful Dead Movie... and IGGY!!!

Just like US BLUES, some more visions of the Grateful Dead Movie.... Back in October 1974, "One More Saturday Night" was still mostly fresh and new. The Winterland crowd greets the song with much applause and everybody is dancing. Onstage, a few revelers from the crowd are dancing by Keith's oversized ultra-grand piano (with the 'steal your face' logo on top!). One of my favorite GDM 'characters' is up there dancing... Iggy, the diminutive but enthusiastic Deadhead of apparently unknown race & origin. He looks a bit AfroAmerican or Hispanic but I never really could tell. Iggy is the guy who recites the poem (during "Eyes of the World" sequence). Something like "skin a cat and take a shower" and something about "Mama hated diesel so bad..." I'm not really sure.... Well, let's read the entire poem!!!: If the Dead were to die, there'd be reason to cry 'Cause the band I used to see, would be a cold memory. But if the Dead were to live, free concerts they'd give, Jerry G. on guitar would bring them in, near and far. But if the band were to cease, there'd be no street peace, We'd take on the power, skin a cat and take a shower. But if the Dead live long, we'll be singing their songs, And we'll all be so glad Mama hated diesels so bad! Some memorable words from Iggy, but the picture of him dancing onstage to "One More Saturday Night" is one of my all time favorite movie moments.

you be thinking of Cal Expo 86, marye. I recall listening to this song (the E72 version) on the radio or on tape after hitching a ride back to the Las Vegas Strip in 91. It was a very pleasant experience. The one in the GD movie is good as it picks up steam and power. some alternate words early on: I may be young and crazy but I don't see reason one to fussin and be fightin when we should be havin fun (or something close to that).

I love this question, Mary. How many Saturday shows was it NOT played at? I think it's time for a whole new index in DeadBase. This would be one example, but what about others, such as...Bakersfield shows where they didn't play Mexicali Blues? (100% of 'em!)

the one from Friday the 10th of December, 1971, at the Fox Theatre in St. Louis. Second time used as an encore and the goods are delivered. (It was probably Saturday by the time they got around to it, eh?)

Definitely not one of my favorites...

Not Really sure why... I just could never really get behind the song. I find myself wanting to skip it when it comes up in a show that I'm listening to. Oh well... I'm sure everyone has a few of those!

I think the Europe versions were full throttle locomotive, "crackling with energy" to steal a Jerry phrase. To me it always sounded like there's a small symphony on stage. It's a pure Rock n Roll song. It lost it's pop over the years for sure and you knew that it was coming. Oh well, gotta feel blessed to be a baby boomer that was born right on time for the Grateful Dead experience. So many were not as fortunate. Amen

I love the snippit of original lyrics. I always wondered what they were.

Gotta Love that Good Old Rock and Roll Bill Haley...Jerry Lee... Chuck Berry...Buddy Holly... This Song is a Trip to the Fifties Pure Raw Adolescent Passion I bet if Elvis were asked if he Loves this song he would say, "WELL UH HUH"

For about the first 3 months, the lyrics contained "There's A God Way Up in Heaven, for whatever it was worth, though he'd have a big ol party, thought he'd call it planet Earth, I may be young and crazy but I can't see reason one, why we'ree all complaining when we should be having fun!" I always have liked those lyrics - wonder why they changed??

When Ace came out in 1972 my friends and I went around for years sayin "hey a ha". Ace was one of three or four 8-track tapes for our cross country drive in June of 72.

Helped us figure out what day it was

Sometimes this song helped us figure out what day it was! If we knew it was Saturday night before the show, we looked forward to hearing it.
17 comments
sort by
Recent
Recent Oldest A to Z Z to A
Reset
Items displayed