The Grateful Dead’s famed Warfield Theatre run of October 1980 is justly renowned for many reasons: the music, which produced the LPs Reckoning and Dead Set; the newspaper announcement, which didn’t even mention the name of the band; and the lobby display, a museum-quality exhibition that was a masterpiece of Bill Graham’s promotional acumen. But one of the most interesting events of the run was far less public: during intermission one night, Rock Scully and Alan Trist brought a young historian backstage to be introduced to Jerry Garcia. When Garcia found out that this was Dennis McNally, author of the critically acclaimed biography of Jack Kerouac, Desolate Angel, he urged McNally to give the band the same treatment. McNally readily agreed, and in time he would not only complete his magisterial history of the band, but in the interim he would also serve as the band’s publicist, a role that allowed him to shape the band’s media presence and steward one of the most important sections of the band’s archive, the press. 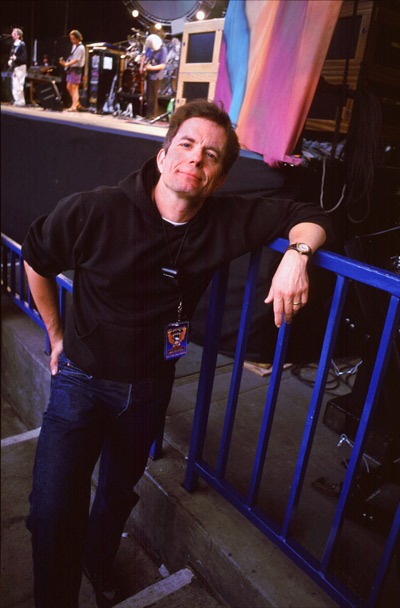 There was an air of Deadhead synchronicity to it all. Right before the Warfield run began, McNally’s first article on the band appeared, “Meditations on the Grateful Dead,” published in the San Francisco Examiner’s California Living magazine. It provided a first-rate snapshot of the scene on the cusp of the Reagan Eighties. Although McNally’s article focused on the December 1979 New Year’s run at Oakland Auditorium, it used the shows as the platform for a wide-ranging essay on the Dead, their fans, and the cultural significance of the phenomenon they had both created. It marked McNally’s debut as a Dead chronicler, a role he continues to play to this day, and the article reveals his status as both a fan and a PhD in history:

If you have ever wanted to see 6,400 people as deliriously happy as they know how to be, truck on down to the show, because the Dead are home to play … These two square blocks are not only out of place, in a sense they are out of time, for this event is a continuation, a functional evolution of Haight-Ashbury in the sixties.

Adding McNally to the band’s organization—even if he was unpaid, he was still on the bus—was very much a Dead-like move, a thoughtful response to a confluence of factors. It gave the band a historian just as their need for one was becoming more apparent, and at a time when, as an organization, they had the ability to absorb the growth that the new role signified. As the Dead’s first twenty years had made clear, what the band’s organization could do very well was adapt—and thrive. During the Dead’s last ten years, they would emerge as one of the most durable and popular touring rock bands, and in his capacity as publicist, McNally would play a central role in shaping the band’s media image during its last decade, the era of its greatest prominence.

McNally donated his papers to the Grateful Dead Archive in 2010. Assembled over more than forty years, his collection features extensive research materials that informed his many articles on the band and especially his authorized history, A Long Strange Trip: The Inside History of the Grateful Dead. The heart of the collection is the interview series, more than 200 hours of recordings conducted with band members and associates over more than twenty years. His research covered an enormous range of American culture and history, however, and his files reveal a meticulous and dogged determination to uncover the story of the Dead and their times, from band members’ early days on the San Francisco peninsula in the folk scene to the band’s experience in the Acid Tests, the Haight-Ashbury, and after. In addition to more than forty linear feet of notes, articles, drafts, and research files, the McNally papers added dozens of tickets, backstage passes, photographs, and ephemera to the Archive.

McNally’s papers also show how permeable the line between band and fan could be. From their earliest days, the Dead attracted talented, interested colleagues who loved the Dead’s music, and whose skills could contribute to the band’s project. McNally was one of those. As a graduate student at the University of Massachusetts, he was a fan; a few years later, he became part of the team. During his first four years as band historian, he passed the staff and crew equivalent of the acid test, so that when a staffer complained about the volume of press inquiries, Garcia’s response was, “Get McNally to do it, he knows that shit.” It was the most painless job interview McNally ever experienced, and he remained the band’s official publicist for the rest of the band’s career. 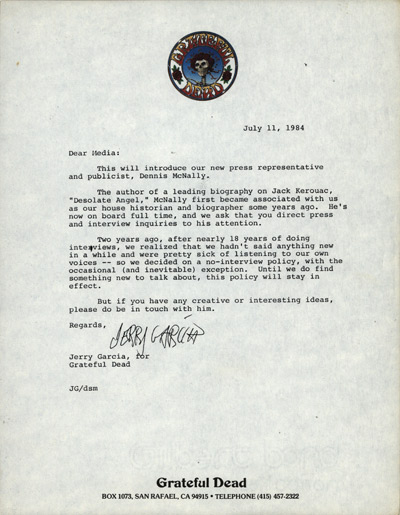 McNally’s contribution also illustrated another facet of the broader Dead phenomenon, which is how it emulated the Dead’s music in so many fascinating ways, especially in the way that it tested the limits of genres and artforms; this is why both the band and its fans could become both subjects and exemplars for so many journalists and scholars. McNally is pre-eminent among them, a scholar drawn to the Dead as a topic who ended up living it, and making a profound contribution to one of the principal forms of evidence that scholars now consult, the journalism documenting the band’s cultural impact.

Working for the band was much more than just a job. At its peak, the Dead organization elicited the best from its participants, and the band was a part of that. When McNally got married, Bill Kreutzmann was his best man, and Robert Hunter’s wedding present was his hand-written lyrics to “He’s Gone.” As McNally put it, “That band was my life. There was nothing like a Grateful Dead concert,” he told MTV News in 2001. “It was the last great American adventure. Nobody has combined intellect and heart and improvisation the way they did. No one has even come close.” His papers show why. 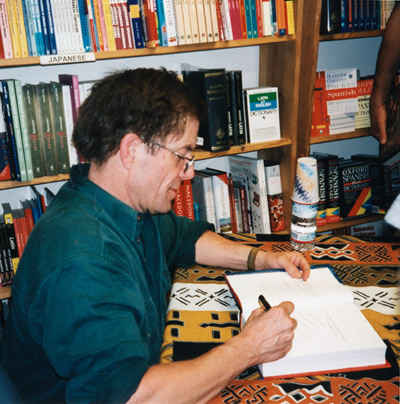 The Grateful Dead’s famed Warfield Theatre run of October 1980 is justly renowned for many reasons: the music, which produced the LPs Reckoning and Dead Set; the newspaper announcement, which didn’t even mention the name of the band; and the lobby display, a museum-quality exhibition that was a masterpiece of Bill Graham’s promotional acumen.

was one of the most influential things I ever read. I think I've still got it in a box somewhere.

that Jerry letter is great

and I will forever be grateful to Dennis for letting me interview Jerry.

I bought a copy soon after it was published in 1980. Picked it up on one of my many trips from Montana to New Mexico. I saw it in some book store in Santa Fe in December of that year. Same time as when John Lennon was killed. I had read several of Kerouac's books by that time and started reading biographies about him. Desolate Angel is maybe the best Jack Kerouac biography along with Gerald Nicasio's book, Memory Babe. So I lived that winter on the highline in northern Montana in an old cabin built in 17.Perfect place for reading during blizzards when the wind blew heavy on the borderline. Glacier Park just to the north. Fast forward ten years to February 18,1991.It was 20 years after the famous Capitol Theater show that I had attended.Dennis McNally and Alan Trist were giving a reading at Keplers Bookstore in Menlo Park that night. Before the reading I decided to visit Pigpens grave in south bay. I had been there once before with a special lady friend who had grown up in that neck of the woods but that's another story. So I knew how to get to the place and arrived with a pint of Southern Comfort and a boom box with a Dead tape from 2/18/71. I had the tape stopped at the beginning of Hard to Handle, drank most of the pint, smoked, poured part of the liquid Bacchus on top of the grave and left a couple Apache Tears as offerings. While being quite inebriated I played Hard to Handle and yes communed with the spirits of Bacchus and Pigpen. Then driving down the hill to the reading I made my way to Keplers. I had a copy of Water of Life by Alan Trist from Hulogosi Press and a hardback copy of Desolate Angel by Dennis McNally. Somewhere I have the cassette tape of that nights reading. After they finished reading and took questions I asked Dennis his thoughts on Kerouac's influence on Bob Dylan and specifically in reference to the song Desolation Row. Desolation Angels is perhaps my favorite book by Kerouac. So now I need to read McNally's latest book. I read his Grateful Dead biography. Excellent to say the least. Huge respect to these amazing historians, archivists, writers who put it into words.

I'm a fan of the Dead and Jack Kerouac. When Dennis came to Lowell, MA to speak about Kerouac and discuss aspects of his life. About an hour before the event was to start I had arrived at the place where Dennis was speaking and I met Dennis waiting for the event to start. We had a wonderful conversation about the Dead and Jack . Dark Star Orchestra was in town the night before and he mentioned going to that show. We also spoke about his family members who live up the Street in Andover. Dennis was a very nice person to sit and chat with, and I thoroughly enjoyed our conversation and meeting. Of course I own his books and got him to sign one of them for me. Dave Nelson

Man - I cant believe the morning I'm having - just sit down do do some surfing and found this treasure! Soooo happy right now.

This past month or so, while everyone was debating who is who is not part of the "original" Grateful Dead, I mostly smiled to myself because, for me, The Grateful Dead were ALWAYS more than the guys on the stage...The Grateful Dead was/is an organization of individuals who put together the entire experience...from the famous members like Jerry, Bobby, PigPen...or even Kesey or Owsley...or Hunter/Barlow...to others most people didn't know...like Healy or Ramrod or Scully...or, my personal favorite...Dennis McNally! In 1989 while an intern for a non-profit environmental media organization, I wanted to do a story about Bob Weir's work with "The Rainforest Action Network" so, like many nutty Deadheads did...I wrote a random letter addressed to P.O. Box 1065 wondering how I might get an interview with Bobby at the coming shows in Chicago. I got a phone call in return from Dennis McNally who politely explained that the band typical does no interviews on the road but instead sent me a video clip of Bob talking about The Rainforest Action Network! I was blown away and thanked Dennis with all my heart...it was SO COOL! Over the years I stayed in touch with him and along the way met some other "not famous" members of The Grateful Dead and when I had a cup of coffee with Dennis in San Francisco in April of 2014, we had planned for an hour to discuss his help in promoting my book, we ended up chatting for almost 3 hours about "back in the day" and it felt as good and real as my conversations with ANY OTHER Deadhead around my age (he's a tad older)! I owe a most Grateful thanks to Dennis for helping me on my to the first night of the last stand in Santa Clara but even more...I owe my Love to Dennis for being an inspiration to me...he is the writer/author of The Grateful Dead, I hope my phrases and words are as magical as his are...Thanks Denis, you are MY favorite member of The Grateful Dead!
7 comments
sort by
Recent
Recent Oldest A to Z Z to A
Reset
Items displayed