So he volunteered to create a musical piece using vibratory information picked up by ultra-sensitive accelerometers from different parts of the magnificent structure as his base elements. Penn State’s Mark Bellora helped translate the sonic data (as he has on Mickey’s cosmic sounds), and Ben Yonas and Jonah Sharp aided Mickey in shaping the sounds and making them musical. The current Mickey Hart Band (of which Yonas is a member) also worked with Mickey to find ways to create a seamless work based around the sonifications.

The end-result—a piece Mickey estimates will be about 20 minutes long when it’s completed—will be unveiled on Sunday, May 27, at what is expected to be a huge celebration of the Golden Gate Bridge at Crissy Field in San Francisco (and stretching all the way down past the Marina). All sorts of festivities will be going all day and evening in the area (fireworks at 9:30!), culminating in a set by the Mickey Hart Band at around 10 p.m., when he will debut his homage to the Golden Gate Bridge. Hundreds of thousands are expected to attend over the course of the day and night. (If you’re going, don’t even think about driving there; use public transportation!)

On Wednesday morning, May 23, I chatted briefly with Mickey about the project, which was still a work-in-progress, but nearing completion.

So, Mickey, is it a come-down to go from working with the sounds of the Big Bang—the beginnings of the universe—to the Golden Gate Bridge, made by mere mortals?
[Laughs] No, no, not at all! They’re both part of the vibratory universe. And even the Golden Gate Bridge is a mystery in its own way. It’s a sound mark that needs to be heard. And since it is its birthday, I was thinking that instead of just composing a piece to it, or for it, I’d let it sing its own song. That was the first thought.

Once I acquired the vibratory information from the bridge, I set in motion the composition.

Who approached you about it originally?
[Laughs] Are you kidding? Nobody approaches me about these things! It’s not like that: “Hey, Mickey would you like to sonify our bridge”? These things just come to me and then I see how far I can go with them.

I first got the notion of doing something using the sound of the bridge way back in the late ’60s coming back from the Carousel [Ballroom] and the Fillmore. I’d be driving back home [to Novato, in Marin County, across the Golden Gate Bridge] late at night and I started tuning into the bridge, so to speak. We’d play three or four nights a week in the city, so I was doing this a lot. At some point I started pondering what the sound of the bridge was. Sometimes in the morning, if I was in the right frame of mind, I thought I could actually hear it.

I went on the bridge twice to try to do some recording with my Nagra [tape recorder]—I think one of those times I was with Tom Paddock or John Cutler—and both times I was… escorted off by the police. [Laughs] This was in the very early ’70s. I went on there with a big rubber hammer to try to “excite” the bridge and primitively record it with a microphone, which was totally irrational, and which would have been really difficult to do correctly at that time. Then, I went to the Bridge Authority and they laughed me out of the room: “No, no, no; not on our watch!”

So I put the dream on the backburner, but with the coming of the 75th birthday of the bridge, and now that we’re recording in the digital domain it’s easier to tap into their accelerometers, which they have all over the bridge to measure stress. It’s vibratory stimuli coming off the bridge. They have all this sophisticated seismic information at the Geological Society, and the bridge is also monitored 24 hours a day for stress. So I take those readings, sound design them and make music out of them.

How as it different from what you did with the information from space?
Well, this was already sound, some of it above and below [the bridge]. I didn’t have to change the form. In the cosmos, I’m changing light into sound and also working with radiation.

What sort of music did the pulses and other information you got off the bridge suggest to you?
I’m still composing it now. You get frequencies and sounds and you have to place those in a proper environment so you can hear them. A lot of it is rumble, and up seven or eight octaves you might get a tone, and in that tone you might find a tonic or maybe a fifth that reveals itself to you. Then you follow it. It’s like an adventure movie, where you see something and that inspires you to do something, and one thing leads to another. And then, of course, your imagination plays into it. Because I’m not literally translating the sound. That’s not my job as an artist. I’m creating an opus—a musical offering—around that.

How musical is it?
It’s very musical. Some of it you’ll be able to hear as the bridge itself, and then I’ll also be using some of those original sounds in musical settings, and then other times I’ve taken stimuli from the bridge and made it into something musical you could never tell that it came from the bridge.

Are you doing this alone or are you working with the whole band?
The band will accompany part of it. We’ve been working on it on the road in soundchecks. I’ll introduce some of the bridge sounds and then they’ll react to it—the same way we worked on the cosmos stuff together. It’s great. We’ve been going 20 or 30 minutes every day, finding the song.

Will people who cannot actually make it to Crissy Field to get to hear this?
Of course! I’m sure we’ll offer it as a free download at some point. There are going to be a lot of people at Crissy Field, I understand. We have a giant P.A. with big Meyer subs; it’s going to sound fantastic. And the speakers will also go down the Marina and the [Marina] Green from Crissy.

We’ll open the concert with that piece and then I’ll also play the bridge in some of our regular tunes. 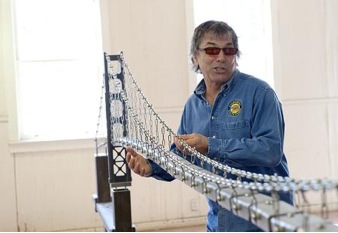 Mickey and his musical model of the bridge.

I gather that model of the Golden Gate Bridge I’ve seen in the publicity photos will be used as a triggering device?
Right! I thought, instead of taking the sounds and putting them on pressure-sensitive pads, a great thing would be to use an actual bridge—a 300:1 model, 23-foot stainless steel bridge that moves like the bridge. So the amazing folks at the Exploratorium [science museum in SF]—where I’m now a board member, I might add—built this amazing bridge, which I call “Bridget.” [Laughs]The model has been rigged for sound and now I’m fine-tuning it for the performance. In fact, as soon as I get off the phone with you I’m going to go back to working on Bridget!

How will you play it?
I will pluck. I will bow. I will gently strike. I will coerce. It also sways, as the real bridge does, and that is a rhythm as well. So I will be doing all these things, in real time.

I wonder how many times you’ve driven across the bridge.
Thousands; many thousands. It’s an uplifting feeling for me. Seeing it in the morning, especially if you’ve been up all night playing. The city is shining. Maybe there’s fog, or maybe not. Or you come in to the city and maybe you’re not in the best mood for whatever reason, you see the bridge and the beautiful city beyond. It’s an emotional get-off. I’ve always loved that bridge.

To celebrate the event, the Mickey Hart Band are giving away 3 live tracks of "Friend of the Devil", "Fire on the Mountain"  and "Bertha" from the Above The Clouds 2012 Tour.  To listen and download, go to Mickeyhart.net.

I hope someone captures this captures this in high quality sight & sound for those of us on the East Coast to hear. I doubt Mayor Bloomberg would allow this on the GWB, Brooklyn or Manhattan Bridges... could you imagine?? Enjoy SF !! Share the first hand experience please... great story Blair (as usual...thanks!) iGrateful

so where's a deadhead go to hear that 20-minute sonification & how did it go yesterday?

Mickey is creative for sure

If you want to hear a sonification of the universe, listen to track 7 of Acid Mothers Temple CD "New Geocentric World". enjoy...

I fixed it. I plead dyslexia! OK, I plead carelessness!

The performance, and the