home > features > Documenting The Dead: "The Art of Business: Laminates and Backstage Passes"

The Art of Business: Laminates and Backstage Passes

This week’s entry continues the exploration of the Dead’s business practices by focusing on an aspect that has generally escaped critical scrutiny but always been a prize for fans: the laminates and backstage passes that provided employees and lucky guests with backstage access. The significance -- and numbers -- of those colorful badges and cloth stickers make them substantial enough to be grouped as individual subseries of the Archive; along with tickets, they form a separate series that is one of the most interesting and significant sections of the band’s collection at UC Santa Cruz. Viewed together, these artifacts tell a remarkable story about how the band approached the defining aspect of their career, the concerts they performed and the tours they mounted.

Both passes and laminates had humble origins. All bands need to control access to the stage and backstage areas, but for the Dead, that was especially critical, given the nature of their extended scene. Laird Grant, one of Garcia’s oldest friends and a vital crewmember in the band’s early days in the Haight, was one of the first to shoulder the unenviable task of policing the stage; even in 1966 that was a challenge, and over the decades, it would only grow more difficult -- and vital. Laminates and backstage passes quickly emerged as the most efficient way of determining who should have access, and how much. The politics of access would be a constant theme throughout the band’s history, but the evolution of the passes and laminates, as talismans of that access (and those politics), makes their series one of the most interesting in the Archive. 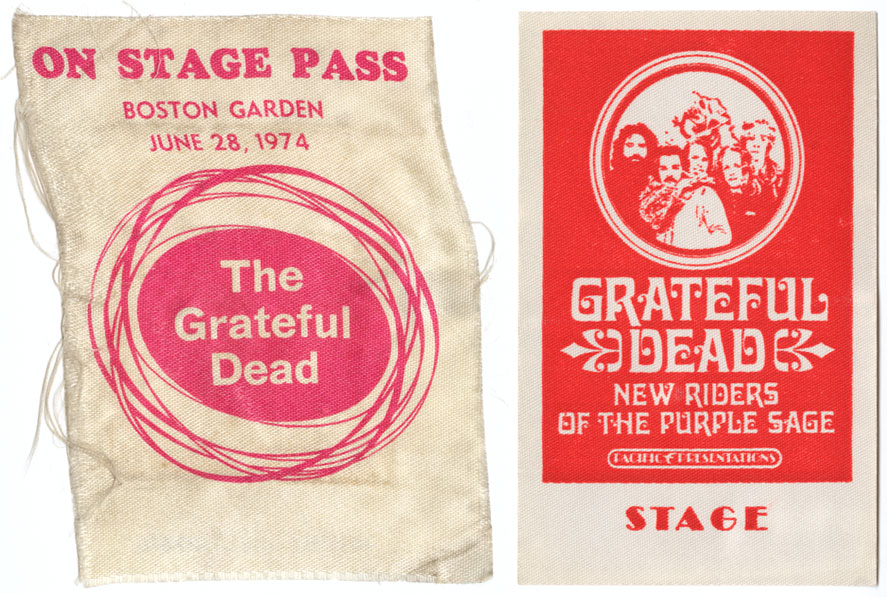 The earliest examples in the Archive date to the 1970s and were created by promoters, according to band insiders. These efforts tend to be simple: a logo or a few lines of text with perhaps a graphic, sometimes associated with the band but not necessarily -- some promoters opted to use their own logos, or a graphic associated with the venue. This made sense initially, but as the band’s popularity grew, the crew needed to have better control of who had what access. The Dead’s trajectory in the 1970s -- and during their entire career -- was toward increasing mastery of every facet of their touring operation, and over time they took control of laminates and passes, which launched the increasingly artistic efforts that really define the Archive’s holdings.

Those efforts show how the sophistication that came to characterize the laminates and passes was both practical and artistic, making them a seminal expression of the band’s creative approach to their business. As the band’s success grew, so, too, did their backstage entourage -- and so did the need for security. Laminates were tightly controlled, for many reasons: they provided the greatest access, including to the stage and to the band members’ private areas. They also did not require the bearer to have a ticket, unlike backstage passes, which also made them quite valuable -- especially when they were valid for a run of shows, or an entire tour. In one of the few later pictures of occasional band lyricist Bobby Petersen, he is proudly showing off his laminate for the 1986 spring tour -- a statement of how the band continued to honor their old friends and colleagues. Petersen’s beaming visage also speaks volumes about the attitude toward community that the band evinced, and built into their business -- as the passes and laminates demonstrate. They are tokens of the community the band fostered, and often from and by that community as well: not just the artists who worked with the Dead in the Haight and after, but their own families as well -- a few passes even feature band members’ children’s doodles. 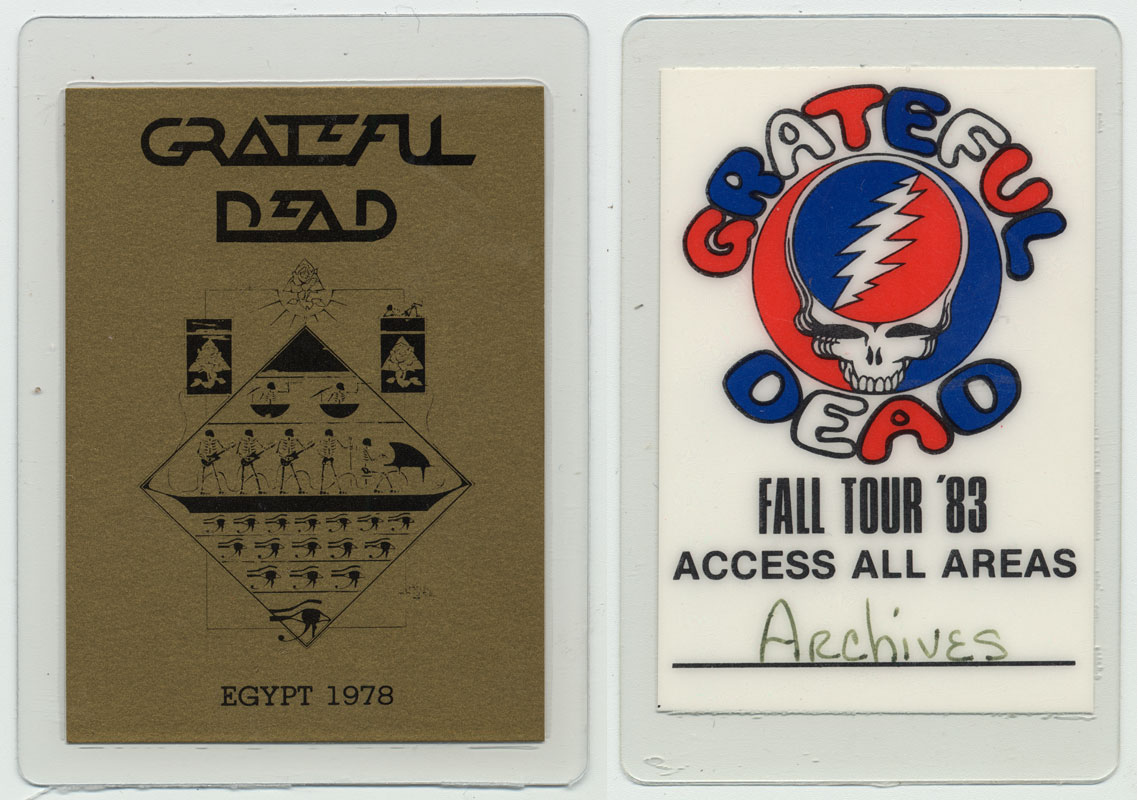 What most emerges from time spent with this part of the Archive is the enormous investment that the laminates and passes represented, both commercially and artistically. While laminates served a very real function, and their value merited hiring artists like Timothy Harris to handle them at a very high level, backstage passes were simply additional expenses. Yet the band made it a significant responsibility to oversee their production, and made a substantial investment to hire artists and license images.

The art that resulted is remarkable, and merits attention. Most of the images tend toward the iconic, in keeping with the size of the badge: both passes and laminates tend to be about two-and-a-half by four inch rectangles, although some are other shapes, such as a circle or even a triangle. The size of that canvas imposed limits as to what graphics would be effective, for their purpose was to provide easy, instant recognition by stagehands or security staff. Most feature powerful, simple ideas like a dog’s head, or the silhouette of a horseman against a Steal-Your-Face moon. Some were familiar illustrations, perhaps slightly adapted—the winter 1979 tour laminate was the cover of the recently-released Shakedown Street, for example. Others might reproduce the simple advertising graphic supplied to local newspapers before a show; better efforts might be the poster for a show or run, or a simplification that it worked as a smaller image. 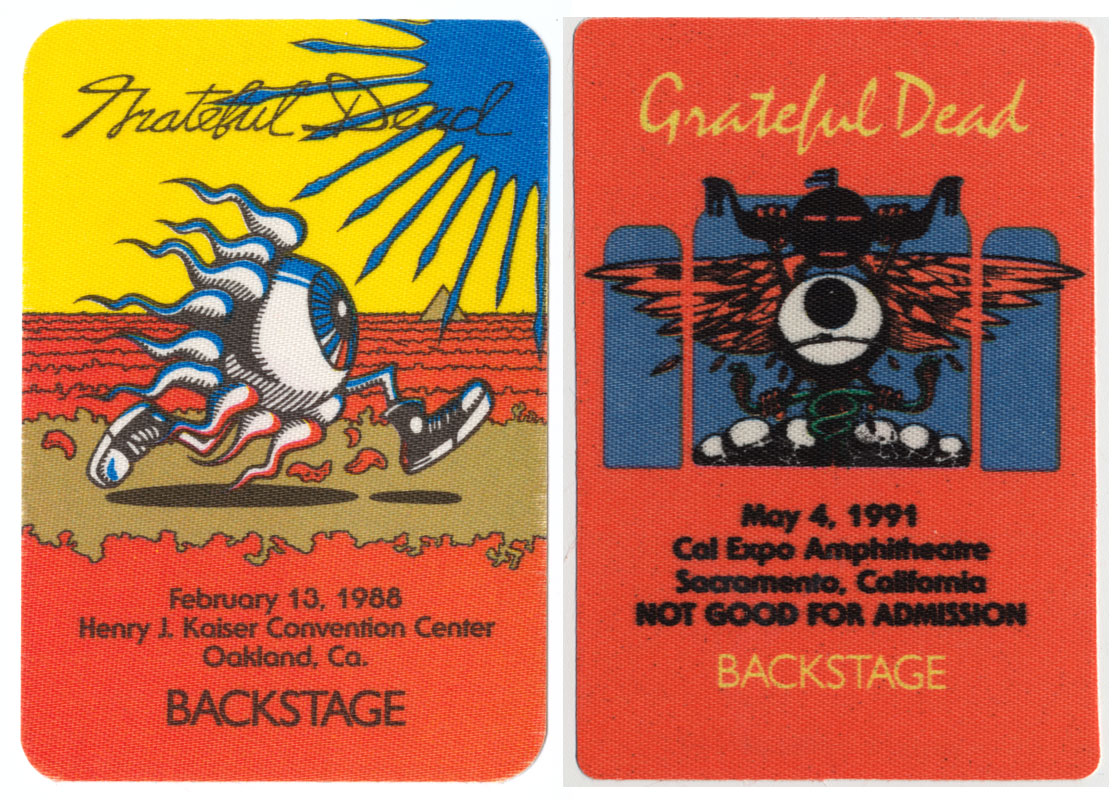 Over time, the art on passes and laminates deepened the Dead’s image bank in creative and powerful ways. Some designs isolated elements from well-known posters: Rick Griffin’s work especially lent itself to highlighting a motif from his intricate and powerful illustrations, like a winged eyeball on the run. Other sophisticated examples of creative reuse merged Dead iconography with other themes, such as the laminate for the Frost Amphitheatre shows in August 1983, which fused the Dead’s Steal-Your-Face with a stylized academic seal, a nod to the Frost’s home, Stanford University (see Fig. 7). Some images are homage: one series of backstage passes features photographs of horror movie icons; another features Marvel Comics characters. Both of those speak to deeper currents and touchstones in the Dead’s milieu and intellectual heritage, favorites of both Garcia’s and several others in the band’s circle. The fact that the band would expend the effort to work to secure permission for those -- and they did -- speaks to how seriously they took even a disposable gift like a backstage pass. That care in turn shows how these pieces of ephemera represent an inextricable part of the ethos that defined the band.

While most of the backstage pass and laminate imagery is a straightforward statement -- a snapshot, an icon, a moment -- some are denser, with richer associations. Many of artist Tony Reonegro’s backstage passes fit together to form larger images, like stylized jigsaw puzzles. Viewed that way, passes that isolated and redeployed well-known Dead imagery form a kind of extended collage, one that relies on viewers to imagine how they might fit together or illuminate the original -- and that challenges collectors to track them down and piece them together. But all of them work together at a certain level: together they comprise an overlooked, almost private history of the band, recounted in hundreds of colorful little chapters that form a longer narrative documenting the band’s performing history.

Some of that was deliberate. Timothy Harris’s work layered meaning in his designs, imbuing each element with a symbolic connection, either to the theme of the image or tour or to the band’s history. Sometimes those elements spanned contexts, or linked them together in startling and evocative ways: his powerful “Sleeping Lion” made a nod to both Garcia and to funerary art, an especially appropriate connection for a band whose name invoked an ancient folk motif about the obligation of the living to the dead.

That ancient connection also suggests another way of looking at this art, as a kind of modern heraldry—a connection made explicit in one memorable Reonegro effort (see Fig. 11), evoking a medieval German coat of arms with a delightful series of puns and twists on Dead imagery. Heraldry documented privilege, just as laminates and passes documented access, a prized commodity in the world of Dead tour. The best efforts were those created specifically as passes or laminates: Timothy Harris’s work was even gathered into a book, Access All Areas: Backstage with the Grateful Dead (1998), with a fine accompanying essay by longtime Dead journalist and writer Gary Lambert. Blair Jackson wrote a thoughtful essay on Reonegro’s work for Dead.net which contains a wealth of detail about his art and the way that backstage passes were commissioned. 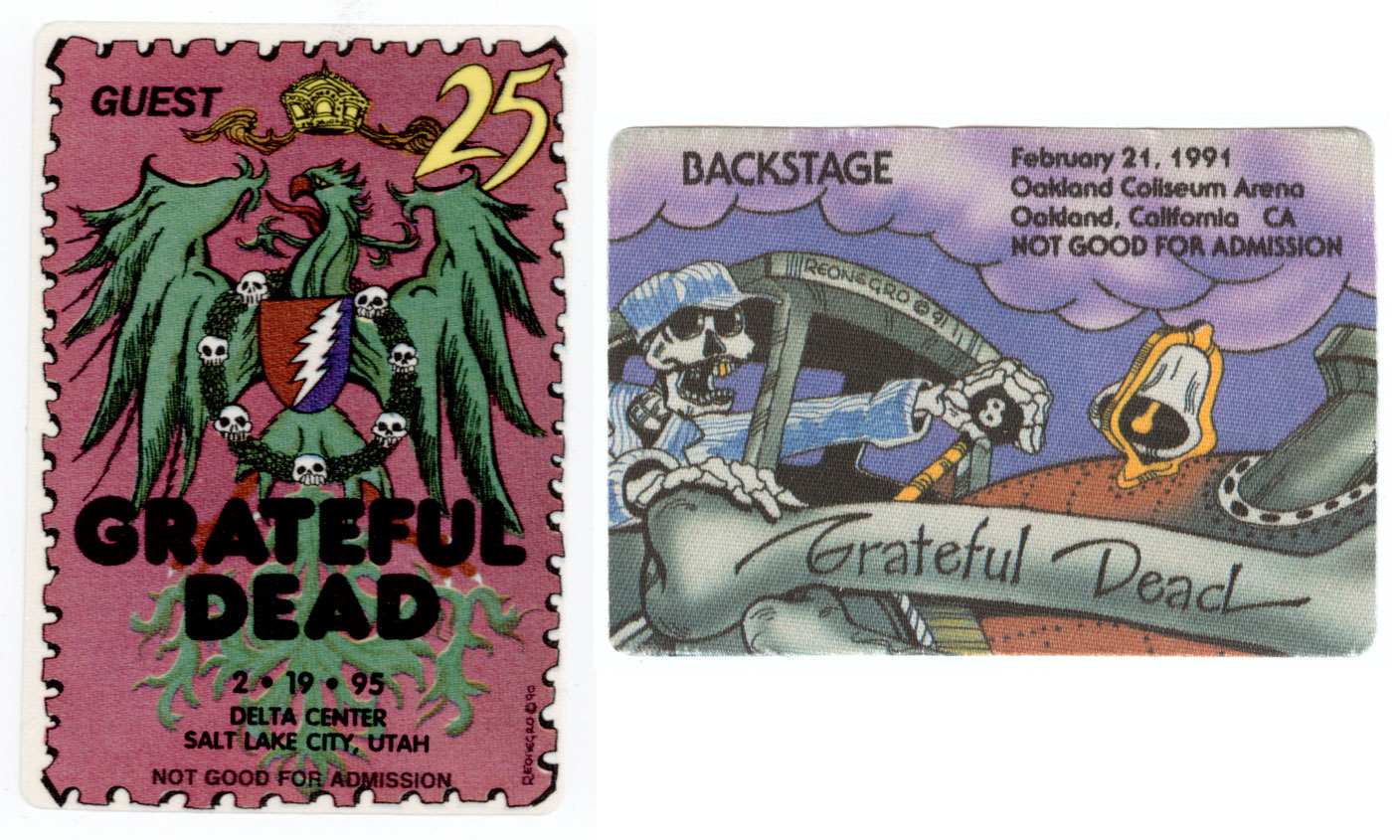 Laminates could be issued for single shows, runs, or entire tours, but far fewer were produced than backstage passes, which were necessarily keyed to a particular show. The number of shows the band played made backstage passes a particularly expressive artistic canvas, and in time, that image bank grew to encompass most of the themes and motifs that embodied the band’s ethos. This is what makes the laminates and backstage pass subseries such a remarkable part of the band’s Archive: as artifacts and evidence, their significance goes far beyond their function. Together they are a vital and evocative expression of how the Dead’s unique approach to their business came to embody, and define, such a rich dimension of postwar American culture.

Can anyone actually see these figures or is it just me?

they're showing fine for me

what browser are you using?

okay, I'll report this to the tech folks

IE folks (and others)

We think this is fixed, but please speak up if you're still having issues. Thanks very much for the heads up.

Fixed it on my end

Many thanks Marye and the tech folks.
6 comments
sort by
Recent
Recent Oldest A to Z Z to A
Reset
Items displayed