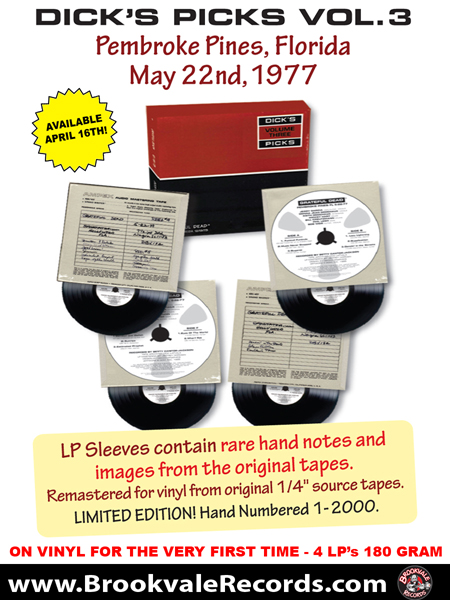 Dick's Picks Vol. 3 and Vol. 4 will be released on limited edition 180 gram vinyl by Brookvale Records on April 16th. All copies are will be hand numbered. The edition is limited to 2,000. Get yours before they are gone, gone, gone.

Get your copy here. 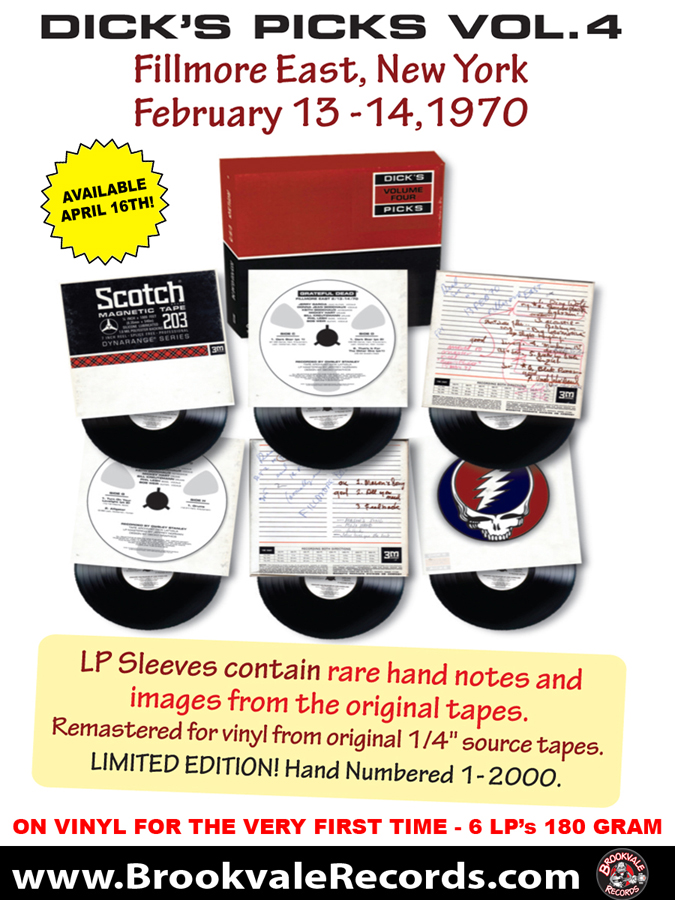 Worth their weight in gold

These particular vinyl releases that use the original master tapes (thank you, Brookvale Records!) absolutely smoke the CDs. Now, of course I can only say that given that I've compared them on my system which is more of typical high-end nerdy audiophile rig. But just in case anybody has been on the fence about dropping the coin on Dick's Picks vinyl, these are the two to own. Have I been tempted to pick up the first two Dick's Picks on vinyl? You bet I have. However, I'm still hampered (perhaps psychologically) by the fact that the original analog reels were not be able to be used for the mastering process. At the very least, I'll certainly salute the President / CEO of Brookvale Records for two things: 1. He has been totally transparent about not being able to use the masters for the first two releases. This stands in stark contrast to the numerous vinyl reissues by lots of labels that are cashing in on the vinyl resurgence. More than a few of these labels are not revealing what their sources are for their new vinyl 'reissue'. Why? Because they're not using the original analog tapes for their new vinyl 'reissues'. Sad but true. While his competitors fib and obfuscate, Brookvale has been nothing but truthful 2. A huge tip of the hat for taking on this project at all. Could anybody here ever have imagined that you would have access to anything close to the analog masters of these shows? Short of commercially releasing Dick's Picks in the obscure reel-to-reel tape medium (and no Virginia, I'm not talking about cassettes here), you're not going to get any closer to owning, much less hearing, the masters And before anybody starts up, 'yes - it is all about the music' (although Marshall McLuhan might have disagreed with that statement). When I was growing up I sincerely enjoyed sitting around with friends in a park listening to horrible sounding audience tapes on a boom box with its batteries slowly dying. Those were very special moments. But even today, I have similar moments (that are perhaps even more emotionally thrilling in their own unique way) while listening to the spectacular performances contained within Dick's Picks Vol 3. and Vol. 4 in an inscrutably analog medium, on a my nice little hi-fi rig in the comfort of my own home. So yeah - these releases are HIGHLY recommended. 5 Clams, all the way.
1 comments
sort by
Recent
Recent Oldest A to Z Z to A
Reset
Items displayed