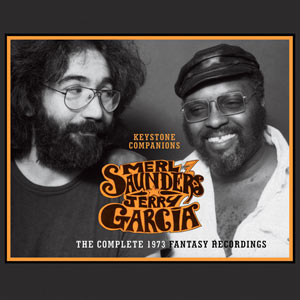 Fantasy Records in conjunction with JamBase will be giving away 6 of the Merl Saunders & Jerry Garcia Keystone Companions box sets.

To enter, go to keystonecompanions.com between October 1st & November 12th and simply provide your email address. One winner will be randomly selected on the Dead’s second favorite holiday - October 31st and the remaining 5 at the end of the contest on November 12th.

As an added incentive to enter, Fantasy and JamBase are offering a free download of a previously un-released version of “Keepers,” one of the highlights of this historic session! 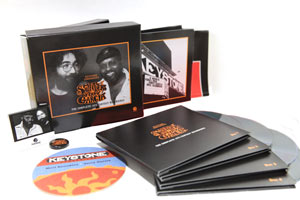 MORE ABOUT THE BOX

San Francisco-born keyboardist Merl Saunders had been writing and performing in New York before returning to the West Coast. Producer Nick Gravenites offered him studio work that included playing with guitarist Jerry Garcia, already at the helm of one of the world’s most popular rock bands, the Grateful Dead. “Garcia reminded me of [jazz guitarist] Eric Gale,” Saunders recollected, “Anything he played was very musical. He knew how to do a rhythm on any kind of tune — gospel, blues, jazz. I was amazed.”

Saunders also helped Garcia expand his harmonic knowledge and even showed him some Art Tatum runs. “He taught me music,” Garcia said of his friend.

By December 1970, a weekly jam session featuring Saunders, Garcia, Kahn, and Vitt had become a weekly gig at San Francisco’s Matrix. Of course Garcia was already a major figure in the musical counterculture as lead guitarist for the Dead, so he kept this new band low-key — so much that it never really had a name (although it was referred to as The Group at times.) As Garcia said, “I couldn’t take the pressure of being a double celebrity. It’s a drag just being it once.” (That didn’t stop the itinerant Garcia from having a third band as well, Old and In the Way, with David Grisman, Peter Rowan, and Vassar Clements.)

Live at Keystone, originally released as a double LP, was recorded by Grateful Dead associates Betty Cantor and Rex Jackson; all four artists are credited as producers. Additional material was released as Live at Keystone, Volumes 1 & 2 in 1988. Keystone Companions/The Complete 1973 Fantasy Recordings assembles the original recordings and presents them, remastered, in the order in which the songs were performed at those two shows. The repertoire spans blues, rockabilly, jazz, funk, Broadway, Motown, two Bob Dylan songs, and Jimmy Cliff’s immortal “The Harder They Come.” Some songs appear twice, providing the opportunity to hear how the band kept it loose and fresh.

As Gans notes, “This music is as exciting and satisfying 40 years later as it was on the day it was made.”

Fantasy Records has also reissued, on multi-color double vinyl LP, the first Saunders/Garcia album Live at Keystone. Get it here.

Keystone Companions Listening Party - What Happened to this ?

This was posted on Sept 18th on the Listening Party, and gone the next day ? ? Keystone Companions - The Complete 1973 Fantasy Recordings We welcome you to hear the following tracks from Saunders/Garcia - Keystone Companions/The Complete 1973 Fantasy Recordings. "Hi-Heel Sneakers" "Positively 4th Street" "That’s All Right Mama" "Merl’s Tune" Click here to Listen http://www.dead.net/features/listening-party/keystone-companions-comple…

glad to see this release highlighted on dead.net. I was wondering about the prior silence concerning this box set. The sound is great and there are 7 new tracks, previously unreleased. The goodies in the box are fun for collectors. The music, of course, is amazing and comprises a tour-de-force of many styles and genres. The jams are highly inventive and certainly underscore the jazzy direction the Dead were taking as Jerry evolved and progressed as an outstanding musician who could play any style in his own signature way. David Gans gives a wonderful insight into what was happening musically between Jerry and Merle. Highly recommended to those who don't know what this was all about. Now lets post a discussion about the new, upcoming Jerry live release.

Well, the site is a total shambles at the moment. Jam of the week - when I can find it - doesn't work. Main links at the top seem to be a totally random selection. Why Road Trips? Why no Store link (seems IE can show this but not Chrome or Firefox!). Ah - now I can see "Store" when I hover over "Band". But when I go to click on "Store", I get the floating submenu for The Archives. Right bloody mess! Oh. And a post I made y'day on the DP4 thread has disappeared into the ether...

I have to agree with you, listening to this R/M MS+JG Live @ Keystone Box Set now for the 1st time. Very nice sounding, glad I bought this even tho I have the other 3 CDs. The extras are nice too. Amazon has a good deal at $25.99 w/ free shipping if anyone is looking to pick this up.

what browser are you using? I'm not seeing what you're seeing.

how is this set diff than the

how is this set diff than the original other than the remaster?

some of my favorite stuff

This company has control of all Dicks Picks releases, for some reason,they are selling them at highly inflated prices, all other music they have,lots of oldies and stuff is sold at a reasonable rate,maybe it was because of how much Warner Brothers(Rhino) sold them to them. Check out this link, they have about 10 releases ready to ship. http://realgonemusic.enstore.com/browse/1?query=Grateful+Dead

amazon is still the place

My box just arrived. The sound quality is top-notch. The pictures in the booklet and in the cd covers are priceless. It was great having a hassle free order. I guess I had just gotten used to my orders getting lost or taking months to arrive from dead.net. It's reassuring that there are companies out there who value their customers and pride themselves on customer satisfaction. Here's to Merl and Jerry!!

This is a great box. Lets not forget that the Jerry Garcia Live release is on the near horizon for Nov. release. No info. about it here for some reason. With Dave Picks looming also-lots of good stuff coming shortly!
11 comments
sort by
Recent
Recent Oldest A to Z Z to A
Reset
Items displayed