We told you we had an ace in our pocket and we're calling this one THE ANGEL'S SHARE. No evaporation here though. While there may have been ingredients vital to the creation of WORKINGMAN’S DEAD that were lost and did not end up on the final album, they've come a-bubblin' up and we're more than pleased to pass the bottle around.

Compiled from dozens of 16-track reels that were recently discovered in unlabeled boxes, THE ANGEL'S SHARE includes outtakes for every song on the album, which have been unheard since they left the studio over 50 years ago. Under the supervision of David Lemieux, engineer Brian Kehew and archivist Mike Johnson spent countless hours compiling and piecing these reels together to create the final opus.

So let's step into the studio, shall we? THE ANGEL'S SHARE transports us back to 1970 to the Pacific High Recordings Studio in San Francisco. Here we'll sit in on over two-and-a-half hours of unreleased partial and complete studio outtakes and be fly-on-the wall privy to insider conversations from the WORKINGMAN'S DEAD recording sessions. We'll hear discussions of pacing and arrangements, “talkback” from the studio to the control room with the album’s producers, Bob Matthews and Betty Cantor-Jackson, and even the shuffling of feet on the studio floor. We'll witness stripped-back instrumental takes lending new beauty to "High Time," and heightened joy to "Uncle John's Band," catch "New Speedway Boogie" settling into a steady groove, Pigpen prowling and howling his way through "Easy Wind," and top it all off with a blazing "Casey Jones." Hot damn, hot damn!

It being 50 years ago and all... The finished versions being in our DNA now, it's great to be able to see/hear the process.

Whose idea was it to leave Google Play Music/You Tube Music subscribers out in the cold? Get your shit together.

I agree with MaryE this is Fascinating stuff!

If you listen you can hear them talking about how long New Speedway Boogie is at one point, and they agree that's too long. Why? because they were making a record. At this point they knew the song order and how much time they had for each side of the album.

Bob & Betty had put together the run throughs of the songs from the early sessions and cut together a tape of what would be Workingman's Dead. Gave those to the band and the band rehearsed the tunes for a couple of weeks went back in and nailed it.

This is the band nailing it. And creating one of the greatest albums ever.

What a treat, thanks so much for sharing this wonderful newly discovered and never-before-heard material from one of the most pivotal moments in the bands long and illustrious history!

It seems that streaming this via Amazon requires a $8/month subscription to Amazon Music Unlimited. There doesn't appear to be any way to listen to it with a "simple" Amazon Prime membership (that merely costs $120 a year). I love the Grateful Dead, but I'll be damned if I'll pay Jeff Bezos more money so I can hear these rehearsals. How greedy can you guys get? 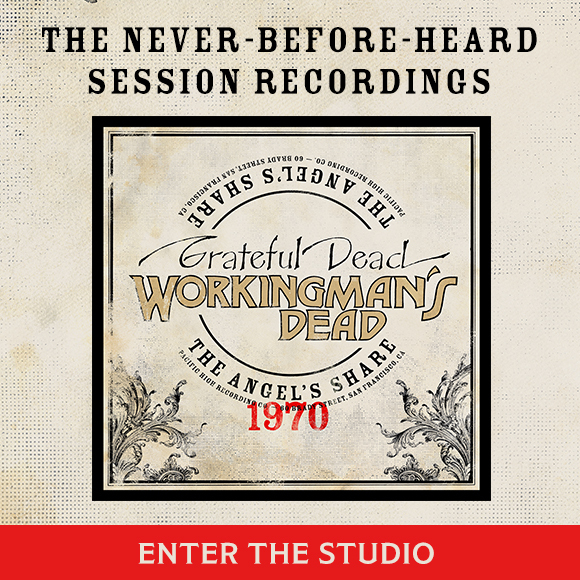