home > features > Mickey on Haiti: “My Heart Was Breaking Over This”

By Blair Jackson
On Saturday, February 13, Mickey Hart and a host of musical friends will be headlining what is sure to be an incredible night of music at the Fillmore in San Francisco: Heartbeat for Haiti is a very reasonably priced benefit concert to raise funds for a grassroots organization in Port-Au-Prince called the What If? Foundation, as well as Partners in Health. Mickey is putting together quite an array of musicians and singers for his part of the program, including Global Drum Project bandmates Sikiru and Giovanni Hidalgo, and singer Rebeca Mauleon (a talented and charismatic member of previous Hart groups). Other acts appearing on the bill include Big Head Todd & the Monsters, Brett Dennen and Amos Lee. Tickets are available here while they last.

I recently grabbed a few minutes of Mickey’s time to talk about the benefit and about the music of Haiti.

I know that you feel that Haitian music and culture was very important and influential on the development of American music. Tell me a little about the connections.
Music from Haiti was a major catalyst for the explosion of music in America. As you know, the black diaspora—the slave trade—brought all these different kinds of music from West Africa—chants and powerful trance rhythms; what they call the “rhythm of the saints.” It came into Brazil and then into Central America and the Caribbean. 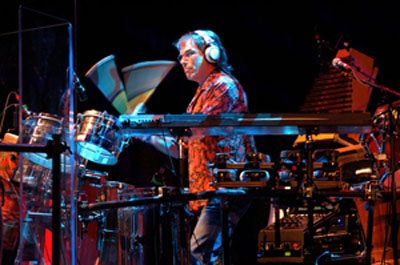 Photo: John Werner
There was a free slave revolt [in Haiti] at the end of the 1700s and a whole bunch of this music and these people went from Haiti to New Orleans.Unfortunately, once they got there, a lot of the instruments were taken away from them because these were powerful chants used mostly for prayer—for possession trance and all that—and the [French colonial rulers, and then, following the Louisiana Purchase, the American powers-that-be] were afraid of it. But they let them practice it one day a week on Sundays at two places—in Congo Square [in New Orleans] and at Lake Pontchartrain—and they were observed, so they couldn’t go deep into trance. But it was the beginnings of a lot of what we call American music. Eventually it went up the river to Kansas City and Chicago and it made it to New York. And Jelly Roll Morton and all those early New Orleans musicians were spawned, in part, on music that came from Haiti originally. So Haiti is part of a major musical tradewind. It’s powerful, powerful music.

How did Haiti sharing Hispaniola island with the Spanish (what is now the Dominican Republic) affect the music?
It all kind of came together. People were visiting each other and marrying, so you have a real fusion of cultures. It wasn’t a collision. They all shared a common bond and that was West African music. Haiti had more French influence, of course. And more of that went to New Orleans.

This benefit is going to honor many of those music and spiritual traditions that came from the Caribbean.

It looks like it will be another of your amazing pan-cultural things with Rebecca Mauleon and Sikiru and Giovanni Hidalgo…
They’ll be there, as will Gabe Harris, who plays djembe, Linda Tillery and the Cultural Heritage Choir, Raz Kennedy… all these wonderful voices. And we’re going to perform a lot of the chants that came out of Haiti and the Caribbean.

Are there well-known Haitian percussionists?
Not really. They’re mostly folkloric, and then there are the ritual guys and they never get out

By “ritual” do you mean the Vodou side?
Yes, that’s what it’s all about. That’s part of their traditional religion. I think close to 90 percent of people still practice that in some form. The music is such an important part of it, too. It’s the rhythms that allow them to connect to the Creator in their world. People do it in different ways in different cultures, of course. In Haiti, and many other places, they do it with large cylinder drums and dancing.

Are there some drums that are unique to Haiti?
Sure. One of my favorites is the rada, which is a family of three drums—“mother” [the mamon]which is the largest, “father” and “the baby.” And it’s played as a family so its both metaphorical and symbolic. They’re very hard to play, but Giovanni is one of the best in the world at it. It has two very distinct tones—one is very high pitched and the other is a very low, flat sound. One head is really loose and the other is really tight—it’s like hitting pavement! You have to be ready to play rada. It’s not one of those things you walk up to casually and play. It’s a real physical feat to be able to play it well.

How did this benefit show come about?
A lot of people were calling me—they all had this feeling of wanting to do something for Haiti. I wanted to do something; my heart was breaking over this. We located this great organization called What If?, and we vetted them quite well and learned that they’ve been on the streets of Port-Au-Prince for 20 years, bringing food, water. It’s a real direct way to get aid to the people.

And everybody volunteered for this. No one’s getting paid anything. There’s no superstructure—there’s no administration; nothing. We’re just going to take all the money and put it in their hands and let then do what they do. So it’s the biggest bang for your buck, and it’s a really good way for you to feel good and me to feel good, and everybody else who’s participating whether they’re buying a ticket or playing it to feel good. It’s also a great feeling to come together as a musical community, because a lot of these people don’t get together that much, because it’s not really commercial music. But it’s a really soulful experience drumming-wise and being in the rhythm of the moment and all very focused on the task at hand—which is to raise a lot of money for a place that has really gotten a bad deal on a lot of levels, for many years, even before the quake.

The silent auction should raise some good money, too.
I hope so. We hope to have an online silent auction as well, if we can put it together. But at the show we’ll definitely have some very interesting swag to bid on. Stand by for a very cool auction.

Anyway, I really encourage anyone who can to come out for this because you probably haven’t seen anything quite like it before and you might not see anything like this again. It’s going to be a real happening, and it such an important cause.
Display on homepage featured list
Off
Feature type
News
General News
Tags
Haiti
What If?

and good for Mickey. Thanks for the nice interview! (Gabe Harris? Joan and Dave's boy?)

The very same. I can still picture Gabe as a teenager at Dead shows in the '80s. Mickey says he's really talented...

Stopping in today and found this...

With ya.Blair, So glad to read this, thanks. mayre, agreed sounds great! Mickey, This benefit is different...this one offers to take you to Haiti through the roots of music. The way you describe the journey of the music through the land can be applied to many vines of music, culture and hertiage~it's so true. I am glad to learn of your plans for the event. Is there any way to get it televised in Haiti? I am sure the people there could use a dose of wonderful drumming and your guest are so talented, I have seen them. The Fillmore has the perfect vibe to embrace the majic and wonder of this special night of music. I really would love to think of how a recording of this played during the reconstruction process could aid them, get someone to record this>(!) Strength and hope to all. It hurts me too, comfort to your friends and their families. I just had to share these thoughts and impossibility of understanding the actual devistation from a livingroom computer chair, so humble am I. It will be a very special night, to be sure. Sending my best, love, faith and hope along with the message. May there be peace in Haiti------{---@ X~~~~~ SherBearw/allmyheart

I don't think I've ever seen him in real life, but as it happened it was at a concert at my college, a lovely spring day in Santa Clara, when his mom announced his impending arrival. Then there was the later song with the chorus "Gabriel Harris, you go to bed now..." I met his dad once at a draft-dodging meeting in LA. One of the most genuinely compelling people I've ever met. Scared the hell out of me that he was going to make my boyfriend burn his draft card and get thrown in jail. So hey, the kid (who's pushing 40 now of course) has interesting genes...

for another great posting and interview. And thank you Mickey Hart for the continued telling of stories on the musical heritage we all share. May the people benefit from the funds raised through "Heartbeat for Haiti".

Margiemassage Awesome fundraiser!! Sorry that I can't make this one.

I'm in line outside the Fillmore

I'm really angry. This black so-called security guard in the grey sweatshirt & baseball cap in the front right has been harassing me steadily for the last hour, apparently for something I said to the man sitting next to me in private. Mickey and Mountain Girl came onstage and left and he still continues to keep me from watching Amos Lee, who I like and have never seen, at all. I've been to nearly 100 shows and know Wavy Gravy and other members of the Grateful.Dead crew and roadies personally, whom I met at Woodstock. I hope he gets fired, and the fat white security lady. Eric Abrahamson, B.S.C.S (candidate) Yale University Class of '71 Pierson College P.O. Box 1112 2057 University Ave., Apt. 47, 94704 Berkeley, CA 94701-1112 510-356-8083 (mobile) 510-845-7342 (work) 510-809-1369 (home) ericabrahamson@aya.yale.ed

if that's your goal it would probably be more effective to address it to the Fillmore's management, as this site has no connection with same.
Band
Mickey Hart