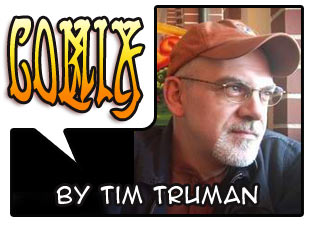 Timothy is well known for the CD covers, concert posters, comic art projects, and T-shirt designs for the Grateful Dead. He has also done a lot of work for friends of the band, including Hot Tuna, Santana, Robert Hunter, and Jim Lauderdale.

Timothy Truman has become one of its most original artistic storytellers and stylists in the American comic book industry. Throughout his 20+ year professional career, Truman has been one of the few artists to make formative contributions to both mainstream and independent comic book scenes.

Truman was to play a key role in developing the independent comics movement of the 1980's. One of those early contributions, Grimjack (co-created with writer John Ostrander), was on the leading edge of a wave of "grim and gritty" comics that subsequently swept through all of American comics. In 1985, Truman continued his tear through the indy comics scene as both artist and writer of Scout, the near-future saga set against the background of a ravaged United States. Both titles embodied a number of qualities that Truman has successfully blended and explored throughout his career -- elements of pulp fiction, science fiction, and blue-collar social commentary.

In 1989, Truman took his brand of seedy, intricately textured, character-driven science fiction / adventure to DC for Hawkworld, for which he received the 1991 European Haxtur Award for "Best Miniseries". His interest in history led him to write, draw, and self publish the highly-regarded graphic novel Wilderness: the True Story of Simon Girty, a biography of the infamous Revolutionary War-era renegade.

Collaborating with writer Joe R. Lansdale, Truman continued to explore Western themes. Lansdale and Truman's brilliant take on DC Western anti-hero Jonah Hex is the stuff of legend, and won a prestigious Bram Stoker Award in 1996. The duo also worked together on The Lone Ranger and Tonto. Truman has done other projects for a variety of publishers, including Dark Horse Comics' Star Wars comic and Tarzan Vs. the Moon Men miniseries. Other comics projects have included the Spider, Turok: Dinosaur Hunter, the Prowler, Time Beavers, Tecumseh!, the Kents, Black Lamb, Justice League: Gatekeeper and Grimjack: Killer Instinct. He has done several cover paintings for limited edition hardcover books from Subterranean Press. Besides contributing artwork to various projects with the Grateful Dead and friends, Timothy is currently the writer for Dark Horse Comics' bestselling monthly Conan title and continues his work as a freelance illustrator and comic book artist.

For more information about Timothy Truman and to see online galleries of his work, visit his website at www.timothytruman.com.