The Mickey Hart Band announces their first tour of 2013 with special guests, The African Showboyz from Ghana. The African Showboyz are four brothers from the northern part of Ghana who fuse a unique blend of West African rhythm, dance, and raw energy. Originally discovered by Grammy-winning virtuoso, Babatunde Olatunji, the African Showboyz have shared the stage with Stevie Wonder, Fela Kuti, Fema Kuti, Arrested Development, and many others. Watch a video of them performing a cover of Bob Marley's Redemption Song in Ghana HERE.

To see video of The Mickey Hart Band performing "Samson & Delilah" with the African Showboyz at the Rex Foundation Benefit, "A Buck Dancer's Choice," filmed on Dec 1st, 2012 at the Fillmore, click HERE.

The Mickey Hart Band is also giving free downloads on their site from the recent Fillmore show featuring special guests Bob Weir and the African Showboyz. To download these songs and more, go to http://www.mickeyhart.net/download. 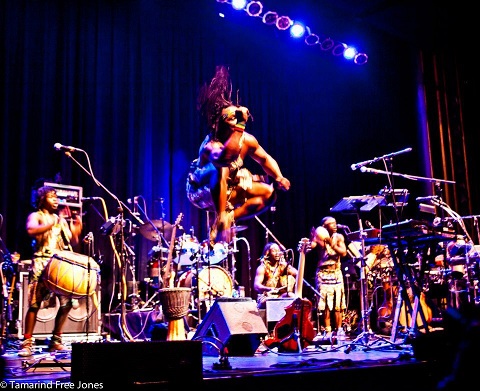 Display on homepage featured list
Off
Custom Teaser
The Mickey Hart Band announces their first tour of 2013 with special guests, The African Showboyz from Ghana. The African Showboyz are four brothers from the northern part of Ghana who fuse a unique blend of West African rhythm, dance, and raw energy.
Feature type
News
From The Road
Tags
Mickey Hart
2013 Tour

With the funraising tour for musical therapy research at the UC San Francisco, which incorporates the African Showboyz from Ghana. I am sure this will be a good and successful tour for increasing the budget for UCSF's musical therapy division. I do wonder what the total amount netted would have done for the $4k per year average per capita income of the poor African country of Ghana had it been earmarked for dispersal in that country. When a bunch of rich white musicians decides to fund some pet project with the best and brightest of a poor countries muciacal talents does this coincide with what is the greatest need for the poor country? Probably not. This is not to say that the Neighborhood Boyz didn't jump at this chance. One wonders if this group of individuals had had a a more aware management they might have cut a deal where programs for the poor were greatly augmented and pushed the country into the middle-middle class of African countries. The point is, it is about what that country needs and not about what Mickey Hart and Baba Olutunji want. In any case, I hope they are successful.

All the projects and bands made up of members of the Dead are awesome. Please consider coming to visit and perform way up and over here in the Northeast!

I can attest that they are DEFINITELY worth checking out.

The BBC reported today that It is widely known that for recording musicians to be considered successful, in most African countries, including Ghana, they must perform in Europe and/or the US. Unless people in these countries give their approval, the there music is worth nothing in their own native country, I suspect congrats are in order for Mickey and Baba. They have put these talented musicians on a level where the should be. I expect that it is too much to ask why they cannopt be appreciated within their own country without the white man's approval. Even Zwarte Piet needs the approval of the Dutch to do his thing at Christmas...

Please bring it east!
6 comments
sort by
Recent
Recent Oldest A to Z Z to A
Reset
Items displayed