home > features > All In The Family: Justin Helton

We're extremely pleased to introduce Justin Helton as our Dave's Picks 2016 artist-in-residence. The Knoxville, Tennessee-based designer has been tinkering around in the arts since his high school days, parlaying his skills into a printmaking business that has created works for a veritable who's who in the extended Grateful Dead family. Find out who originally turned him on to the Dead, which Family Dog members influenced his art and more here.

With just over 10 years in the business, you own a full-service graphic design studio and work with top-tier clients like Wilco and the Outsidelands festival, we'd love to know how you got your start.

It started when I was in college at the University of Tennessee... I'd been doing graphic design in high school and then at a community college here in Knoxville, TN when I went to UT for fine arts. I got really interested in printmaking while in the fine arts program and decided to make my that my focus. Being a huge music fan and seeing hand-made concert posters over the years I naturally gravitated towards making posters. In my junior year, I had a chance to develop a work study for credit hours and approached a local venue about doing posters for school credit (an internship of sorts) and from there it grew. I would get the bands approvals on posters to help promote the shows and the bands and I would sell the posters at the show splitting the profits... it worked out pretty well for me and I got recognized by quite a few bands at early stages in their careers. Doing this lead to the creation of my business Status Serigraph. I designed my posters on the computer and screen printed them by hand in my garage. Eventually I worked my way into a full-time graphic design position at AC Entertainment, a concert promoter who produces the Bonnaroo Music Festival (as well as many other festivals and concerts) and is based in Knoxville as well. I worked there for over 6 years as a graphic designer and finally as the Creative Director before I left in 2012 to pursue Status Serigraph full-time. While I worked there, I not only did my posters on the side for bands (long nights and weekends), I made lots of really great contacts and relationships in the music business... many of whom I still work with today.

Your company, Status Serigraph, does everything from concert posters to fine art to packaging to branding to website design. What part of the process do you enjoy the most and why?

The design process for me is by far the best part of my day. I typically start my process by listening to the band I am working for. I feel that if I can connect to the art the band is creating it will only push my process and output. I listen to the songs and see if there is anything that pulls me in or queues an idea in my head... lyrics often lead to some sort of picture in my head. Also... I love to get out to music festivals/shows and meet new people and see live music. It's amazing to me that people enjoy my work and I appreciate every single person that allows me to do this for a living... it's great to meet those people in person and give them a "thank you" face to face.

Tell us a little bit about how and when you broke into the concert poster business, your first client, where it has lead...

When I started out doing posters for bands and shows... they were typically used for promotion. As time went on and bands liked the designs more they eventually started getting used as merch items. We would make a limited amount (and still do) of the prints to sell at the show. There were a few bands that had me do these for local shows, but I think the first band that had me do a poster for a show outside of Knoxville was Ween. That was the first poster that I did were people started asking me to able to buy it online... so from there I built a website and started selling my prints. This is also where my model of offering the prints I create to people that collected my work as well... I always try and offer an allotment of the prints on my website after the show or event has happened. I feel that this has helped people to discover my work easier and they know if a print sells out at a show, they have a second chance to grab one from me, the artist.

I got into the Grateful Dead through a few different avenues... Jerry died when I was 15, so I was never really old enough to have gone to a show by myself. At one point while I was in high school I worked at a small family-owned pizza place in town. It was there that my love for the Dead really spawned. My manager at the time was a Dead Head and while we washed dishes or made pizzas we had the option to listen to music we wanted to on the stereo. In this environment, I was exposed to so much music. He would bring in Dead albums, live shows on tape, solo Jerry stuff... I mean, it was insane how much he had. Hearing all of that I just fell in love with the music... and started collecting tapes myself. At one point my manager told me he had an old box of cassette tapes and asked me if I wanted it... he brought me a huge box of old shows on tape and I just dove right in. The Dead's music also made me appreciate things that I really had not listened to up to that point as well... bluegrass, Jazz, funk, etc. Eventually I was able to hit the road and see all of the side projects the members were doing... Ratdog, Phil and Friends...

I would have to say that my favorite time period of the Dead is by far the early 70's. I have always been a big fan of Pigpen and the bluesy aesthetic he brought to the mix. The Europe '72 shows and Hundred Year Hall have always had a special place in my heart. Those recordings really got lots of play when I was really starting to get into the band.

Between your work for Bob Weir, Phish, Warren Haynes, Joe Russo, (and the list goes on), you've been a member of the extended Grateful Dead family for quite some time. What was your initial reaction when asked to be the 2016 Dave's Picks Artist-in-Residence?

I mean it's truly an honor... when I started out doing posters, it was really for the love of music and because I had seen so many folks actually make a career of it. I really never knew if it would pan out like it has. I thought it would be a good way of making extra money on the side while holding on to a full-time job, but to be able to do this full-time has been a real dream come true. Being able to create artwork for the Dead and represent their legacy has been something that I really never thought would be possible... to me I guess I just really never thought anyone would notice what I was doing. So essentially this is a dream come true to be able to work with one of my all-time favorite bands... and a real honor that they even appreciate my work. To be able to join some of my all-time favorite artists (Mouse, Emek, Griffin, Kelley, Moscoso) in representing the Grateful Dead visually is a real milestone to me and I can only hope that I get to continue doing so.

What is your approach when working on a series of images such as the ones you will be creating for this year's four releases?

Well my number one criteria is to make something that I not only think is worthy of the Dead and their legacy but something that I am proud of as well. Since each release is based around a different show, the time, place and venue of each show go into consideration. Being able to create something that hopefully feels alike a fun representation of that night is what I go for while trying to make the art feel like something that fits well within the Dead's visual history.

What elements of the Dead's original artwork are you attracted to? Will you be incorporating these into your design?

The way I design and create my artwork is directly influenced by the imagery and the process in which Stanley Mouse and Alton Kelley created the 1966 Avalon Ballroom Grateful Dead poster. They took the image of the skeleton and roses from old imagery found in a book of poems called The Rubaiyat of Omar Khayyam. The edition was done by an artist called Edmund Sullivan. They used this imagery and incorporated it into a new composition and basically gave new life to something old in a new and fresh way. This is the way I work. My process incorporates bits and pieces of old imagery created in the late 1800's and early 1900's. I use those to incorporate into my own illustrations and designs sort of a collage/illustration like technique. I think this way of working is a direct influence from the Dead... the way they would take old traditional songs and make them new, giving them new life and playing them in their own way and the way they improvised through the process. The way I design takes lot of improvising and twists and turns... I really never know exactly how its going to come out.

Right now the Dave's Picks series, posters for Phil Lesh and Friends, Willie Nelson, Van Morrison, Widespread Panic, Mike Gordon of Phish, Umphrey's McGee, Wilco, Warren Haynes, and Lotus are all on the schedule. I feel very very grateful to be able to work with so many amazingly talented musicians and hope to keep up the pace that I had going in 2015. I'll be set up at lots of festivals this summer selling my prints and hope to meet lots of new friends out on the road. I also hope to spend lots more quality time with my amazing family... my wife Mary Kate and my kids Annabelle and Ethan, they are why I work so hard and my real reason for living... I feel grateful each day I get to wake up to them.

Greetings JUSTIN HELTON!Enjoyed viewing your original art provided but why are some of the links to: "WORK" only showing the background mat w/out providing the image of the subject?

that page takes a while to load (http://www.statusserigraph.com/work/) but I see all the images eventually. But we don't maintain that site, so better to ask its webmaster if you're still having issues.
Gallery Photo 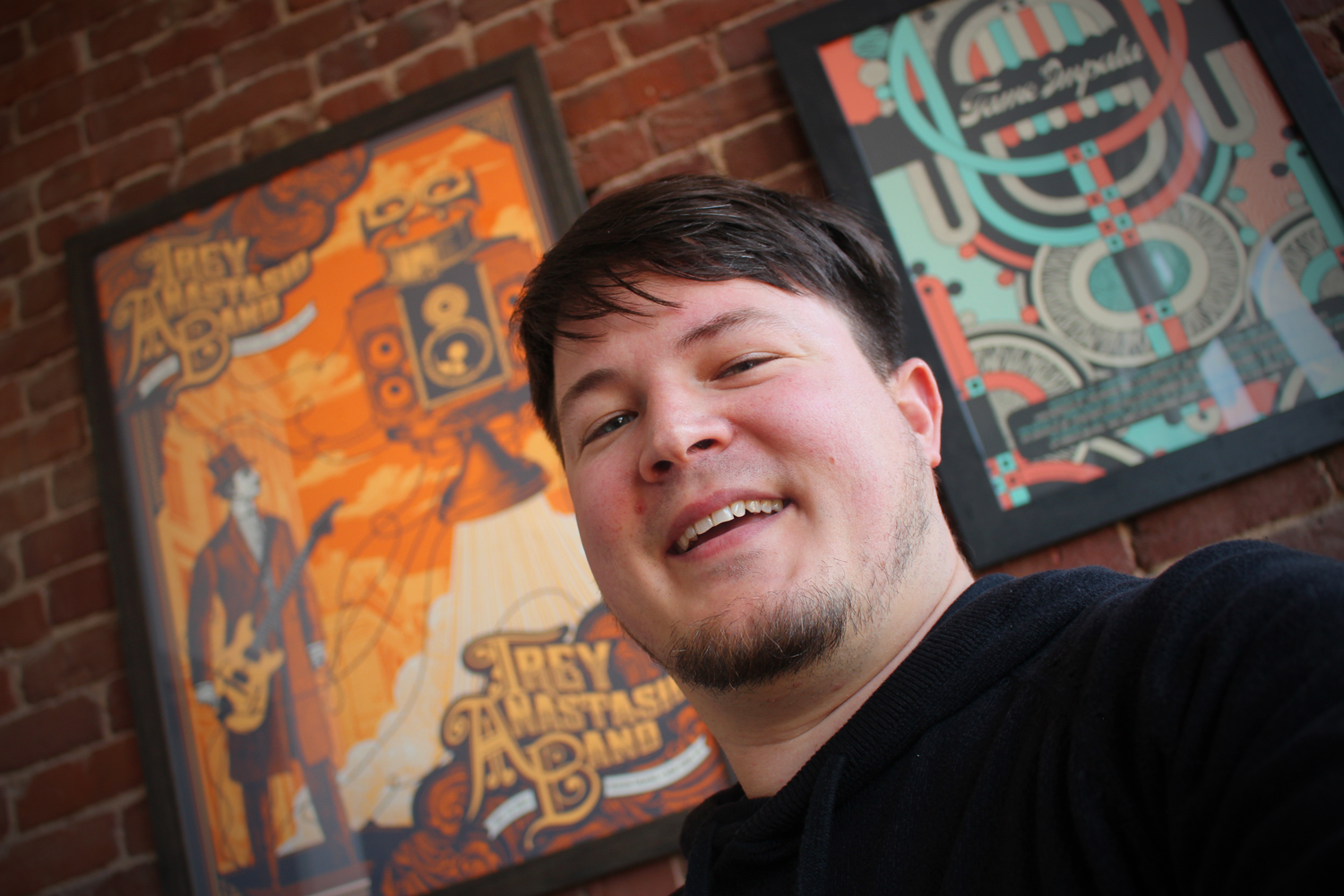 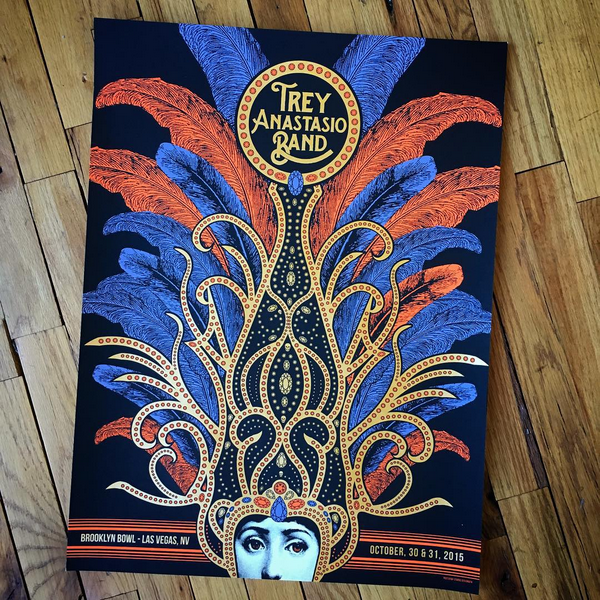 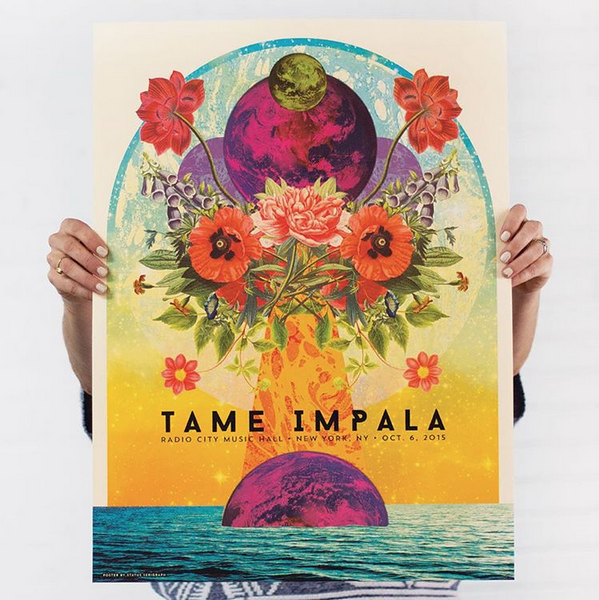 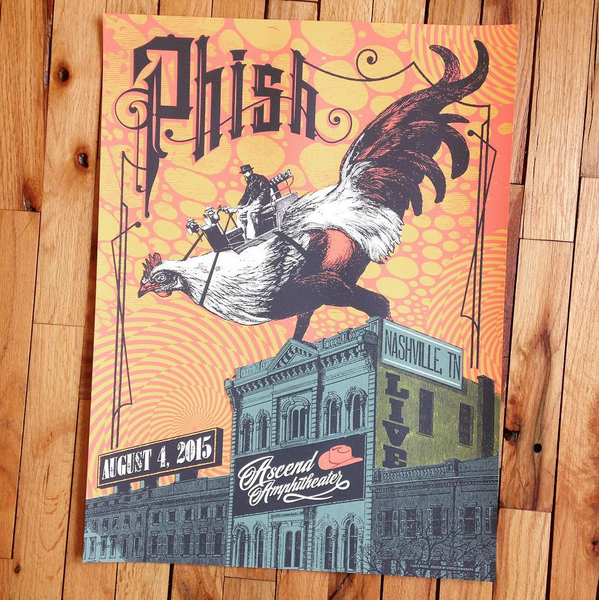 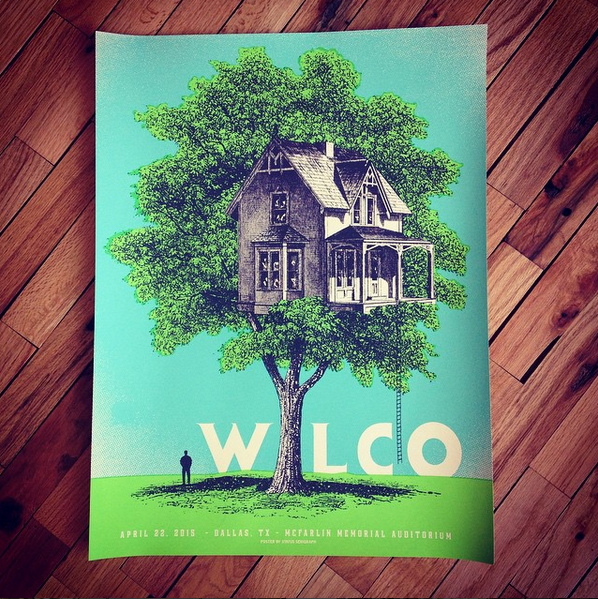 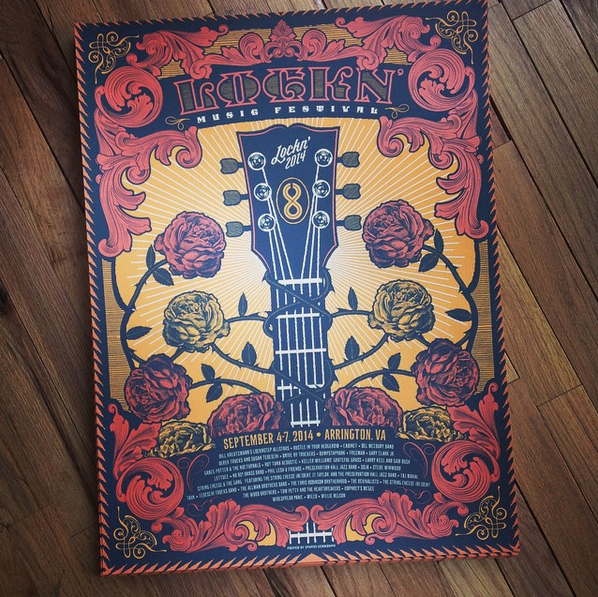 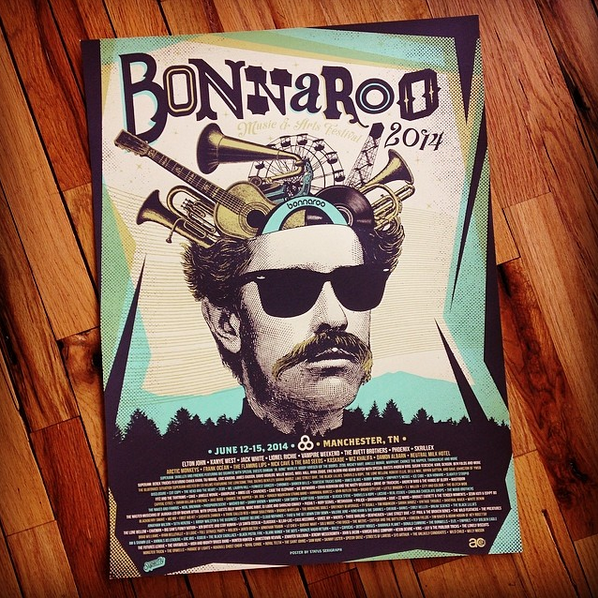 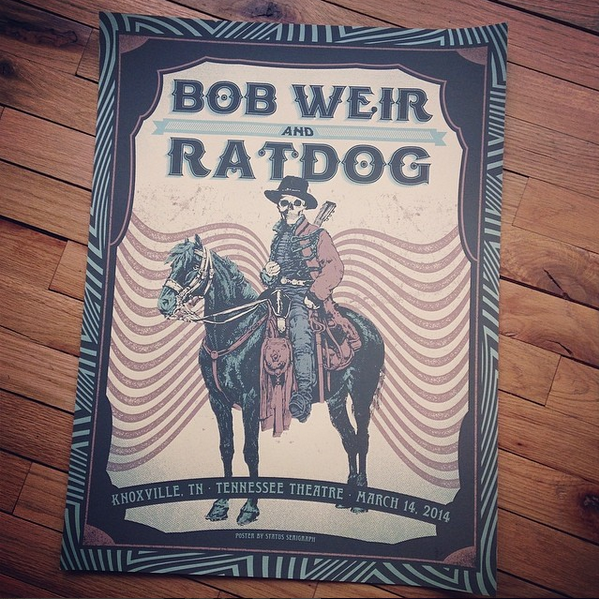 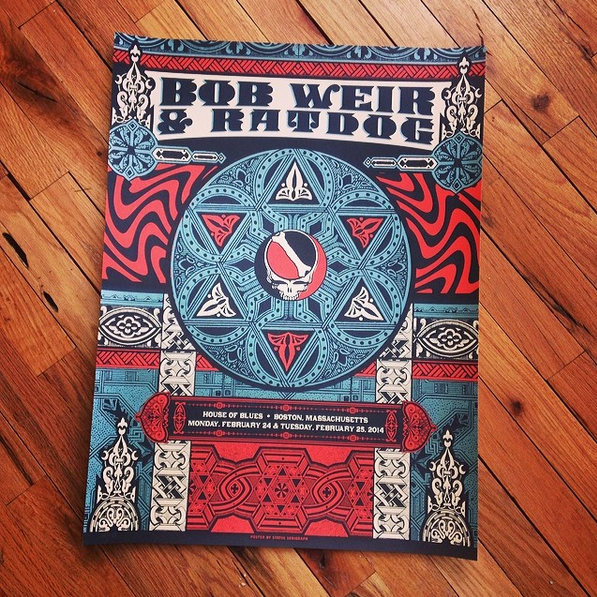 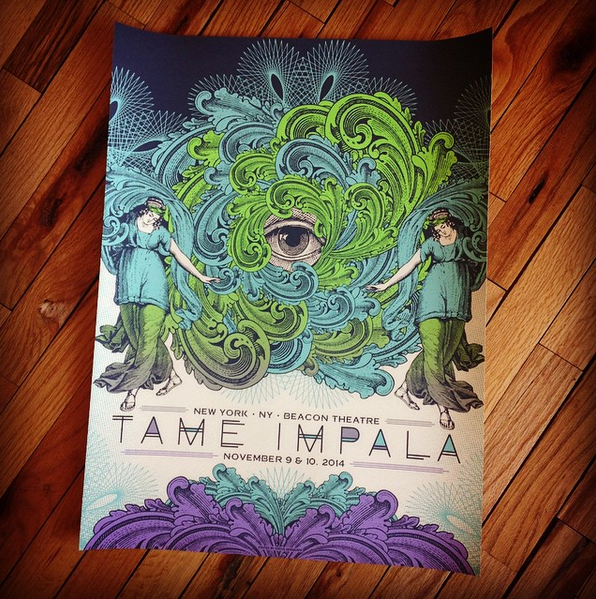 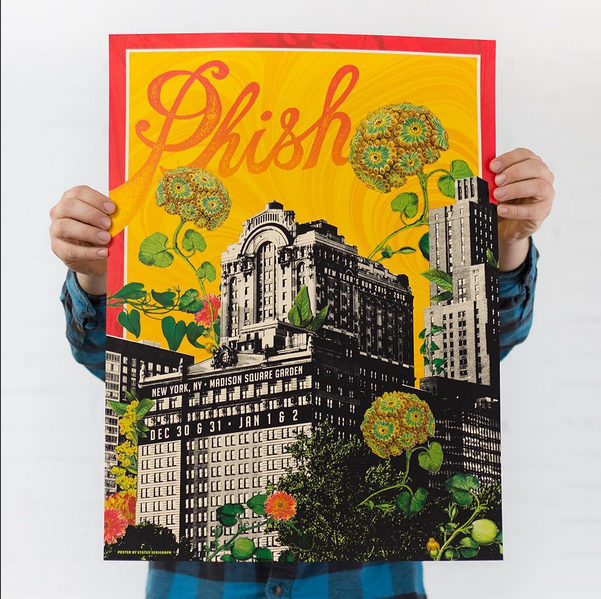 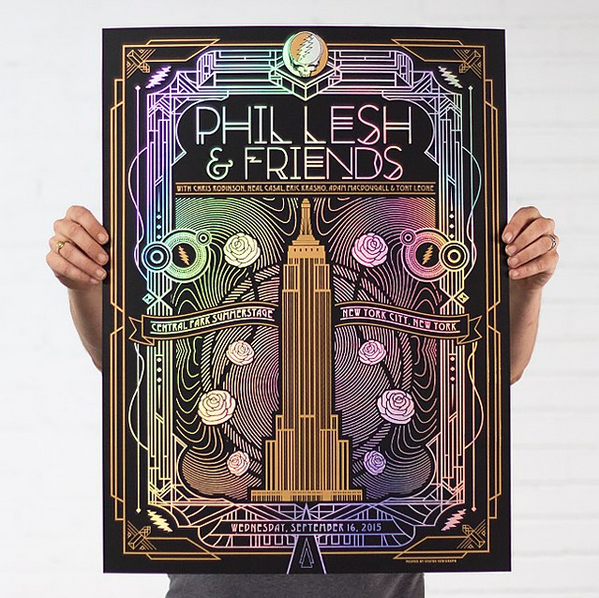 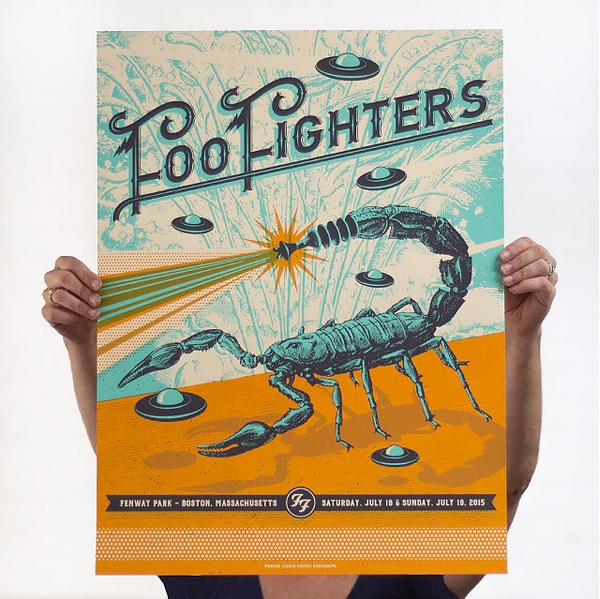 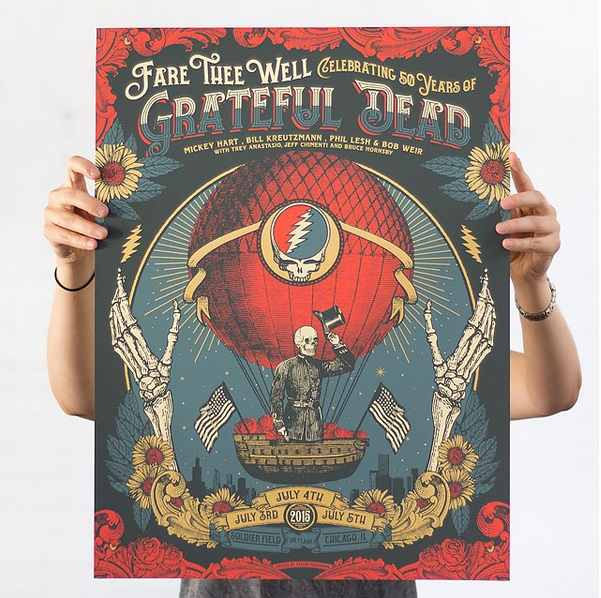 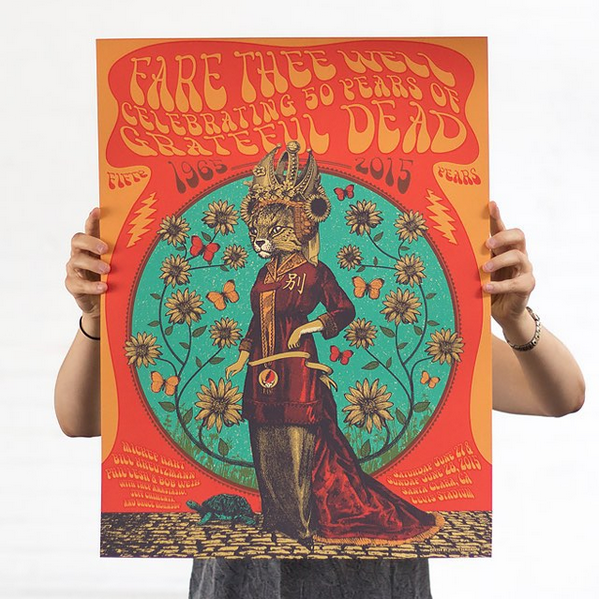 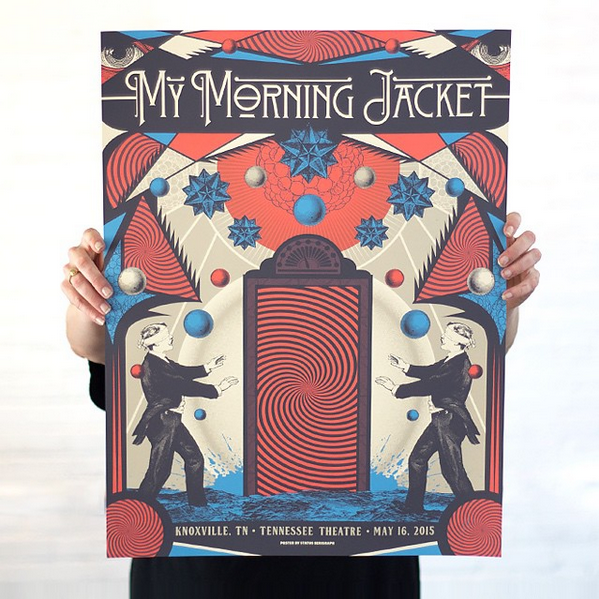 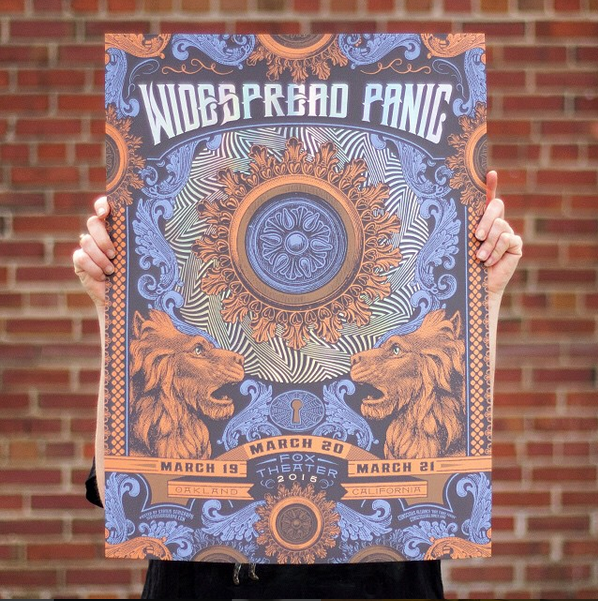