home > features > ALL IN THE FAMILY - MICAH NELSON

A multi-hyphenate and a member of the well-respected Nelson tribe, give us a little background on your upbringing and your earliest exposure to art/music/creativity…

I've been doing creative things for as long as I can remember. I never stopped creating stuff and eventually my creations were paying my rent. It's great! I hope to continue this lifestyle as long as possible. It's amazing that you can actually be rewarded for doing what you love. I don't take it for granted for a second. 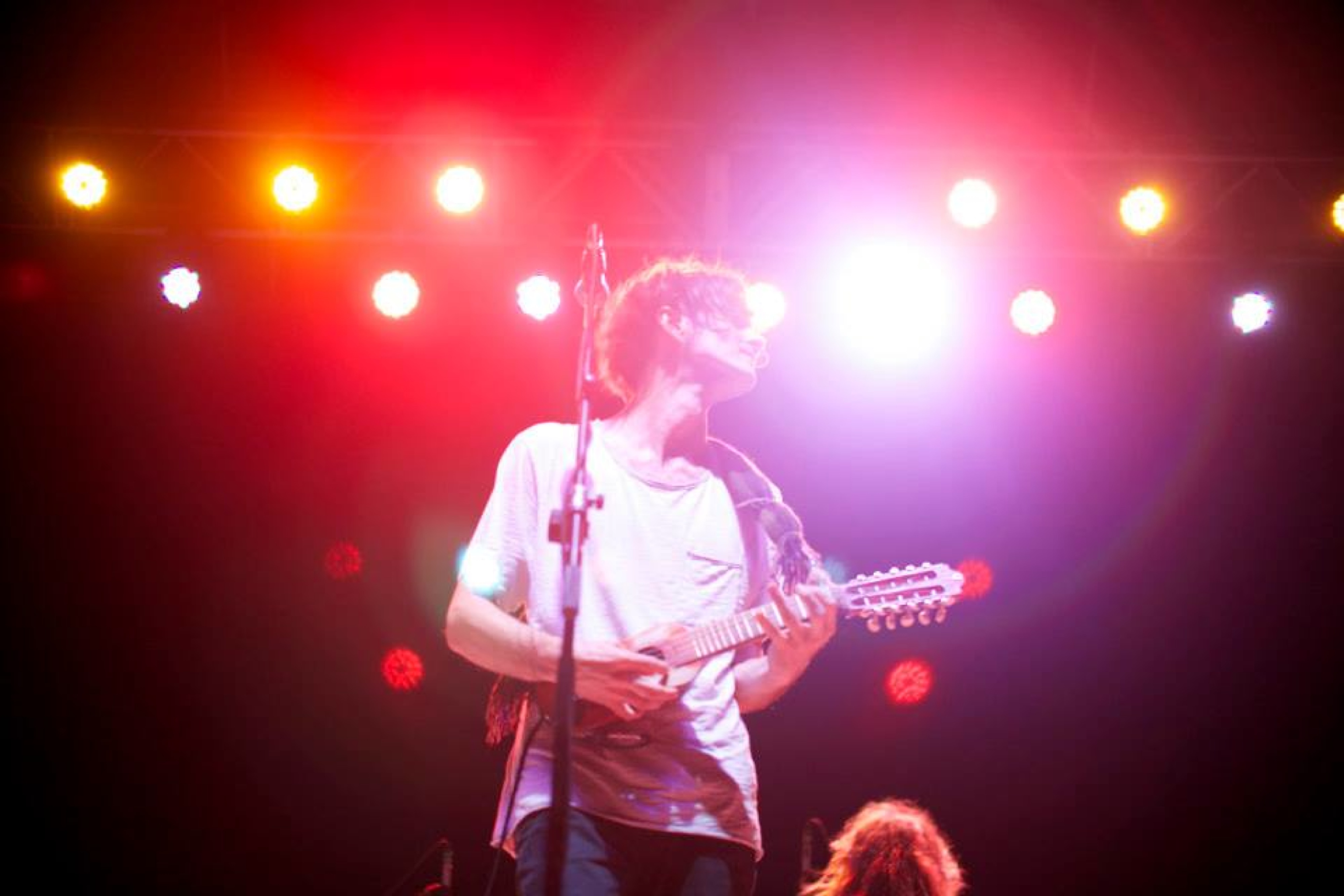 In terms of the visual world, you are an illustrator, a painter — a live painter - and an animator. You're also a part of 3 bands - the psych-punk-orchestra Insects vs. Robots, neo-psych-folk-rock band Pårticle Kid, and POTR, a collaborative project with your brother Lukas Nelson. How do you find the time?

I was very scattered around for a while, experimenting, playing in a million bands, saying yes to everything. Eventually I began to feel thin, like butter scraped over too much bread. The only choice was to focus on the things that really mattered to me and not take on more projects than I could count on one hand. That step was life-changing in a great way, but even now I pretty frequently am up all night working on various things, sleeping at odd hours. That's ok. Life is really all one long day depending on where you are in the multiverse right..?..your birthday!

If you had to pick just one...

Probably The Empire Strikes Back... yeah, definitely. No question.

How do each of these art forms appeal to you? Do you find they work hand-in-hand?

They are very symbiotic. I rarely have an idea for a song without seeing a video or album concept or animation behind it. If I am painting something I usually hear music in my head to accompany it or vice versa. The aural and visual inform each other. I seem to understand music the most in visual, or even tactile terms. It's what makes the most sense to me. I'd love to learn to read and write music better though. I suspect I have a mild case of synesthesia, I'm not sure... maybe not so mild. I am grateful for the life-saving ability to make tangible sense of it all through my art and music. I remember getting very frustrated as a kid when I couldn't express what was in my head, when it wouldn't come out on the page the way I saw it in my mind. I think this whole sanity thing is just an endurance test. If you keep trying it eventually gets easier, or you at least get better at making it seem easier. 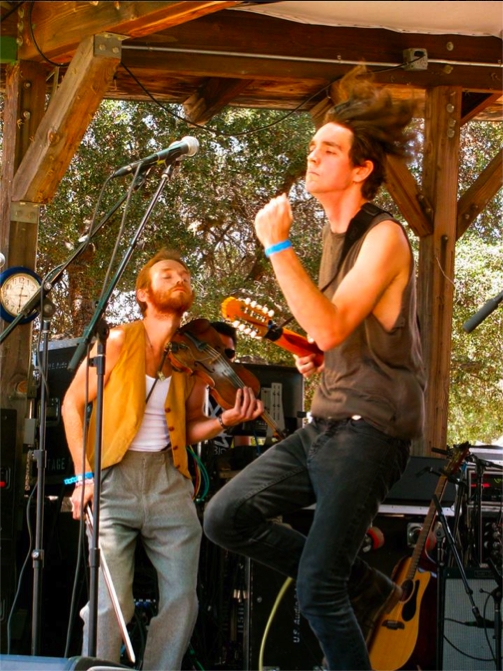 Any formal training in music or art?

Up until I went to art college for a few years, I mostly just either figured things out trial and error style or learned from elder artists or musicians I was lucky to be surrounded with growing up. Nothing really formal. I'm very grateful to have had some fine art education later on though; I gained a lot from the experience. I am a firm believer in knowing the rules well before effectively breaking them. I think it's important to be open to learning new things constantly. I could never learn it all. The more I learn, the more humbled I am by my lack of knowledge. I know nothing.

Is it more challenging to create commissioned works? What makes it interesting?

I guess it really depends on the piece and the work involved. Sometimes having a specific request for something can be easier than pulling something out of the air, y'know, making something from nothing... but really it's all very interesting and inspiring. Depends on how you choose to look at it. I'm so fortunate to even have problems like these. Once, a few years ago, I was asked to carve a liking of a grieving woman's son into a marble headstone... on paper that might sound like a bit of a morbid gig, but it was a profoundly humbling experience and it taught me so much. I had never carved anything into marble before, let alone something as important as the portrait of someone's deceased son, so I knew I had to focus. There's no undo button with marble. I could not fuck this up. I put everything into it and am actually very, very proud of the piece... It has become a shrine for the mother and she still writes to me all the time that seeing it brings her inner peace every day. Thank you for that experience, Mary!

I am a super grateful person to make art and music for a living! That's all I can say at the end of the day.

Let's get into your connection with the Grateful Dead…

When I was 13, I roadied for my uncle Dahr's band 'Titty Bingo' at my father's 4th of July picnic which was in Austin that year. Both Neil Young and Crazy Horse and the Dead headlined that year. I was right there on side stage breathing it all in the whole time. There was no filter, no screen to look through except my own mind. I can still smell the rain approaching. The Dead jammed for what seemed like hours. Mickey had his massive wall of drums. I remember distinctly Phil's warm smile when he shook my hand. All the Heads and hippies and rednecks dancing in the mud. An epic musical journey unfolded that seemed to be laughing at time itself, or maybe laughing with it. The overall vibe somehow felt so familiar, almost nostalgic. Everyone was there, riding it. It definitely influenced me.

How does their iconic imagery appeal to you?

I've always felt that we are just passing through, that we don't own this place or this skin, or anything really. You never see a hearse with a luggage rack, someone once said. I appreciate how the imagery of the Dead often presents a profound reverence and respect for death while simultaneously celebrating life. A light-hearted lesson in the temporality of everything. I dig that.

Given that the Dead do have a very specific aesthetic, what were some of the challenges (and rewards!) of creating the artwork for the 2015 Dave's Picks series?

I love the cultural mythology of the Dead. My artwork tends to be very layered and multidimensional, and often pretty obscure so I appreciate the symbology of the whole Dead legacy. The history is epic and vast, like Lord of the Rings or something. I also like to use muted Earth tones in my work a lot, sometimes coffee or tea stains, etc, but this project demanded bright bold colors, which is something I'm not quite used to. Still, I'm loving the challenge. I like for my comfort zones to be tested and stretched. It keeps it real and fresh.

I am currently making a record with Neil Young and will be collaborating with my friend, the great Gary Burden, on the album art as well! What an honor to call these folks my good friends and be a part of their life stories. We have been having a super great time hanging out and working with Neil - what an inspiring force to be around. I have nothing but respect for Neil. He also happens to be one of the funniest people alive and has basically adopted me and my brother and POTR as his band. What a trip! I've also been writing a new album with Insects vs Robots. We plan to record sometime this spring as well as well as play some shows at SXSW in Austin and possibly some shows opening for the band Tinariwen sometime this summer.If we get time, it would be great to make a music video too - we've got a million ideas and talented superfriends, but haven't quite found the time to make it happen yet. I also plan to tour a bit with my father more this year playing in the family band. We did get to do one show with him a couple weeks ago while he was in town, which was wicked fun. I have been working on several a/v projects with my friend David Wexler aka 'Strangeloop' (Flying Lotus, Erykah Badu) and the whole Teaching Machine crew which I look forward to sharing with everyone. I'd like to find some time to make another Particle Kid record this year too, hopefully finish a record I started last year with Christy Smith and also finish the Lily Meola record that I'm producing. And then take a power nap.

Check out more of Micah's work at jmicahnelson.com.

Check out his band Insects VS Robots here.

I like his art a lot. Looking forward to the remaining covers. I do really like the more earthy tones in his art, which brings me to this quote from the interview: Micah says: "I also like to use muted Earth tones in my work a lot, sometimes coffee or tea stains, etc, but this project demanded bright bold colors, which is something I'm not quite used to." My question is - why? I would be quite happy with covers that looked more like his earlier art... what's wrong with "muted Earth tones"? I prefer 1972 palettes to 1989 palettes :)

Who is Micah Nelson?

It took me a while to make the connection between Micah and his famous father, Willie. Nelson is a common name, so that was a mental block. I really enjoy the artwork of Dave's Picks 13, and until this edition of All In The Family and the link to Micah's site, I find that he is an excellent artist and I am very impressed! Now I can't wait until the artwork for Dave's Picks 14 & the bonus disc is revealed in later April to see if he keeps up the good work.
2 comments
sort by
Recent
Recent Oldest A to Z Z to A
Reset
Items displayed