home > features > All In The Family: Roy Henry Vickers

Esteemed First Nations artist Roy Henry Vickers gives us a glimpse into his illustrious career, the significance of the bent box, and how Woodstock broadened his cultural and musical scope in this edition of All In The Family.

As long as I can remember I’ve always loved to draw. I grew up surrounded by massive totems carved by artists from a previous generation. Our little village of 500 people had an incredible marching band. We had a choir and orchestra that performed Handel’s Messiah at Easter time. Art and music have always been a great part of my life.

In high school my only subject with straight A’s was art. My art teacher taught me to study the art and artists you love. He taught me that every human is unique and if you can learn who you are and create from that place you will do what only you can do.

I encountered discrimination because of my skin color, which sent me on a journey of personal discovery and pride of ancestry. I discovered that discrimination, which we call, racism, exists in ignorance and I should be a teacher. It became my mission to teach the world of the art and beauty in the cultures of the Pacific Northwest. I continue to learn and communicate through my art.

I love the art of Hokusai and Hiroshige and their incredible wood block prints. These two showed me that love of geography and people can be a constant inspiration. The Group of Seven, Emily Carr, have taught me of the powerful inspiration in the natural world. Andy Warhol taught me of the poser of modern thinking and expression. These are a few of the artists that have influenced me over the years. The many unknown artists from the Pacific Northwest have always had an influence on me.

Today my love of nature, the environment, and social interaction with people, are my greatest inspiration.

Let’s get into the animals that appear on and throughout the Pacific Northwest boxed set.

The art and culture of the Pacific Northwest has always included teaching of the natural world, the animals that teach us how to survive in nature. The seasons of the year and what we must do to survive. The stories of the animals have been passed down for thousands of years with no written language. Our ancestors have always leaned by keen observation and experience.

The Eagle, Raven, Wolf, and Orca, are known in stories around the world in this beautiful family of humanity.

The eagle is the lord of the skies with a keen eye. Eagles mate for life and are fiercely protective of their young. The eagle, of course, is the consummate hunter and gatherer of salmon and we are the salmon people.

The raven is the cunning trickster and creator. The raven also is a patient observer of the world and always finds a way to eat. Ravens also mate for life. Our stories tell us that raven brought light to the world.

The wolf has also taught us many things about hunting for food and keeping a strong social order. The wolf is also a teacher of patience and keen observation.

The Orca, is the wolf of the sea and also teaches us of the ocean and the salmon. The orca also has a very tight family structure and the female is the boss. I’ve learned from scientists today that male orca never wander far from the mother through her lifetime.

The Orca and all animals represented in our culture are matriarchal. So it is that we are also a matriarchal people and all knowledge, songs, and stories are passed from mother to children.

Can you tell us a little bit about the technique of shadow images?

My technique of shadow images was learned through the determination to create an image like a thought or spirit that you do not always see. The first learning came by wanting to print an image of a village in the sky that was very faint and disappeared in the distance, like some memories. When we created the image, the part that disappeared seemed to magically appear if you looked at it from a place where the light hit it from a different angle. Color is about light. This has become a way to show a spiritual connection to nature. It is also about respect, taking another look. Often when we take another look from a different perspective we see something we didn’t see the first time. Our Pacific Northwest cultures have always had a great respect for the environment.

This has become a way to get people interested in the culture of the Pacific Northwest. If I can create beauty from the land and infuse it with a cultural element perhaps I can inspire the observer to ask what this is about. When we ask the answer will come.

What is the significance of the bent box?

The Box of Treasures is an allegory alluding to the songs, dances, and art of different families. There is always a special time when the treasure box is opened to share with the world.

There are actually bent boxes that are used to store chiefs regalia as well as valuable masks used in various dances. The boxes were made by taking a cedar plank and cutting a special groove called a kerf, which when steamed will bend the plank in a 90 degree angle. Three corners were bent and the box joined on the fourth corner with yew wood pegs.

These boxes are not Canadian, they existed in the Pacific Northwest before the USA or Canada existed. The Pacific north west is in the USA and Canada today.

Much like your work, the Grateful Dead have a rich iconography. What elements do you consider important to creating a signature style? What parallels can be made with your art work and the Dead’s?

The elements that form a signature style are those that the artist chooses that are unique and speak to humanity. My interpretation of the skull of the Grateful Dead represents our connection to those who have passed before us. The style of art that exists in all I do comes from the ancestors.

Music is the most powerful art form and the Grateful Dead have communicated to millions for many decades through their music and chosen iconography. Their longevity is a testament to their unique expression and willingness to move and communicate from inspiration.

It is said that the thunder and lightning from the thunderbird announces the time to bring the people together to sing and dance the stories of the ancestors.

Lightning struck and the treasure box was revealed. A way to celebrate the Dead and the cultures of the Pacific northwest. This is the greatest moment of teaching in my 44 year career.

The art and music of the Grateful Dead parallels the cultures of the Pacific northwest. We are family and it’s our similarities that bring us together.

Tomorrow is a mystery for me. There are plans for a few more books on the journey of teacher, healer, visionary, and, warrior.

My first exposure to the Grateful Dead was the movie, Woodstock. There was a lot of great music there and it was during my time of learning of my culture and good music from around the world.

The GD remained on my radar but I never got to see them perform and never listen to live music much unless it’s from something that I attended.

Then along came Dylan & The Dead in 1989. I went commercial fishing for the summer of 1990 and listened to their music all summer.

My favourite Dead songs are too numerous to mention but would say the entire album of Dylan & The Dead, "El Paso," "Mama Tried," and I like that instrumental album by Circles Around The Sun.

My favourite Dead years would be from 79 to 89.

Being a Dead Head means being courageous, spontaneous, passionate and always open to inspiration.

What a great story. Inspirational, educational and a new First Nation addition to the GD iconography.
Gallery Photo 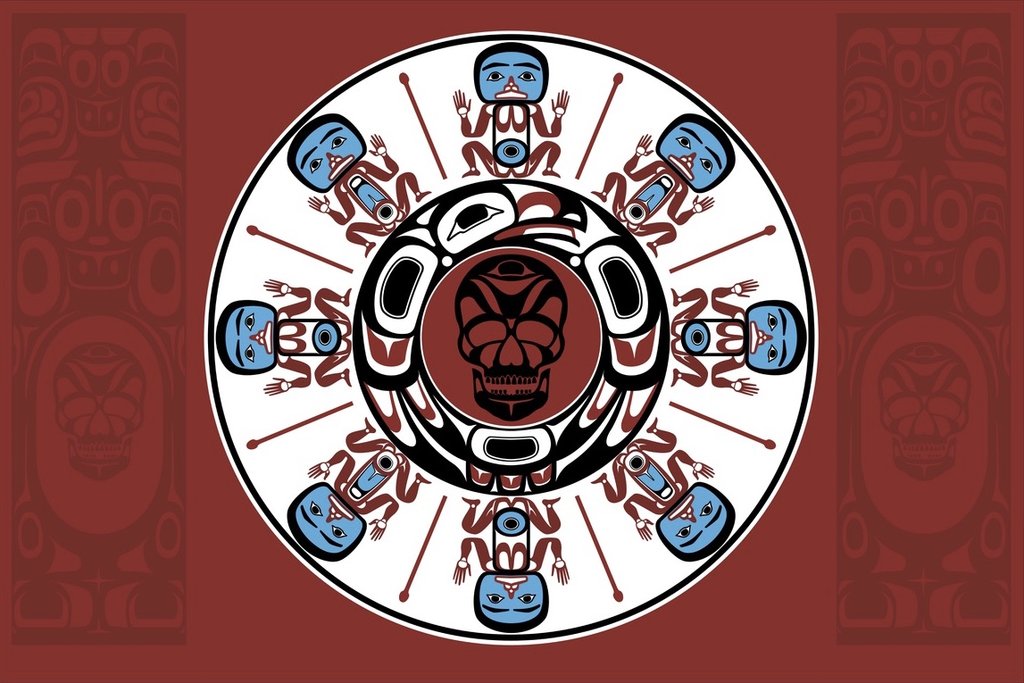 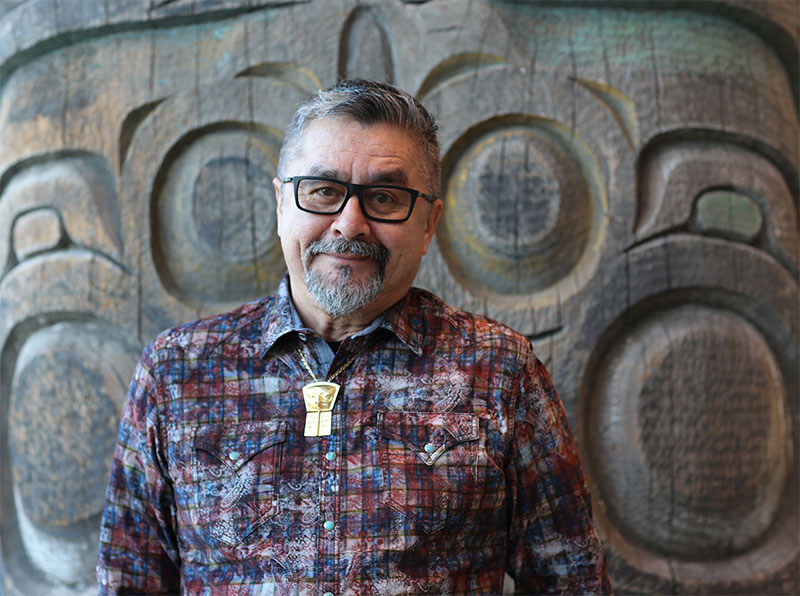 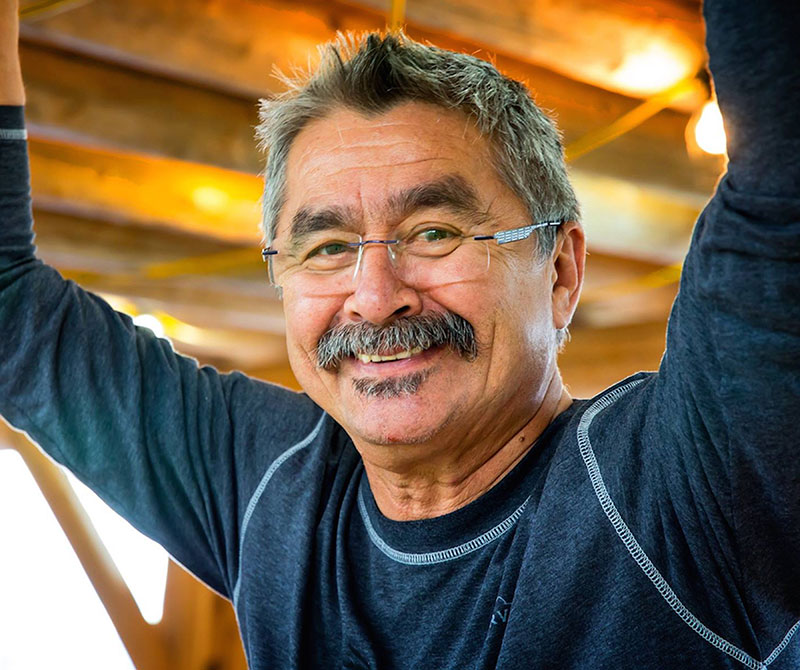