home > features > Out Now: Dennis McNally's On Highway 61: Music, Race, and the Evolution of Cultural Freedom 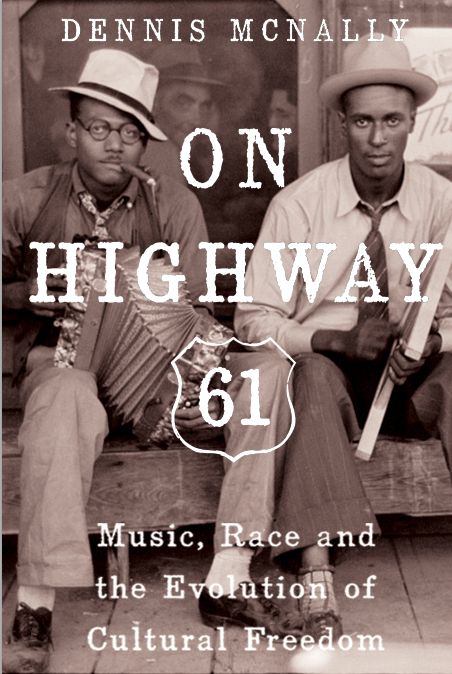 "On Highway 61 is America's most iconic stretch of asphalt, a vital artery of blues, stories and dreamers. Dennis McNally charts that sacred ground from Congo Square to the Canadian border, riding shotgun with Mark Twain, Robert Johnson and Bob Dylan in this gripping, new history of race, revolutionary expression and a nation busy being born at every mile." -- David Fricke, Rolling Stone

Dennis McNally's got a new book - On Highway 61: Music, Race, and the Evolution of Cultural Freedom out that explores the historical context of the significant social dissent that was central to the cultural genesis of the sixties. Grab a copy here and check out the author's statement below.

I began On Highway 61/Race, Music, and the Evolution of Cultural Freedom as an effort to seek the deeper roots of why the 1960s happened – why so many people asked so many profound and challenging questions about American beliefs. The war in Vietnam, LSD, the birth control pill, folk and rock music – all of them were important immediate causes. But I wanted to go much deeper.

After a whole lot of research, I found myself tracing the relationship between white, mostly young, Americans and African American music, and how that connection always seemed to pursue what I took to calling the freedom principle.

As I went along, the story touched on Thoreau, Mark Twain, the minstrel era, the Fisk Jubilee Singers, the origins of ragtime, the blues, and jazz. And that was only the 19th century! Charlie Patton, Louis Armstrong, the Austin High Gang (the first young white jazz players), Swing, Lead Belly, John Hammond and “Spirituals to Swing,” Bop, Rhythm & Blues, the electric Chicago Blues of Muddy Waters and Howlin’ Wolf, and the folk music of Woody Guthrie and Pete Seeger.

And for me, it all came together in the story of Bob Dylan, whose music had at least as many black sources as white, and who returned to the black-white fusion that is rock ‘n’ roll as his career matured, and whose songs, whether overtly political or more personal and even surreal, always concerned freedom.

I am really loving this book

here is a nice review i read the other day in no depression... http://www.nodepression.com/article/dennis-mcnally-revisits-highway-61-…

I read Desolate Angel Dennis's first book when it came out in 1980. One of the better Kerouac biographies. I also loved his biography about the Grateful Dead. I look forward to reading Highway 61.

this is good news...

...I've been waiting for another book from him. I hope he decides to do some readings/signings as well. Dennis, if you're reading this, please come to Syracuse!

Oh c'mon not another book

Oh c'mon not another book about the sixties, why not pick an era like 1982 or 1983? Here's hoping his next book is coming soon to address these neglected years. Selah.

As someone who teaches

As someone who teaches 19th-20th century American history and uses a lot of music in class, this book looks great. Ranging from Thoreau to Dylan, McNally has certainly done his research. It's not a book about the Sixties, but as the subtitle states, a study of music, race, and cultural freedom. This book is not about the Dead, but rather, where they came from.
7 comments
sort by
Recent
Recent Oldest A to Z Z to A
Reset
Items displayed