One recently processed collection in the Grateful Dead Archive is the Michael Linah Papers, a small but evocative archive documenting Linah’s much-loved parking lot flyer and sticker series, both named Mikel. Donated by two of Linah’s longtime friends and colleagues, the collection consists of the flyers and stickers as well as correspondence, production materials, and a wide range of ephemera used to create Mikel.

Linah (1943–1985) attended MIT as an undergraduate, but his real passions were the Grateful Dead and bridge. In 1975, he became Associate National Director of the American Contract Bridge League, a position that required him to travel across the country to oversee tournaments—and allowed him to see shows. In 1982, he published the first issue of Mikel, a folded, letter-sized photocopied newsletter that contained set lists, artwork, letters from fans, and general information on the band. Linah gave out copies at shows and to those who mailed in a self-addressed, stamped envelope. With the help of several artist friends, he also created and printed custom-made stickers for concerts in 1983, 1984, and for the spring and summer of 1985. Both efforts attracted the admiration of fans all over the country and abroad: many Deadheads collected his stickers, and his newsletter served as an early conduit for fan-disseminated information in the era before the Internet. 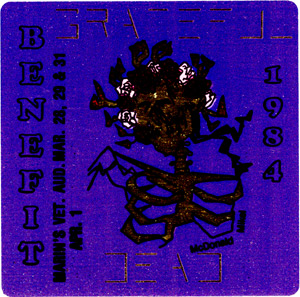 As a collection, the Linah Papers provide a number of insights, but its greatest contribution is as a snapshot of the Dead phenomenon just before the tsunami caused by “Touch of Grey” swept through the scene. The collection is very much an expression of Deadhead culture and the Grateful Dead phenomenon, not just intrinsically—in terms of its research potential—but as a reflection of its ideals: the newsletter and stickers were given away; the art and clippings and letters and set lists and stories made it a community effort. Mikel was more than just one fan’s contribution to the scene: it was a reflection of and vehicle for the expression of the Deadhead experience. 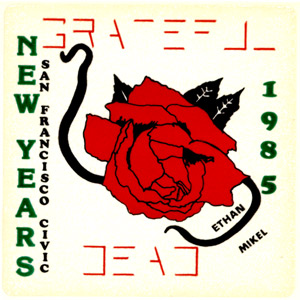 The collection also offers a compelling and useful corrective to the growing consensus dismissing, or diminishing, the early to mid-1980s in Grateful Dead history. Pundits, critics, and some fans find it easy to focus on Garcia’s health and its audible impact on some shows during that era, but the broader significance of the band’s work then as a powerful, vital and uncompromised voice from the sixties gave the lie to the mainstream, Reagan Eighties’ depiction of the Haight-Ashbury, the counterculture, and the sixties. Linah’s archive, and his work, demonstrates how the Dead scene remained a beacon during those years, one that not only attracted bright, generous people like Linah, but also encouraged that kind of effort. 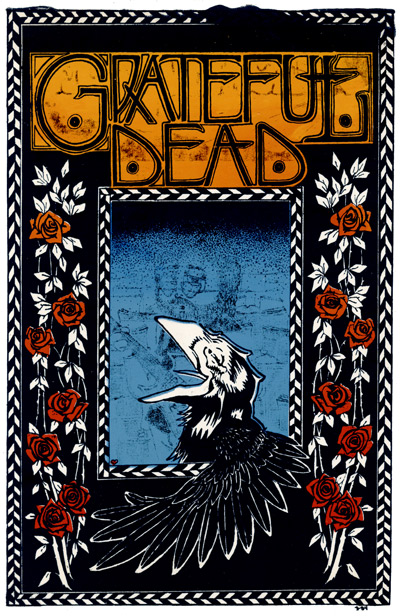 That effort was substantial. One major aspect of the collection is its documentation of the work required to create a flyer before desktop publishing. The range of materials Linah collected and amassed is impressive, as is the caliber of the art. Deadheads sent Linah wonderful drawings, sketches, and paintings; stories, set lists, and newspaper clippings; and dozens of stickers and other pieces of parking lot ephemera, from fan-made posters to puzzles to cartoons. Linah had a network of close friends and trusted correspondents on whom he could depend for art and insights as well as up-to-date information, cutting-edge rumors, and other news. Several of his confidants hailed from Europe, giving Mikel a cosmopolitan edge that belied the tenor of its photocopied aesthetic. 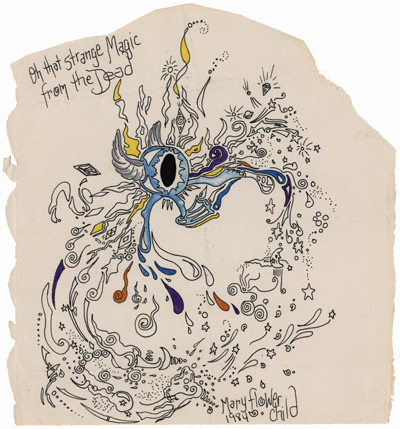 The collection also shows a significant side of the Deadhead experience: how fans took the band’s example to heart, and helped create a scene outside of the venues that reflected the ideals and values they heard expressed inside. Reporters, especially before the inundation of the scene in the late 1980s, always commented on how many things fans gave away in parking lots, from apples to stickers to flyers to hugs. That ethos echoed the old Haight-Ashbury idea that giving a stranger something was an artistic act, if one with a hint of subversiveness—or more than a hint, as Haight activists the Diggers believed. Linah exemplified that belief, and modeled that tradition. He spent a great deal of time and money on his gifts to the scene. 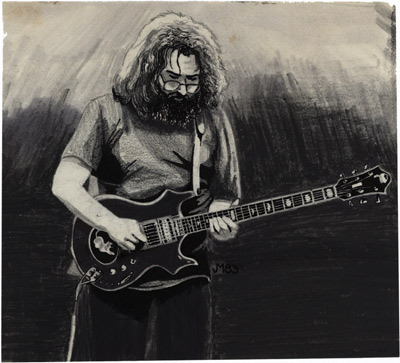 Linah’s archive also shows how integral even humble parking lot efforts like Mikel were to the broader phenomenon: fans didn’t just send Linah self-addressed stamped envelopes, they sent in beautifully decorated envelopes—even though Mikel was a free flyer, not a mail-order ticket, and even though the decoration wasn’t necessary to secure a response. What the artistry of those envelopes shows is how much Linah’s efforts were appreciated, and how highly his give-it-away attitude was esteemed—and shared. Mikel was more than just a link between fans; with their support, Deadheads connected efforts like Mikel to the Dead themselves.

Linah corresponded with most of the other Deadhead fanizines, from major efforts such as Relix, Golden Road and Dupree’s Diamond News to fellow ‘zines like Over the Border. Deadheads In Europe and Spiral Light were particularly supportive correspondents. The letters in the collection capture a slice of Deadhead history that is otherwise not easily isolated. Another category of materials in the Linah Papers is set lists, some carefully written, some printed, some just sketched. Perhaps the most evocative one is incomplete, a first set with the first song of the second, written on the back of a US Senate envelope, labeled “Public Document,” and “Official Business.” We can only speculate that a busy Capitol schedule meant that whatever Senate staffer penned this had to leave the show early, much to his or her chagrin.

Linah died from complications related to cancer on October 17, 1985 in Covina, California. He was eulogized in the New York Times bridge column, and the praise from his peers makes it clear that his Deadhead ideals infused his career. He was lauded for his professionalism, efficiency, and encyclopedic knowledge of the laws of bridge, but what is most striking is their admiration for his kindness and amiability in delivering rulings, which made him a beloved figure on the national circuit. When he died, the outpouring from the bridge world was striking, but the affection and grief from Deadheads was even more remarkable.

The most palpable proof of that was the continuation of his work by his friends, who continued to publish the newsletter as St. Mikel for another two years, and produced a commemorative sticker honoring Linah that was given out at shows in late 1985 and 1986. Those memorials are more than just a wonderful postscript to the story of a Deadhead whose life was cut short far too soon: They also link Linah and his archive to the underlying ideals of the folk motif that gave the band its name—to honor the past with no thought of reward, which is itself a reward. With this collection, Linah’s friends honored him, just as he honored the scene that he loved and chronicled, in what many fans consider its last halcyon era.

All images from the Michael Linah Papers, Grateful Dead Archive, UC Santa Cruz. A special note of thanks to University of Denver library science master’s student Jamie Taylor: Her internship at the Archive this June processing the collection made this dense and challenging archive accessible for scholars and researchers.

I still have a bunch of old unused Mikel stickers plus ticket stubs from New Years shows and otherwise. Wish I still had my old Fillmore East, Capitol Theater 70-71, or any of the 70 tickets stubs for that matter. Have phun these two weekends on deck, kids and elders alike.

I fondly remember Mikel stickers and newsletters. Back in the days before the 'net, it was a cool way to keep in touch. I passed out Mikel stickers in Kansas City and Cedar Rapids '84. It was amazing all the people who were so happy to get a sticker in the lot before the show...

In the early 1980s, there was no Internet, and there wasn't Star Trek anymore, either, so we couldn't even dream of it. If you were the kind of Deadhead who was very very interested in what the Dead may have played last Summer in Kansas City--I was that kind of Deadhead--then Mikel was gold. In 1982, I think at the Greek Theatre, I got a sort of laminated 8 1/2 by 11 color photo of the band, for a dollar. On the back, in unbelievably tiny print, was a detailed and accurate setlist from every single show of the prior year. I don't know how Mikel did it, given the limited technology of the time. Up until Deadbase came out in 1987 (six years later), it was the only source I had. As recently as this year, it was pinned to my cubicle at work, and people from all over the world would come by and say "what is that, and how was it done?" I can tell them what it is, but I have no idea how it was done.

Having been on the receiving end of so much good energy from Mikel and, later, St. Mikel, I've waited 30 years to be introduced, and to learn his fate. Sad he couldn't be around for this last go-round, if that's how things turn out. I've often wondered about him, and kept my Mikels stowed with other stuff. Thanks for the update.

I so remember the Mikel

I so remember the Mikel stuff. It was like a gift from the Gods. Entire years worth of set lists on a single page with all the comments the band members made during the show. It was fabulous. Little pictures of stuff each show had going on. I'd run through the parking lot to get that nights sticker at every show. And then there were none. He up and died. We all were so sad one of the best of us had gone on. We never knew who Mikel was but we loved him so. I never knew what the band was playing after his passing until I had enough money to buy the Dead Base book. It was a huge expense for info that I used to get for free. With Mikel I could predict set openers and closers and encores. It was like I was a seer! Thank You Mikel!
5 comments
sort by
Recent
Recent Oldest A to Z Z to A
Reset
Items displayed