This week’s entry focuses on a small but significant supporting collection in the Grateful Dead Archive, the Robert M. Petersen Papers. Although the collection comprises only two boxes, it is the most literary collection in the Archive, with manuscript and typescript poems, lyrics, essays, short stories, letters, and chapbook paste-ups. Substantially compiled by band family member and longtime Ice Nine Publishing manager Alan Trist, who assembled and edited the posthumous anthology Alleys of the Heart: The Collected Poems of Robert M. Petersen, the Petersen Papers chronicle his artistic development through his final achievement, from his early poetics, forged in prison, to the lyrics he wrote for the Grateful Dead, to his mature poetry, with its powerful evocations of nature and humanity in California, Mexico, and the Pacific Northwest. 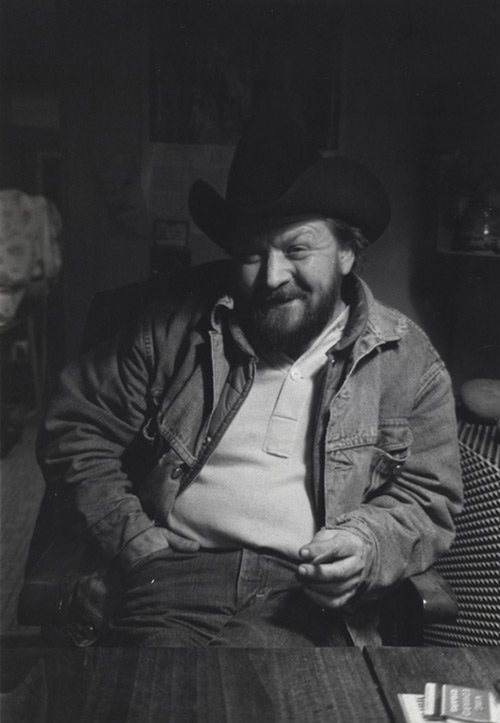 Petersen was part of the artistic community from which the Grateful Dead emerged. His friendship with Phil Lesh, formed when they were both students at the College of San Mateo, had a major impact on Lesh, who credited Petersen with providing him with a real bohemian education. “He turned me on—taught me everything I knew, practically,” Lesh said in a 1981 interview. “Petersen had lived … Through his experience and native ability, he was into writing, into literature. He turned me on so much you can’t encompass it.” With Petersen as a guide, Lesh delved more deeply into the Beats and learned about Black Mountain poets like Charles Olson as well as older writers like Henry Miller. Petersen’s deep knowledge of jazz connected the two friends even more deeply, although he was leaving his cornet and saxophone behind even as Lesh was progressing rapidly with the CSM dance band, renowned as one of the best in the Bay Area. Most of all, Petersen impressed Lesh with his attitude of “living in the moment, of expanding the ‘now’ into an eternal present,” as Lesh recalled. In the years to come, both men would find inspiration for their craft in that ever unfolding and enveloping moment.

Petersen wrote a number of lyrics for the Dead, four of which the band worked up into songs. Those songs encompass almost the entirety of the band’s career: “New Potato Caboose,” written and recorded for Anthem of the Sun, captures the ambitious experimentalism of their work in the 1960s; “Pride of Cucamonga,” written in 1972 and recorded for Mars Hotel, fits with their turn to Americana of the early 1970s; and “Revolutionary Hamstrung Blues,” performed only once in 1986, traces the world-weary mood of an old Wobbly adrift in the Reagan Eighties. “Unbroken Chain,” also recorded for Mars Hotel, is the one that stands apart, timeless and universal, one of their signature songs that captures the heart of their approach to music. It is a deep and haunting meditation that for many Deadheads represents one of the band’s seminal expressions, poetically and philosophically. No wonder it inspired some of Lesh’s best music. 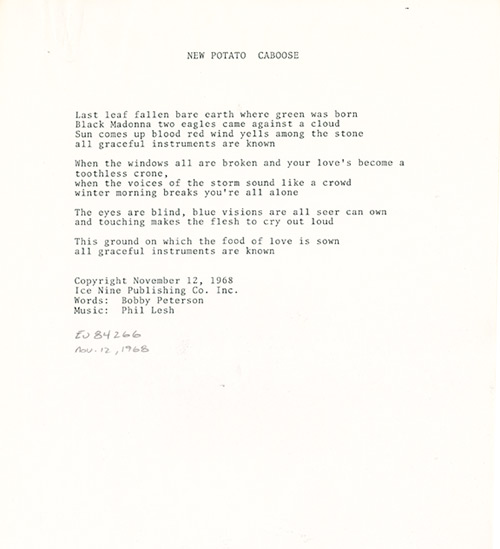 If all Petersen had accomplished were those lyrics, he would stand as an interesting minor figure in the Dead’s world, but his work—and especially his papers—show so much more. The lyrics are a part of his oeuvre: they not only encapsulate many of Petersen’s themes and referents, they are touchstones for the deeper currents in his life’s work. Ultimately, Petersen’s poetry—and life—trace another arc of the counterculture, one deeply connected to the example of his heroes Lew Welch and Neal Cassady.

Petersen’s influences went far deeper than his Beat friends and forebears. His small library had T. S. Eliot’s collected poems and Herman Melville’s novels, along with works on Native Americans, folklore, and history; everything that the dense allusions that wind through the poetry suggest. One of his most interesting prose pieces, an untitled essay that he worked and reworked but never completed, explored the connections between the scenes he experienced with those of the Beats and their antecedents, making explicit the connections that Lesh, Garcia, Hunter, Trist, and their friends all intuited and felt. The phrase in the essay that stands out as a potential title is “permanent renaissance.” It was an idea that went to the heart of the community that supported and informed the emerging Grateful Dead. 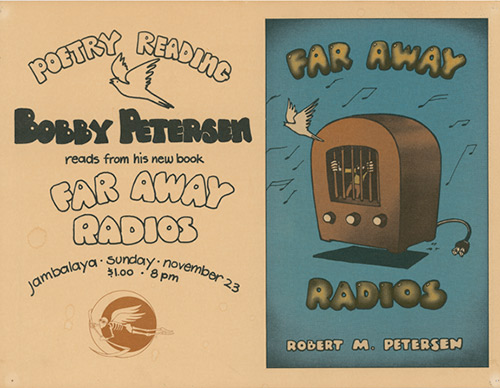 Among archivists, there has been a growing awareness in recent years of the complex and intertwined relationship between communities and archives. Indeed, archives by their very nature can often be viewed as an integral expression of the idea of community, and Petersen’s papers evoke that complex web of relationships, helping us understand how the idea of community informs the Dead phenomenon. Many participants and writers have observed how deeply ingrained the notion of community was in the Grateful Dead. Community was a hallmark of the scene: not just the idea or the practice but the ideal—how the concept manifested itself throughout the phenomenon, from the band’s inner circle to the fringes of the scene. Petersen’s papers illustrate what that means, not only for the Dead but more broadly, helping us to connect that to the larger contexts that inform his life and work: the literary dimensions of the counterculture to the transition from the Beats to the hippies. In turn, these help us to see how the idea of community informs both the subject of the archive, and the archive itself—for how it was collected and curated are expressions of community, and required community to accomplish and acquit. 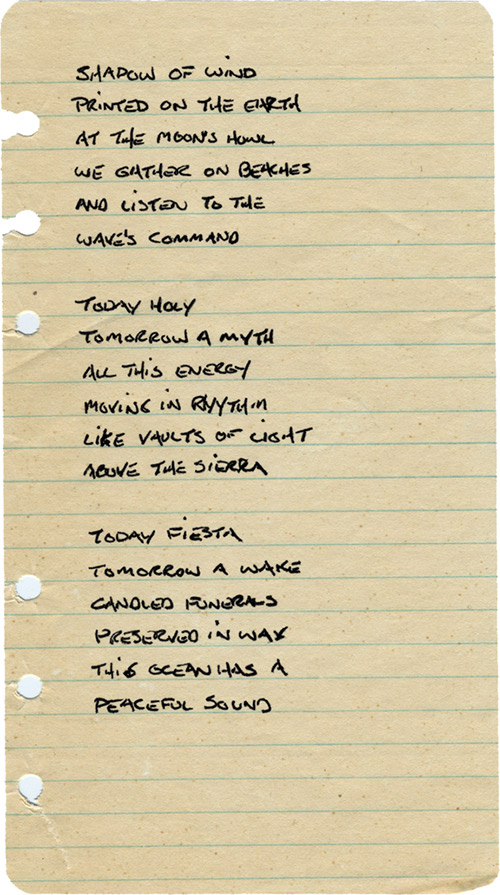 Phil Lesh once wrote that “it may no longer be possible for the solitary artist to make an impact on his world unaided.” The danger with archives is how they can skew perceptions: a researcher looking through box after box of neatly arranged material may lose sight of the fact that the collection she’s perusing was painstakingly assembled by a friend of the author, then curated by an archivist who interviewed a dozen of the author’s friends in order to understand the collection, and how it fits together. The bigger lesson is that the Dead scene was a community, and the Archive needs to reflect that. We will never know exactly what we lost when Paul Speegle was killed in the car crash that Garcia always credited as one of the major events of his young life; we have no archive to document Speegle’s life and the precocious work that inspired Garcia, Hunter, Alan Trist, and so many others in the early peninsula bohemian scene. Thanks to Alan Trist and others, we do have an archive for Petersen, though, and with it, his accomplishment takes on a greater cast: not just that of a determined poet, whose stubborn pursuit of his muse never faltered throughout a difficult life, but a literary artist who successfully navigated the difficult divide between poem and lyric. 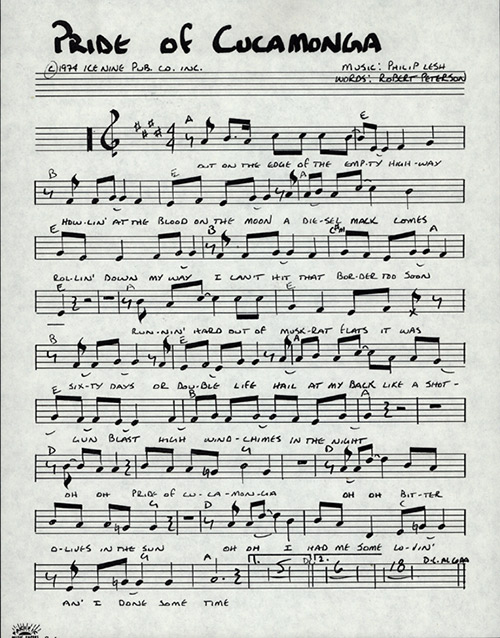 In his memoir, Lesh wrote that “I saw Bobby as a true artist, following an artistic and spiritual quest …” Petersen’s friends saw that even in his last years, when the toll of hard living had begun to diminish him, physically if not creatively. In an early unpublished draft of his “Forward” (his spelling) to what would become Alleys of the Heart, Robert Hunter called Petersen “a street poet, first, last and foremost, who recorded what he saw in lucid verse which is his living memorial. He played a dangerous game with life and left some damned fine work behind.” The Petersen collection is eloquent proof of that assessment. 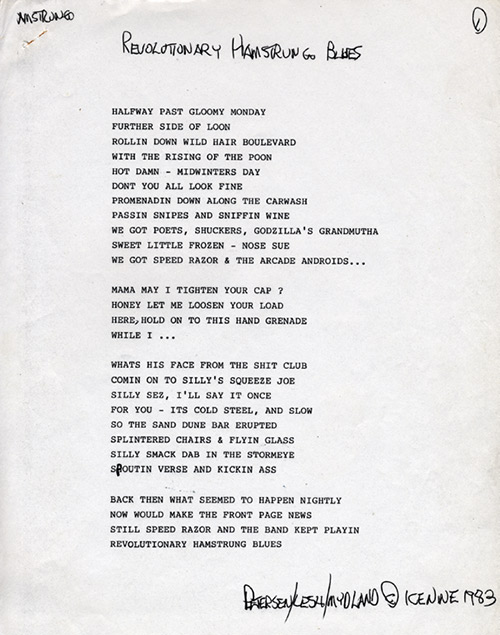 A Lyricist For Every Songwriter

In the sixties, at least, it wasn't that uncommon for rock bands to have a poet friend who wrote lyrics for them. Pete Brown wrote lyrics for Cream, Keith Reid wrote lyrics for Procol Harum and so on. However, the Grateful Dead were the only band that had a lyricist for every songwriter: Hunter for Garcia, Barlow for Weir, Bobby Petersen for Lesh. Just another way in which the Dead were separate from the peers.

It was 40 years ago this month that I first read "On The Road" while hitch hiking from Missoula to Yellowstone to go backpacking for a week. Little did I know the huge impact that Kerouac would have on my life. The indirect connection with the Grateful Dead would become apparent in later years. As Anthem of the Sun was the first Dead album I listened to soon after it's release in 1968 I have a warm feeling about New Potato Caboose. The lyrics are some of the most evocative from the greater body of songs from the band. I feel fortunate to have met Bobby Petersen on a couple occasions. Our conversations revolved mainly around Taos where he had lived and where I was residing at the time. Similar to the times I met Laird Grant the conversations centered around the topics of Taos, New Mexico, old Mexico, American Indians, Beat writers, Neal Cassady, Peyote. It seemed wise not to belabor them with talk about the Dead. In February 86 I brought my friend, Japanese beat poet Nanao Sakaki to see the Dead at the Kaiser. I made a point of introducing Nanao to Bobby. Nanao signed a copy of his book Real Play for him. The following January (1987) I'm driving with friends from Santa Fe up to Taos to see a dance at Taos Pueblo. On the drive we had been listening to a bootleg GD tape from the Shrine Auditorium. We arrive at the Taos post office and I stop the tape right before New Potato Caboose begins. So I go in the post office to pick up my mail and find a letter from my old Missoula buddy Jim Lynch who had been living in Berkeley at the time . In the letter was a clipping from the San Francisco Chronicle. It was the obituary for Robert Petersen. So after the buffalo dance while driving back to Santa Fe once we cleared south from Ranchos de Taos and out on the open road I reinserted the Shrine cassette and picked up where we left off, New Potato Caboose. When my brother Rick died at his home in Glen Ellen Ca. five years ago I knew I had to read a specific poem at his memorial a few days later. It was from Ring of Bone by Lew Welch, The Song That Mount Tamalpais Sings. As it was my brother who turned me on to the Grateful Dead by way of Anthem 47 years ago and he was the first in my immediate family to move west I felt Lew Welch's words to ring true. So there is indeed a strong connection of Kerouac, Kesey, Gary Snyder, Lew Welch, Nanao, Taos, American Indians, Peyote, old Mexico, the desert, the mountains,Neal Cassady, Oregon and Bobby Petersen and the Grateful Dead. "Wind yells amongst the stones, all graceful instruments are known". Signed, another damned Yankee in Chief Bromden's lodge

Thank you so much for putting this page up...I'm sure Bobby (RIP) and Jane appreciate it ! I knew Bobby & Jane from their time in Humboldt and later in Fairfax. Pls have Jane contact me: howzitbob@mail.com Thanks, Bob Morrissey
4 comments
sort by
Recent
Recent Oldest A to Z Z to A
Reset
Items displayed