This year's submissions period has ended. Check out all the great performance with the Official 2016 DEAD COVERS PROJECT playlist. 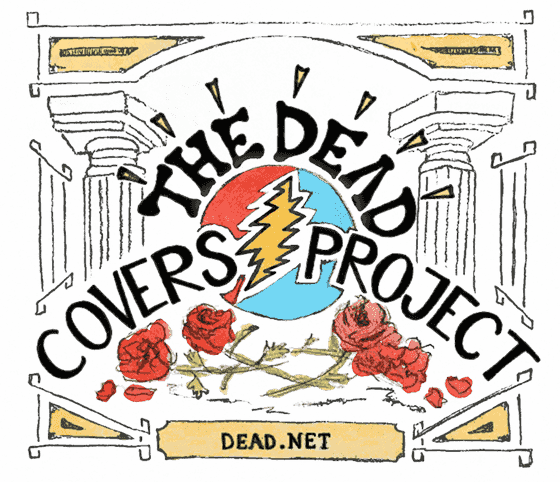 Whether you play just like Jerry or like to give the Grateful Dead's beloved classics a unique spin, the 2016 Dead Covers Project wants you! We're calling all musicians - near and far - to share your love for the music and magic of the Dead through video. Show off your musical chops and you just might find yourself front and center on Dead.net during the month of February! The rules are simple - all video submissions must contain a song either written by or recorded by the Dead. How that song is interpreted, however, is entirely up to you.

Upload your video to YouTube, tag it "DeadCoversProject," and we'll make it available to view on the band's official YouTube channel, www.youtube.com/gratefuldead. Can't carry a tune? Join the fun by "liking" your favorites on YouTube.

Yeah, we love this. It probably is the best and most anticipated feature of Dead.nets's whole year. I think the talent of the musicians and their trying to be spot-on at their best with their own interpretations really breathes life into the musty ol' crypt. Prepare to get spun in a lot of directions you never thought of, never even anticipated were on the compass. If you didn't dig it last year then pull up a rocker and get cozy with a blunt and a glass of merlot and prepare for maybe being pleasantly surprised a time or two or three at what folks are cooking up out there. It truly is testimony to the dead's body of work and one that may make you smile again and again at the same old song several more times. Don't forget to hit the "like" button much as you like!

from your account, and tag it DeadCoversProject. That way it will show up for us. Thanks!

it is really cool to see these videos!

Where is the LOVE IT ! button ?

I absolutely LOVE the Dead Covers Project... it just feels so good to know that this vibe has spread so far, so deep with no end in sight. Tell me Jerry would have not have loved this concept as well... Every submission gets a big thumbs up from me. My $0.02...

This is really awesome. I really wanted to make a video last year but wasn't able to. So, Im excited to be part of it this year. Last year Aaron Gibson did an amazing version of Brent Mydland's "I will take you home" which was by far my favorite of all the videos even though they were all great. But that inspired me to put a different spin on another Brent Mydland song.

Grant's Tomb Fire on the Mountain at Kenny's Castaways

Please let us seat you upfront at Kenny's Castaways the legendary Greenwich Village club that for 40+ years introduced many of todays most incredible musicians to the world. Sadly Kenny's was closed on 10/1/12, this was our last regular Wednesday night gig during Kenny's final week and was a very emotional night for all present. While you can't show us love in the tip jar,if you like us we would deeply appreciate a thumbs up or a kind comment! And remember to always tip your bartenders and waitresses!! http://www.youtube.com/watch?v=L7TmXxUK6Ho

A few submissions for this year :)

we love seeing them here, but make sure you do the YouTube/tagging thing as well if you want to be sure the folks working on the Project see it. Thanks and keep on covering!

Wow, here it is again, already. The 2nd iteration of the DeadCoversProject. Welcome and hello. I'm ziphler, a completely delusional, thus official, DCP editorialist, music critic, journalist, and otherwise complete nuisance. And this is the first edition of this year's ziph's picks, probably the bane of DCP's existence. It looks so far as if there's been about 130 entries in the project since sometime in December. Of course, who knows what the ground rules are this year? Are we looking at all entries since time began or is it just entries since the event officially closed March 1, 2012, OR is it since DCP announced this year's event? Is it based on when a video is tagged "DeadCoversProject" or when it was uploaded? Beats me and I'm happy with the obscurity for now since rules can all be circumvented. Anyhoo, I couldn't help but to notice a major contender right off the bat. They, it, them, him is called the volunteer string band and have jumped in with a plethora of entries. What sets VSB apart from some of the other early and aggressive "more entries is better" players is some serious musical talent. VSB seems to have a completely fluid membership and, in the case of lovelight, actually has no string players at all, instead sporting a brass band. So, sparing you anymore blather, here are the first two ziph's picks: The Volunteer String Band sings "HIGH TIME" and "LOVELIGHT" freakin well done! ziphler Oh and PS: like she says, you don't enter the project by posting videos in this forum. Every video in ziph's picks has already been officially attached to the project by TAGGING the video in YouTube with this exact one word: DeadCoversProject - (I know it looks like three words but its not). TAG IT: DeadCoversProject

Ziph, Great picks. I've been watching some of their other vids. These guys are really really good. Travis is awesome, Annie too, they freakin' nailed that High Time.

I have a stub from Roosevelt StadiumDead Show dated July 3, 1976 but cannot find any listing of that show. What Gives? Anyone know Bill

Good. I have a few more to do.

I really love this DEAD COVERS PROJECT ...!It brings so much community together & everyone has such a beautiful expression for the songs! GR8TFUL! hope you enjoy my version of " DAYS BETWEEN " :o) http://youtu.be/aKOrVE46s3I http://www.youtube.com/watch?v=aKOrVE46s3I&sns=fb

Not the Dead Covers Project per se, but heads up that Keller Williams has just turned loose a download of KEYS, a collection of Dead cover tunes with Keller on piano. All the proceeds go to the Rex Foundation.

So I tagged deadcoversproject iin my video, but i'm not really sure how all that works, It's been posted for a while and i don't wanna change the title. at any rate, here's a submission!! Terrrrapin http://www.youtube.com/watch?v=s1KTqeF5-fA&list=UUUtdE7CcPFW4jVxXQDDbO-…

Totally blown away with the talent of the musicians on the videos.

Celebrating our friend Uncle John Moyer's 60th Birthday. Like us if you are so inclined Peace

Thank you once again, for allowing all of us to express our love for Grateful Dead music in an open forum. It is really grate to see our community flourishing the way it is. Here is my small contribution ;) http://youtu.be/TM7Cn4Lr2P0

The eyes of the world section is very cool and worth the watch. The animation is fun Performance recorded live at the Barking spider Tavern. Unfortunately, very little live footage of the performance

Relix Recording Artist, Stackabones, is honored to join the Dead Covers Project with our acoustic rendition of Brown Eyed Women. http://youtu.be/onXn1phEe00 Everyone else's contributions are awesome, what a great project! http://stackabones.com

BIG THANK YOU ! to everyone who has been really supportive!

Mountains Of The Moon

Here is another submission featuring Duck Duck Goose playing a Scarlet/Fire. We hope you enjoy it!!!

Dupree's Diamond Blues for you

I don't facebook (and wont' Big Bro!) but wanted to let it be known that this is a favorite. Lot of talent in there. Drummer is silky smooth. Good voice. Good vibe. Great video! Loved it and would love to see more of those guys. Made me feel like I would like to hang out with them too; really great video!

http://www.youtube.com/watch?v=EGA_pJZhmuQ my submission for the Dead Covers Project. solo acoustic Jack Straw. One of my favorite songs, always enjoy when Bobby plays it at a show.

What a great month it's been!

Thank you, kind folk at dead.net for making this possible again!What an inspiring community we have. Here are Dark Star and Bird Song on piano. Enjoy and peace. http://www.youtube.com/watch?v=s5j4EYuNhU4

We are not your average Grateful Dead cover band... https://www.youtube.com/watch?v=9jOVKbayYCk

HYRYDER would like to say "Thank you...for a real good time!"

HYRYDER would sincerely like to thank Dead.Net and the Dead Covers Project for allowing us the oppurtunity to be involved in the 2013 competition! It is a great honor and a dream come true! This year's DCP has been an amazing showcase of all the very talented artists in this country and around the world who are helping to keep this musical tradition alive and it is a beautiful thing! We are deeply honored to have been a part of it this year.

for what it's worth

Lots of great music, but I really prefer the ones done by "non-professional musicians," like the Fears Sisters and Roxy. Those were my two favorites! And Facebook sucks, by the way.

And so it begins

"Victim or the Crime," by accident of birth. Hope everyone digs our entry. It looks great in 1080 HD. Cheers!
502 comments
sort by
Recent
Recent Oldest A to Z Z to A
Reset
Items displayed