Based in Chicago, The Giving Tree Band most closely resembles the spirit of the '60s and early Grateful Dead with their commitment to living, working, and touring in communal harmony. Dabbling in bluegrass and Americana, the group is about to release their 4th album, Vacilador, featuring their mighty fine rendition of "Brown Eyed Women." Grab a free download of the track here and catch them on tour this summer with Joe Purdy.

Learn more about The Giving Tree Band in the exclusive interview with founding member Todd Fink below and at www.thegivingtreeband.com .

How did you get into the Grateful Dead?

My brother and I got into the Dead when we were a little bit younger, mostly through our cousin Steve who we call "The Creeper." He had gone to over a hundred concerts and turned us on to their music. My brother played in a bluegrass band with him and they got into a lot of Jerry's side-work with David Grisman. That's kind of how it started. We just kept exploring the rich history there - the music, the side projects, everything. I got really inspired by the band. I really think of them as one of the greatest American musical acts. 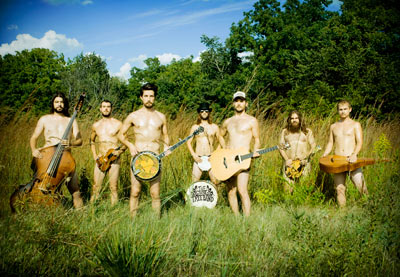 The Grateful Dead's legacy is so rich and there are so many layers to it that I think it's easily misunderstood. Because they cover so many different aspects of American music, I think people catch some peripheral imagery or aspects or sound of the Dead and from that, they make their inferences about what the band is all about. You might see a skull sticker and you draw your own conclusions. I remember seeing the skull before I had ever listened to a song and I assumed it was something like Megadeth. You can easily misunderstand the depth of what they are all about. I think part of our job as modern artists is to educate fans about the rich history of American music. That includes the Grateful Dead. We should encourage people to go deep in to their catalog and to their concerts, their side projects, lyrics, stories and the lifestyle - and what they will uncover is a real American musical gem.

How did you select "Brown Eyed Women" for your cover?

We chose that one for a number of reasons. My brother E really loves that tune. He heard that the members of the Dead and Robert Hunter had wished they had done a proper studio recording of it, so we thought it might be neat to do. For me and my brother, it also feels very personal. Our father had been sick in the last year. He had a surgery recently and he's kind of struggled with losing some of his abilities, through his medical condition. Gentle Jack Jones, the protagonist of the song, kind of reminds us of him - talking about how things change. It kind of felt close to home for us with what we have been experiencing with our father. My brother was able to sing it with a full heart and really kind of make it his own. The timing seemed right. Right around the time we attempted the song in concert, without even arranging or working on it, we'd become aware of the DEAD COVERS PROJECT from Woody, another guy in our band. It just seemed like the right thing to do.

We hear you've decided to include the song in an upcoming release...

We're really excited about it. We have a new record. It's our 4th studio album. It's called Vacilador. "Brown Eyed Women" will be on it. It will come out later this year. The style and the vibe of the album really suits that song. It's interesting because we didn't originally intend to include it but seeing how the album unfolded, it seems like it fits right in stylistically which is nice because I think that fans will really appreciate the other songs on the record too. It's something we've been working on for a year and if people like "Brown Eyed Women" and our arrangement of that, I think they will really enjoy the entire record. Fans can visit our site to learn more about the record and how to get the music. We'll be releasing tracks all year leading up to the release. 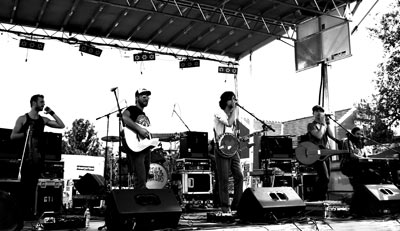 Is it true you're not only band mates but roommates?

We have a home outside of Chicago. It doubles as a recording studio. As the band grew, gradually everyone moved in, and it's helped our project to grow. Living together has helped us build a deeper bond, beyond music. It's really like a family at Crooked Creek Studios. It's close to nature. There's a creek nearby. There's a forest in our backyard. It's a bit isolated so it's kind of a very sacred space that's conducive to creativity. Living together has helped us stay focused on music and growing the project together, solidifying our chemistry as members, building that bond. I think that's special and I think it's rare in music these days. The more we travel, the more people we meet, we find that it's not so common to have that kind of community behind the music.

Living together too is very much in line with the aesthetics that the Grateful Dead had, especially in the Haight-Ashbury days. I think that's something we've also been inspired by because of bands like the Grateful Dead, The Band's house Big Pink. I think our band is in the tradition of real classic rock and roll bands that had that family vibe.

Your website is very cool and uniquely, it's carbon neutral. Tell us a little more about your green initiatives.

My brother and I have this personal philosophy that we want to live as consciously as we can and be as healthy as we can. We see those two things as right in alignment with each other - environmentalism and personal health. Your body is the first environment that you are responsible for, so taking care of it is important to us and it's important to everybody in the band. We've extended that to the way we run the business of our band. We try to make choices that are environmentally friendly - that includes our music production. We have used solar energy to produce albums. We've used renewable energy to manufacture CDs. All of our music is packaged with 100% recycled materials. The shrink wrap is bio-degradable corn cellulose. All the inks that we use are soy inks or veggie inks that are non-toxic. The rest of our merchandise is also eco-friendly, like organic cotton shirts and recycled shirts. Also, a number of our instruments are made of recycled woods. We have a luthier in Ohio who's made several instruments for us. He finds naturally fallen trees from storms and builds instruments from them. He uses non-toxic finishes and so on... so we've got some really special instruments. Our drum kit is made out of bamboo. Bamboo is a more sustainable, renewable wood source. 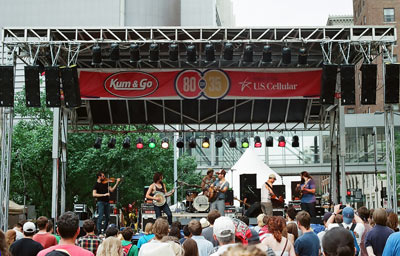 Does that affect the sound?

It does give it a bit of a different quality but it sounds nice. It's a really hard wood too so my brother E can climb up on to the drum kit - to the kick drum - during concerts and jump off it and it won't break.

It also affects the types of shows that we play, we try to do a lot of concerts that raise awareness. We try to coordinate with non-profits doing all different kinds of things to help the planet, improve social justice, and many other great causes. That has been an essential aspect of our band. It's who we are and how we've operated from the very beginning. It's a core value that we don't ever want to lose sight of.