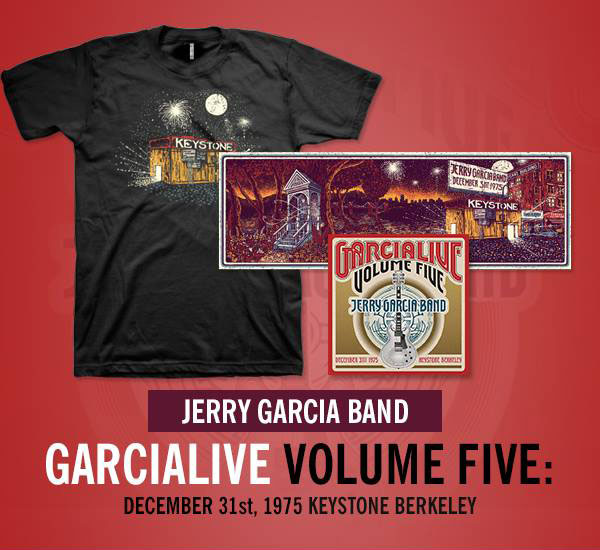 GarciaLive Volume Five: December 31st, 1975 Keystone Berkeley celebrates the Jerry Garcia Band's three set performance at the storied Keystone Berkeley. While Garcia celebrated many new years on stage with the Grateful Dead, this performance holds the distinction as the Jerry Garcia Band's lone New Year's Eve appearance. Fresh off a Winter tour which yielded the transcendent performances captured on 2009's Let It Rock live release, Garcia is joined for this performance by mainstay John Kahn on bass, Sly and the Family Stone drummer Greg Errico and legendary rock pianist Nicky Hopkins. Hopkins' accolades are almost too numerous to list, but include a seemingly endless list of collaborations with The Beatles, The Who, and the Rolling Stones, among many others. And what New Year's Eve celebration would be complete without a few friends? Grateful Dead bandmates Bob Weir and Mickey Hart along with Kingfish's Matthew Kelly join the fold for a vibrant evening of music.

Was listening to Dead channel on XM last night and they played a GREAT show from The Arc in Boston, 4-22-1969. Does anyone know if there is a legitimate decent recording of this show to be downloaded? The second set is staggering. Thanks in advance, Plaggenfuss
1 comments
sort by
Recent
Recent Oldest A to Z Z to A
Reset
Items displayed