If Jim Anderson isn’t as well-known as some other photographers who chronicled the Dead, it’s not because of a lack of quality in his shots. On the contrary, the Connecticut-based photographer has an exceptional eye and has taken thousands of great photos of the Dead and other bands since he started shooting concerts in the early ’70s. In just the past few months, his historic Dead shots dominated the booklet for Dave’s Picks No. 2 (from Hartford 7/31/74) and are spread throughout the book included in the new Grateful Dead: Spring 1990 box. And he’s had many of his photos appear in earlier Dick’s Picks and other releases.

One reason Anderson has flown under the radar is that he never actively pursued marketing his photos while the Dead were around. “I wasn’t trying to get published,” he says when I ask why he didn’t approach Dead ’zines such as Relix and The Golden Road. “I didn’t have any intent. I knew I needed to be shooting, but I didn’t really know why. It never occurred to me to, say, go to Rolling Stone and try to get my stuff in there. Shooting the Dead was always more of a personal project for me.” Even keeping a low profile, magazines sometimes found him, and his work has been printed in numerous publications, as well as The Deadhead's Taping Compendium.

Another reason Anderson rarely took his passion for shooting the Dead beyond his own darkroom is that he has always had a “straight” photography business to run—rock ’n’ roll was never going to be his bread and butter.

“Photography has been in my blood,” he explains. “My dad was a photographer, and when he died in the [mid-] ’70s, I took over his business,” which was primarily devoted to commercial and legal photography. Jim started working summers and weekends with his father when he was about 15—“I ran the darkroom in the house”—and by 18 was getting assignments from the company, shooting accident scenes for insurance companies and such. Jim went to college planning to get into television engineering, but the photography business proved to be too powerful a lure.

A fan of classical and jazz growing up—as well as lots of rock ’n’ roll—he says that it was Phil’s playing on the 1971 “Skull & Roses” album that first hooked him into the Dead. “My first show was Waterbury [Conn.] 9/23/72, and unfortunately I didn’t bring my camera with me,” he says. “I was going to go the next night, too, and I was planning on shooting, but it didn’t work out. I still have the un-ripped ticket.

“My next show wasn’t until ’74 [Springfield 6/30],” he continues. “Every time they were around here in ’73, I was somewhere else, or they were playing some place not that far away—like Utica or Springfield—and I didn’t know the shows were happening. It wasn’t easy to get information about the band in those days.”

He recalls that shooting in large venues like Dillon Stadium in Hartford, or in other general admission situations, “was really a challenge. In a lot of those places, you really can’t move around. You have to get in one spot and stay there, which really sucks if you’re shooting. I was not a forceful person when it came to getting up close. I didn’t want to interfere with other people’s enjoyment of the show by being an asshole, like some photographers. So I’d get as close as I could get and get what I could with the lenses I had with me.”

His show-going picked up after the Dead’s ’75 hiatus, and by the late ’70s he was hitting short tours up and down the Eastern seaboard with friends, usually shooting and taping, though eventually he decided it was too expensive to keep up with equipment upgrades, so he left the taping to friends. His first significant road trek was a five-day, three-show jaunt to Virginia and West Virginia April 14-16, 1978, and for that last show, in Huntington, West Virginia, he landed front row-tickets—a photographer’s dream! 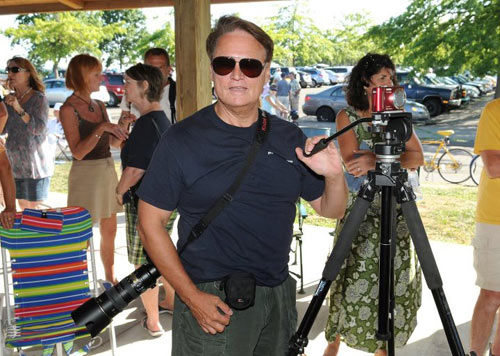 “It was a killer show in the middle of nowhere, and the audience sat in their seats and hardly moved the entire show,” he remembers. “They had no idea. The arena had been split in half—they’d only sold half the arena. Hardly any Dead Heads made the trip from New York or Chicago. We stayed in the same hotel as the band—the Holiday Inn downtown—and had a great time. But it was very strange.”

The following January, at the Utica Memorial Auditorium in upstate New York, Anderson’s relationship with the Grateful Dead changed forever. “That’s where I met Candace,” he says of the Dead’s uber-talented lighting designer, Candace Brightman. “I was still taping then, and I was right behind her [at the rear of the soundboard]. She saw my gear and gave me a smile. I told her I loved her work and that I’d taken a lot of shots that showed her lighting, and that I’d love for her to see them sometime.”

Much to Jim’s surprise, Candace asked him to bring shots to the next show, the following night in Springfield, Mass. He left her a couple of pages of slides that night, and when he next saw her, two nights later in New Haven, she raved about his work, handed him a laminate, and urged him to shoot for her in Providence and Buffalo, which he did.

It would be a few months before the Dead came back to his neck of the woods, but Candace departed for a spell following the May ’79 tour and didn’t come back full-time with the group until 1982 (through she did light the 1980 Radio City shows). With Candace gone, Jim lost his privileged access to shooting from the soundboard and roaming wherever he wanted, but when she returned he quickly resumed his role.

“I was documenting these shows for her,” he comments. “It’s a project that went on for a decade and a half, until ’95, so she’d have a record of the lights. Whenever I could I’d even write down the song that was being played for each frame.” In later years, he sometimes augmented his 35 mm Nikon with a 2-1/4 format Hasselblad on a tripod: “A lot of those images are stunning; really gorgeous. They enlarge beautifully.”

Jim has fond memories of shooting the Spring ’90 tour, and though he says, “My gig was to shoot lighting looks for Candace,” at some of those shows he also went down into the pit to get close-ups of the band, too. “There were always other guys who were doing that—that’s what they really wanted—so I really just did it for fun. 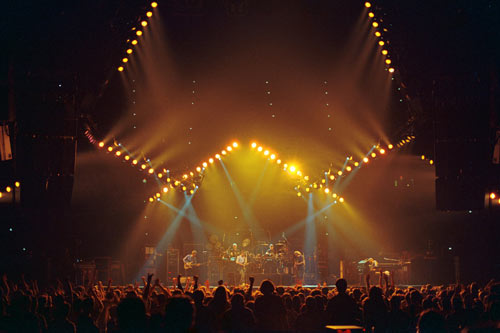 A sneak peek of one of Jim Anderson's photos that appears in the Spring 1990 hardcover book. Photo Credit: James R Anderson

“The way I've always approached shooting rock is to capture the technical staging,” he adds, “the feel and look of the entire show and how it’s experienced out in the arena, hall or stadium—not so much the musicians at their craft close up. My work has included shooting Clapton’s and Townshend’s solo tour lighting for Lighting Dimension magazine as a result of my kinship to lighting designers’ work.

He was there at Soldier Field in Chicago for the final Grateful Dead concert July 9, 1995, and in the post-Garcia years he has continued to shoot bands when he can. Still, there is photo business to run—an operation that keeps him so busy he’s barely had time to look back at his past work, much of which sits in carefully labeled boxes, unseen for years.

“I have many thousands of photographs that need to be scanned and indexed,” he says. “I kept detailed notes, but I don’t have the time to deal with it. I’m a meticulous perfectionist and I go through every image and make sure I get it right [when I scan it]. Each frame takes a lot of work. And I do a show all the way through—I don’t want to just take one or two images out. I would probably need to take off about a year to get through it all, and I don’t see how that could happen.”

Hey, Jim, when I win the Mega-millions jackpot, I’ll pay for it to be done. Because there’s valuable history in those boxes, and someday it’s got to come out.

If Jim Anderson isn’t as well-known as some other photographers who chronicled the Dead, it’s not because of a lack of quality in his shots. On the contrary, the Connecticut-based photographer has an exceptional eye and has taken thousands of great photos of the Dead and other bands since he started shooting concerts in the early ’70s. In just the past few months, his historic Dead shots dominated the booklet for Dave’s Picks No. 2 (from Hartford 7/31/74) and are spread throughout the book included in the new Grateful Dead: Spring 1990 box. And he’s had many of his photos appear in earlier Dick’s Picks and other releases.

Jim your 2nd Show 6/30/74 in Springfield Ma. was my 1st Show! Would love to see those pics, would bring back fond memories of how I got on the bus in the first place, and remain there to this day!

Have a great culling. Look forward to the finished product!frsh-aire

Amazing read about "the-man-behind-the-lens", Jim Anderson. I really enjoyed Jim's comment on not wanting to interfere with attendees of a show, "I was not a forceful person when it came to getting up close. I didn’t want to interfere with other people’s enjoyment of the show by being an asshole, like some photographers." So many supposed pro photographers push & shove and ruin everyone else's vibe at a show because they think what they are doing is more important. For those Dead Heads who want to investigate Jim's on-line photo library, you gotta check out - Photog.com. Peace.

i stumbled upon his photo's on the interweb a few years back and they were just amazing. i had been an avid amatuer photographer back in high schoo but had only brought my camera to shows a couple of times, it always was extremely difficult to get great photos. so seeing jims work was a real revelation. thanks jim for your beautiful work
4 comments
sort by
Recent
Recent Oldest A to Z Z to A
Reset
Items displayed