Front and center in the Nike SB Dunk Low Grateful Dead is the band’s most lovable symbol, the dancing bears, which first appear on the back cover of the group’s 1973 LP "History of the Grateful Dead, Volume 1 (Bear’s Choice)." Set in three colorways, the shoe playfully features bear-inspired detailing, such as a faux-fur and suede upper, a frayed Nike Swoosh mimicking the bears’ collars and an image of the bear on the tongue. (Another iconic Grateful Dead logo, the Steal Your Face skull, is printed on the underside of the sockliner.)

The community-rich bond among Dead Heads is even more inviting thanks to the band’s fun, furry ambassadors. While the bears may not have influenced the music itself, the man behind the bears — an enigmatic audio engineer nicknamed Bear, who helped develop the group’s Wall of Sound system as well as the cartoon symbol — certainly did, and his work brought a resounding impact to the Grateful Dead’s legacy, much like Nike SB founder Sandy Bodecker’s impact on the Dunk and skate culture.

"As the band’s benefactor, Bear was an incredibly huge part of the Grateful Dead’s ability to become who they were,” says David Lemieux, the band’s archivist and legacy manager. “They were talented musicians, but they would not have had the financial freedom to forgo jobs, move to Los Angeles and practice for 14 hours a day. The band wouldn’t become what it is today without Bear’s innovations and contributions. The same fiercely independent spirit from Bodecker helped create that authenticity within the skate community.”

and here they are!

First they're ugly as sin, but how much are they?

Neither Mrs DJ or I got where we are today buying sneakers that look like fruit!

Companies that pay people in rice get no quarter from me.

I’d this what we can expect from GD these days - big corporate deals to make $$$ off the backs of slaves. Shameful.

I just posted the same thing. Disgusting. Made by slave labor in a country that will "disappear" your family members if you do not toe the Chi Com line. Then Nike spits on Americans and gives millions to uneducated sports "talent" who complain while counting their millions and whining how "oppressed" they are. What a nation of sheep. Perhaps Jerry was hopefully the only one cynical enough to see the complete BS of this. Hopefully. The rest of the members of the Dead have turned out to be no one I would ever give the time of day to. There is a saying about finally meeting your idols. Though I idolize no one. They have proven themselves to be a bunch of ignorant shmucks. Spots of musical brilliance for the first 10 years or so and then an decades of scat for nothing more then the weekly blow and skag bill. The excruciating end finally comes and then a corporate Warners merchandising sellout. Now the scat continues 20 fold. Don't forget to order the new Dancing Bears emblazoned toilet brush. Strictly limited of course for the bargain price of $49.95. Chumps. These pikers have enough. Besides, with today's popular Socialism, everything should be free, right? Free GD toilet brushes for everyone. Yeah. The term "Dead Head" always made me wince and I always flinched at it....but if ever it was so apt.

Would love a pair of mens 12 in any color

I would love to get a 10.5 in green but I don't care what color I just want a pair to put up in my collection like the rest of my shoes DEADHEADS

These shoes are ugly as hell. What's GD teaming up with Nike for anyway. Without Jerry in the dream, there's nothing the other ones won't do. (~);}

Answer, go find the music elsewhere. Stop supporting the beast. The rest of this corporate swill...you don't need it. The remaining living members have shown themselves to be some truly abhorrent individuals. Extremely greedy and ignorant.

I need the green pair in a sz 7, how do I purchase

Am I registered now?

how do I cop tomorrow in LA timing I need a 9.5 green or yellow)

How can I buy the green…

How can I buy the green dunks tomorrow Central time?

i love the fur aesthetic

It would be great to purchase the yellow pair in size 8.5. Reminding me of sunny Los Angeles. Even when it won't be sunny.

US10,5 It would be very, very, very nice...
Greetings from BraunSchweig Germany

Grateful for any pair

These are one of the coolest sb’s that have come out in so long and I would love to add a pair size 8.5 to my collection!

Hey, i´am skater from Czech Republic and i really love the work on these shoes!!! it´s the the prettiest dunk´s ever been done for sure. I´d love to buy pair of green ones US10 to rock them.

Never Had A Pair Of Sb But…

most of these people want these for the resell i want a pair to collect these resellers need to be stopped as well as the botters cause there screwin us real collectors out of shoes were we have to pay $2,000 for this shoe if we don't win the raffle which is really ridiculous

Loved the pair asthetics as i would made a pretty fancy collection piece for grateful dead memory. And i would love to have size US11.

Both a Deadhead and shoe collector.. Love to have these forever on display NFA

what i would give for a pair of them dunks.. trippy as hell and would be fantastic to stroke on an acid trip! Size 9.5 uk (10.5 us) or (44 euro) pleaseeeeeeeeee

Looking to get size 9.5 us mens in the orange color way.

I would like to get a size 10 in the green colorway.

green one is dope

ohhhhh my love the yellows and green bear kicks
7.5 is my size
I'm all in to win a chance

Need them so bad in us13

Would love a size 8 in yellow!!

Not very materialistic, but in this case, I NEED A PAIR SIZE 11! lol
One of the coolest kicks I've ever seen!
DEAD HEAD 365

Killing it with the dead

I need a pair! I prefer the orange pair, but would be grateful to get either pair. Especially the orange though lol. Sz 10.5! 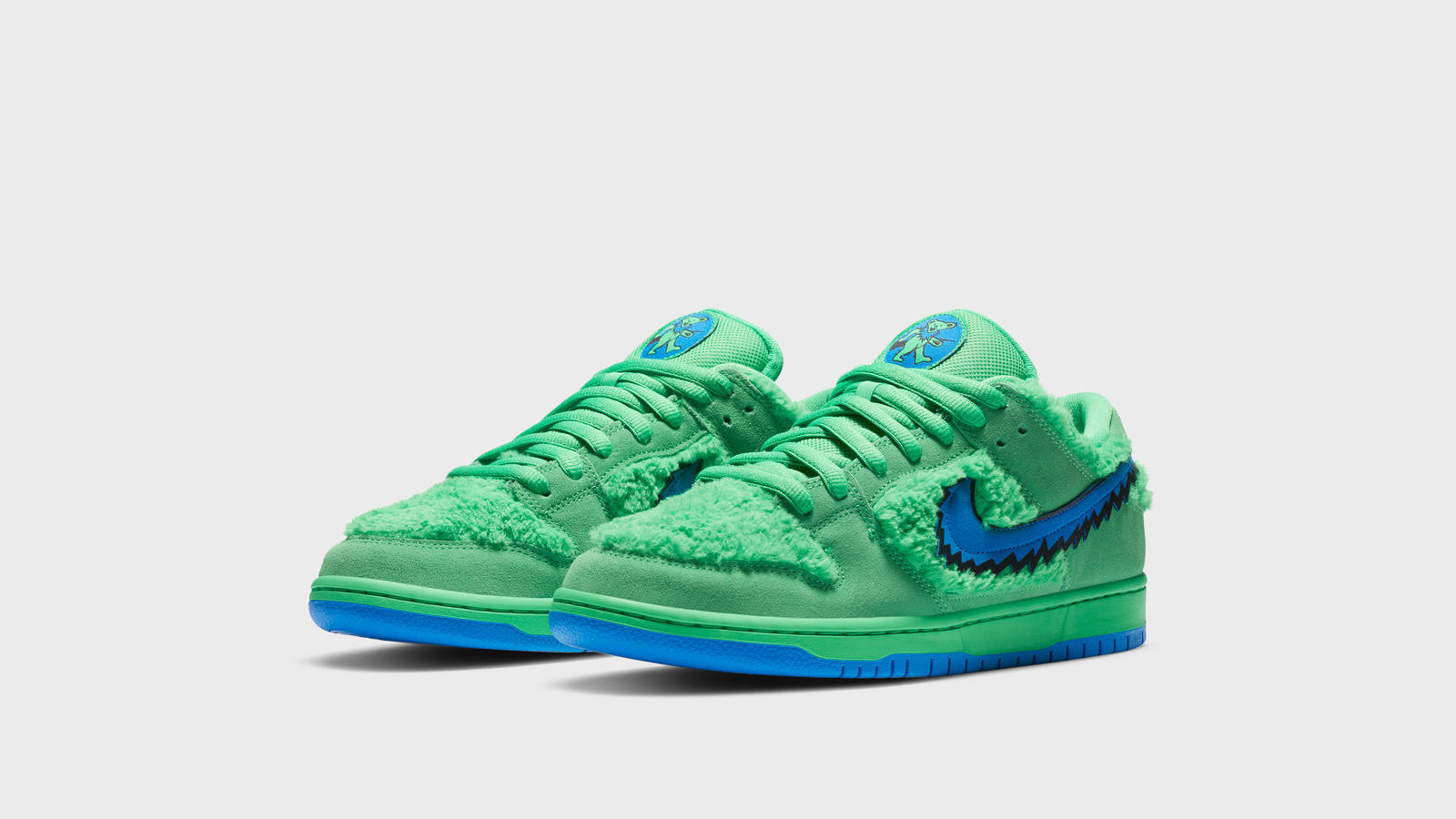