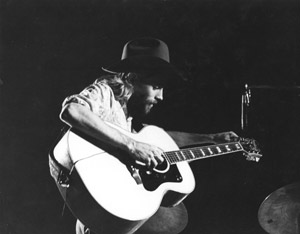 The extended Grateful Dead family and Dead Head community lost a great talent and a dear friend on July 21, when John “Marmaduke” Dawson, longtime singer, songwriter and guitarist with New Riders of the Purple Sage, passed away peacefully after a long period of failing health. He was 64 and had been living in retirement in Mexico.

One of the best-loved and longest-running entries in the country-rock field, New Riders of the Purple Sage came into being in 1969, when John Dawson, looking for an outlet for his original songs, conspired with Jerry Garcia, who had started playing pedal steel guitar, to form a little country-tinged bar band. They recruited David Nelson, a musical associate and friend of Garcia’s going back to the thriving Palo Alto folk scene of the early 60s, to play lead guitar. Grateful Dead audio engineer/producer Bob Matthews was the original bassist (later replaced by Phil Lesh and then, more permanently Dave Torbert); Mickey Hart played drums for the band’s first year, after which he was replaced by Jefferson Airplane alum Spencer Dryden.

After gigging for a while in the Bay Area whenever gaps in the Grateful Dead’s schedule allowed, the New Riders began to obtain a higher profile when they began to tour as featured support act with the Dead. Especially memorable were the marathon “Evening with the Grateful Dead” shows during much of 1970, which opened with an acoustic Dead set (with occasional guest appearances by NRPS members), followed by a full set by the Riders and closing with electric GD. John Dawson emerged as an energetic and engaging front man, singing songs from his own rapidly growing body of original work, as well as country standards (“Together Again,” “Truck Drivin’ Man”), and some classic rockers thrown in for good measure (“Lodi,” “Honky Tonk Woman”). 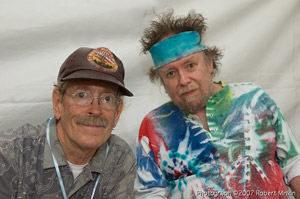 Dawson’s songwriting skills were impressively displayed on NRPS’ eponymous debut album, released in 1971. He was the sole composer of all ten of the records tracks, which included such perennial favorites as “I Don’t Know You,” “Portland Woman,” “Glendale Train,” “Henry” and “Last Lonely Eagle.” Those last two songs, in particular, illuminated a unique aspect of John’s talent: an ability to infuse country songwriting with a distinctly hippie-flavored POV (“Henry” was a rollicking breakdown about a pot smuggler’s Mexican exploits, while “Eagle” was a socially and environmentally conscious lament for endangered nature and lost values). In addition to his notable body of work for NRPS, John has another indelible songwriting credit: as co-writer, with Jerry Garcia and Robert Hunter, of one of the most enduring songs in the Grateful Dead canon, “Friend of the Devil.”

When Jerry Garcia, stretched a bit thin by his multiple musical endeavors, left NRPS in late 1971, the band didn’t miss a step: with the addition of pedal steel ace Buddy Cage, they were able to emerge from the Grateful Dead’s shadow, adding such excellent albums as “Powerglide,” “Gypsy Cowboy” and “The Adventures of Panama Red” to their catalog, and becoming a popular national touring act in their own right.

John continued touring and recording with the Riders, through various personnel departures and returns, into the 1990s. While his health problems prevented him from joining in on various NRPS reincarnations in recent years, he remained close friends with his old bandmates, and did reunite with David Nelson and Buddy Cage for one final performance together in 2001, at a birthday bash for longtime NRPS friend and archivist Rob Bleetstein.

Thanks for a great ride, McDuke.

Hangin' out with Jerry, Janis, Pigpen, Keith , Brent, Vince & all the REST; Have & will always miss you John. Bless You

Have a wonderful ride into the sunset.

SHED A TEAR FOR THE FATE OF THE LAST LONELY EAGLEFOR YOU KNOW THAT HE NEVER WILL LAND....

Thank's for the tunes and the smiles they bring me. If the doors of perception were cleansed, everything would appear to man as it is, infinite. William Blake

Tough news indeed! As I

Tough news indeed! As I noted elsewhere, I thought Mramaduke was a REALLY good guy. I was lucky enough to interview him a number of times through the years, the last time being my favorite: When I was writing my Garcia book in '97 or '98, I spent a very long evening over at his house in Mill Valley, doing an interview and hanging out with him and his lovely (now deceased) wife Alanna, drinking wine and shootin' the shit. I have hours of good stuff on tape, some of which got into the book... Last time I saw him was at the Summer of Love anniversary in GGPark a couple of years back when he sat in with the NRPS on a couple of tunes. Considering I had heard that he was in very poor health back then, I was delighted to see him looking so good that day! The NRPS were a very important part of my life in the early 70s; really loved that band a lot--especially '70-'73. The first album is a classic, of course, but "Powerglide" is excellent, too, and their great unheralded disc is their third, "Gypsy Cowboy." One of the first bootleg CDs I ever bought years ago was called "Last Lonely Eagles"--a '70 show (Halloween, maybe?) that has an amazing "Dirty Business." One of the great thrills of my early fan-boy days was, when I flew to Chicago in the fall of ''71 to begin my fall quarter at Northwestern, who should be wandering the halls of O'Hare, maybe changin' planes or something--but the entire Grateful Dead and NRPS! I passed them in the hallway and said an enthusiastic "Howdy!" (too embarrassed to say anything else) and Garcia said "Hi, man!" back (BJ's first JG interview!), and I vividly recall John Dawson literally sliding along the hallway wall with a big grin on his face, looking extremely spaced. I was in heaven!

This is really sad news indeed. My first concert ever back in April 1974 was David Bromberg and NRPS at the Academy of music in NYC. I agree with Blair about their early records. Gypsy Cowboy is one of my all time favorites. I love the live records because John talked a lot between songs, and he just seemed like a really good person. Rest in Peace Marmaduke...I'll hoist a few for you tonight, and play some vintage NRPS. Peace, Michael

Friend Of The Devil

I think Marmaduke wrote Friend Of The Devil with Garcia/Hunter, he wrote and sang most of the early New Riders material. RIP Marmaduke!

Add another member to the greatest rock & roll band in heaven

Thank you for all the beautiful music.Peace, Aaron

It's funny how I just started breaking out all the old recording's with the release of the new one. I used to see NRPS all the time hear on LI back in the 70's. My favorite show I saw was when they opened for JGB at the old commack arena in 78. I had seen them many times before but this night they just opened all there tunes up for some really great jams. They brought those song's to places I'd never seen them do before.Kinda figured this day was coming with the news i've been reading about him but it still shock's you right away . RIP Marmaduke I will always remember you fondly! Rogue

sad news indeed, NRPS was my first concert ever just two blocks from my house at Montclair State College in 1975. Panama Red was in the air that night for sure! Also remember the band waiving to the crowd from their helicopter at Englishtown in 1977. And of course seeing him at the Sweetwater for Mr. Boys 40th Birthday blowout.

Very sad news. By all accounts, JD was a lovely person & he has brought happiness to millions of us all around the world. RIP. Keep the faith. Steve, Bristol UK

...for all the wonderful tunes and the good times that went with them.Have a nice ride,Big Brother

...for all the wonderful tunes and the good times that went with them.Have a nice ride,Big Brother

bye john. thank you so much. teddyb

Farewell to John who taught me to flip bottle caps late one night in Duluth Minnesota. Riding that Glendale train to the great concert in the sky. Hopefully, he will not need to sing each and every song (inside joke).
20 comments
sort by
Recent
Recent Oldest A to Z Z to A
Reset
Items displayed