home > features > Help On The Way for RatDog: Kimock Steps In For Karan 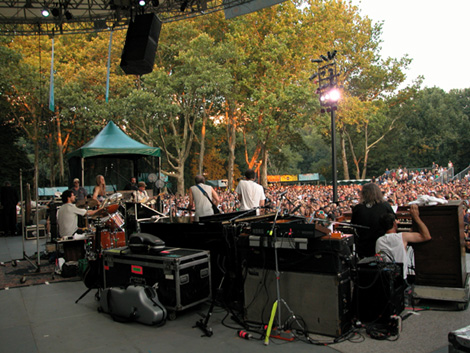 When life looks like easy street… well, you know how the rest of that song goes. And danger could not have announced itself much more dramatically at RatDog’s door than it did last month, with the news that the band’s great guitarist (and more important, our dear brother), Mark Karan, had been diagnosed with throat cancer, and would have to take a break from touring so that he can get the best and most thorough treatment available. Just days before the start of a long summer trek, the members of RatDog were faced with multiple challenges: dealing both personally and professionally with the absence of such a close pal and vital musical collaborator; and finding someone who could, on dauntingly short notice, step into Mark’s shoes. The latter task was made immeasurably easier by the availability of a longtime member of the extended family: Steve Kimock.

“Steve is an old friend and a good friend,” Bob Weir explained when we caught up with him a half-dozen stops into the tour. “He already knew a lot of our repertoire, having played it in various contexts over the years, and Steve and I know each other’s sensibilities. So we couldn’t have been luckier, given the situation.” 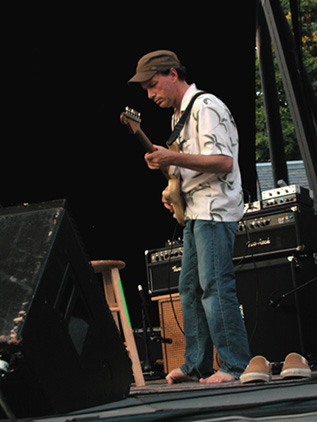 It takes more than luck, though, to incorporate a new musical element into a close-knit unit like RatDog. There’s also a lot of time and effort involved, and this band clearly has the resolve and work ethic to make it happen. As of this writing, the concept of “down time” had not yet been introduced to the touring party. On the tour bus, in the backstage rehearsal room and in every available moment, the musicians work and re-work the material, figuring out how to incorporate Kimock’s distinctive, gorgeously melodic playing into the ensemble sound, and how to tailor their own playing to complement his. As Weir notes about RatDog: “There’s a collective sense of orchestration that only occurs when you’re together for a long time.” Asked how he thinks Kimock is doing at finding his way comfortably into that collective, Bob adds, with great admiration, “Steve astonishes me several times a night.”

The audible evidence of the tour thus far emphatically suggests that the astonishments will keep right on coming.

Another source of delightful discovery on the July leg of the tour has been the immensely entertaining presence of Keller Williams, who has been opening the shows with his uncanny solo act, using high-tech looping devices to transform himself into a kind of one-man jamband. Williams has also been sitting in with RatDog at various spots in the shows, with Mr. Weir returning the compliment by guesting on a few tunes in Keller’s set each night. “Keller is a whole lot of fun to play with,” Bobby notes, “and we’ve been figuring out tunes we can do together on the fly, just running through ‘em once or twice and then seeing what happens to ‘em on stage.”

The August leg of the tour will commence at one of the best events of any summer, The Gathering of the Vibes, which returns this time around to Bridgeport, CT, after several years in upstate New York. 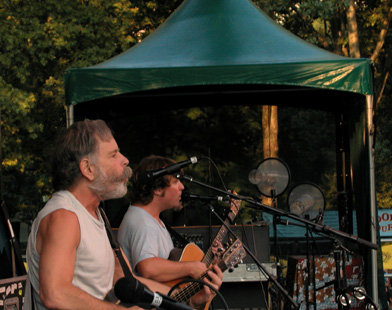 From there it’s on to Lowell, MA, hometown of Jack Kerouac, for a very special event celebrating the 50th anniversary of Kerouac’s great and hugely influential novel, On The Road. Before the performance, Bob Weir and Grateful Dead historian Dennis McNally (who also wrote Desolate Angel, an acclaimed Kerouac biography) will take to the stage to discuss Kerouac and Neal Cassady, who was immortalized in the novel as Dean Moriarity and would later be a pivotal force in the formative years of the Grateful Dead, as primary driver (“Cowboy Neal at the wheel”) of the legendary Merry Pranksters bus known as “Furthur.”

The summer wraps up with a bunch of dates pairing RatDog with another bunch that has a lot of distinguished history behind it and a lot of great music still in it, the Allman Brothers Band.
Healing vibes to Mark!
Byline
Gary Lambert
Display on homepage featured list
Off
Feature type
News

ratdog and ABB show at bushkill, pa in august

first i want to say i will miss mark karan and hope he's doin' ok. I'll miss his playing and influence on the music and the band. Next I am looking forward to hearing steve with the band and his distinctive style of playing. finally, if some moreflavor or assisstence is needed I'm sure that either Dereck or Warren from the Brothers would make some acceptable contributions musically as well as anybody in ratdog could certainly add some of their wonderful flavor to the ABB stew. Could be quite the night!! Plus if anybody hasn't been to the laurel center for a show i think they will be very satisfied with the venue- it's fairly new and interesting. only problem could be traffic on some of the PA blue highways.

One in 10,000 come for the show To tell you the truth, i almost gave up on the DOG. After hearing DJ LOGIC, in the band, I hated, listened again and then loved this new kind of DOG. Then Wasserman left, I hated the fact that his replacement rocked. I mean that bass rocked my bones! (sylvester's) But Rob felt like an old friend, he gave a sense of dignity to the music, if not to the shows. I am remorseful that it took Mark Karan's illness to bring Kimock to form a new DOG, for a while. A rare bread that I had not conceived. With the current line-up, along with the support of Keller. The show I caught on this tour, (opening night in Chi-town), blew me away. It was the best Ratdog since the Family Reunion's second nght/day. Which included Logic, whom I gave the cold shoulder to for a year.
Band
Bob Weir