There has certainly been no shortage through the years of musicians paying tribute to the songwriting legacy of Robert Hunter and Jerry Garcia, but one of the most intriguing recent releases in that regard—and one that ol’ Jer surely would have enjoyed immensely—is bluegrass legend Jesse McReynold’s Songs of the Grateful Dead on Woodstock Records. 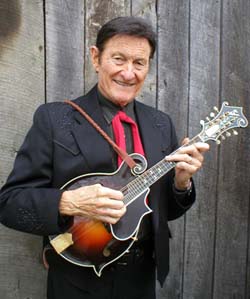 McReynolds may be a name unfamiliar to many of you, but he was a favorite of Garcia’s, and with good reason: Jesse and his brother Jim spearheaded one of the best-loved bluegrass outfits of all-time: Jim & Jesse & the Virginia Boys. The duo started playing together in the late ’40s and signed their first major label contract (with Capitol Records) in the early ’50s. Jim & Jesse had actual hits in that era, and by 1964 had been inducted into the Grand Ole Opry in Nashville.

That was the same year Garcia and his pickin’ pal in a Bay Area group dubbed the Black Mountain Boys—Sandy Rothman—undertook their famous Bluegrass Quest, in which they drove from the Bay Area to the East and Midwest to see and record as much bluegrass and old-time music as they could. In the entertaining liner notes for Jesse’s Songs of the Grateful Dead: A Tribute to Jerry Garcia & Robert Hunter, Rothman recounts an episode where he and Jerry were in a motel room in a small town in Alabama during their trip and excitedly recorded Jim & Jesse playing a full set on a local TV show. Garcia was a huge fan of Virginia Boys banjo player Allen Shelton, and both he and Sandy admired Jesse’s mandolin chops, Jim’s rhythm guitar skills and their patented harmonies.

Jim & Jesse were radio, TV and touring favorites in the bluegrass/country community for decades —indeed, their partnership was still going strong after 55 years when Jim McReynolds died of cancer on New Year’s Eve in 2002. Jesse decided to carry on as a solo artist, and at the age of 81 today he is still going strong, touring regularly with a hot band that includes three of his grandchildren and still putting out vital new music—like Songs of the Grateful Dead.

Indeed, when I catch up with Jesse in early October, he’s in a motel in Columbia, Mississippi, where he and his group are playing a festival. Naturally, my first question is about whether he’s playing some of the Dead/Garcia material with his band. “Oh, yeah!” he says enthusiastically. “We do ‘Black Muddy River’ and ‘Deep Elem Blues’ and ‘Day By Day,’ which is the new song on the album I wrote with Robert Hunter. And we’ve been working on ‘Ripple’ and a couple of others. I’ve done ‘Ripple’ a couple of times with David Nelson—he came to Nashville and worked the Grand Ole Opry with me."

Do your audiences know those tunes? “They sure seem to. I did ‘Black Muddy River’ and ‘Deep Elem Blues’ at the Philadelphia Folk Festival and they went over great. It felt like we’d been doing them all my life.

“I’ve been surprised at the young people who are coming onto the Grateful Dead thing I’m doing,” Jesse continues. “When I played the Grand Ole Opry, which is a different audience altogether, when I first mentioned that I was going to do a Grateful Dead tribute CD people sort of looked at each other kind of funny, like I was kidding or something. But then when I did [“Black Muddy River”] I got a standing ovation, which is unusual for the Grand Ole Opry. It’s going over good—especially ‘Black Muddy River.’ I get more requests for that than anything I’ve done—even from more devoted bluegrass fans.”

It was Sandy Rothman who, in 2004, first told McReynolds and his wife Joy about Garcia’s affection for his music and planted the seed about recording an album of Garcia’s songs.

Jesse says he had heard some of the Dead’s music through the years but really came to know it more in recent times through Joy, who was an unabashed fan of the group. “My wife is a Dead Head and she has all the albums and the live performances and all that,” Jesse reflects, “and she’s always playing the Grateful Dead in the car when we travel together and we’d talk about Jerry’s guitar-playing and singing, so I had listened to a lot of it. I knew a lot of the songs, but when it came up as a possible project, I went back and listened more carefully to see which ones might fit my voice the best. ‘Black Muddy River’ was the first one I decided to try and it came off great, and from there we just went down the line and found ‘Ripple’ and ‘Fire on the Mountain’ and the others. We worked patiently on this project for close to five years to make sure it was done right. It was more that I expected it to be, for sure.”

Jesse, Joy and Sandy all had a hand in selecting songs for the disc, which is definitely not just a bluegrass take on the Dead—you can tell that by the inclusion of such tunes as “Bird Song,” “Alabama Getaway,” “Stella Blue,” “Standing on the Moon,” the aforementioned “Fire on the Mountain” and “The Wheel.” The instrumentation, too, often veers away from bluegrass and acoustic country: David Nelson and Stu Allen add electric guitar to some tracks, Tommy White lays down some tasteful steel guitar licks, there are drums throughout (by Shawn Apple except on one track) and some electric keys courtesy of multi-instrumentalist, album co-producer and recording engineer Steve Thomas. The album was recorded at Gaintrain Studios in Hendersonville, Tennessee (just northeast of Nashville). Other musicians include Rothman on banjo on “Deep Elem Blues” (the one tune not co-written by Robert Hunter), Randy Brown on bass, Buck White on piano on one tune, and Garrett and Amanda McReynolds on harmony vocals. Nelson sings lead on “Ripple” and “The Wheel,” Allen on “Deal,” so the designation of this album as being by “Jesse McReynolds & Friends” is quite apt, even though it’s still clearly Jesse’s show.

Jesse’s voice is perfect for much of this material and the way that Stu Allen adds a touch of “Garcia” to many songs, and the blend between his and Nelson’s guitars and Jesse’s always evocative mandolin makes for a compelling instrumental bed on most tunes. My own favorites are mostly the ballads: the stunning “Black Muddy River,” “Standing on the Moon,” “Stella Blue” (the latter two benefitting from tasty steel work) and “Bird Song,” along with a special tip o’ the hat to “Deep Elem Blues” and “Loser.”

As for the collaboration between Hunter and McReynolds, “Day By Day,” “I got to be acquainted with Robert through Sandy Rothman,” Jesse says. “I contacted him by email and talked to him by phone. He sent me the lyrics and then I put the music to it. He sent me three or four songs, and ‘Day By Day’ was the first one I worked on with my band. I’d love to work with him on some others.”

For more information about Jesse McReynolds’ upcoming schedule, check out jimandjesse.com for the latest. One date Northern California folks might want to circle on their calendar, however, is December 4, when Peter Rowan; a group fronted by Jesse that will include members of Rowan's band, Jesse's grandson Garrett and others; the David Nelson Band, and more will be will be playing a Rex Foundation benefit called “The Wheel: A Musical Celebration of Jerry Garcia” at the Fillmore in San Francisco. 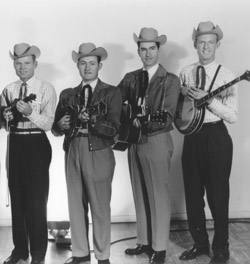 The show Jesse puts on is always rich in music history: “I did 50-some albums with my brother as Jim & Jesse and I get some of the tunes from there; the most popular ones we recorded.” he says. “And I’ve done three or four projects on my own since Jim passed away, including this new one. I write a lot of instrumental arrangements, too. I’ll do old things like ‘El Comanchero’ and ‘Never on Sunday’ and a variety of things."

Asked if age has slowed him down much, Jesse quickly replies, “Not so far, no. I’m still getting along. I have a physical every year; in fact I had one a couple of weeks ago and everything is looking great. I’ve been lucky and my health has held up. I keep doing what I love to do and I practice as much now as I did when I was younger. I just love music and that’s my life.

“And this new record has opened up a new chapter in my musical career,” he adds. “This project has got me more excited than anything I’ve done in 20 years.”

For more info and to order go to woodstockrecords.com.

.... his version of Black Muddy River is really special.

I've been listening to the

I've been listening to the CD non-stop since it arrived a few days ago. It's really wonderful. The Deep Elem is out of this world!

The CD has had many plays since received Nov 2. The blend of vocals and instrumentation is amazing. I was choked up more than once on the first few passes. I feel like I should send in more $$!

This is quite happenin ' . thanks for sharing ....... McReynolds really does a heralthy dose of Garcia Hunter compositions . Ive been away from the US for almost 11 years , and Id love to see an outdoor or indoor folk festival . I lived in iowa for a total of 16 years , and i sure do miss that place .......

is a Rex Foundation benefit at the Fillmore featuring Jesse McReynolds and his band. Not to mention Peter Rowan and David Nelson and THEIR bands, all doing musical tributes to Jer. Details here.

I wish they were playing the Fillmore closer to New Years, I would just LOVE to go see this!! Don't think I can swing hanging in SF for an entire month! ;) "It's got no signs or dividing line and very few rules to guide"

This CD is soooooo awesome!!!

'Nuff said! "It's got no signs or dividing line and very few rules to guide"

Great Job Jesse! Can't wait to see you perform at The Whippoorwill Gallatin in January.
10 comments
sort by
Recent
Recent Oldest A to Z Z to A
Reset
Items displayed