home > features > Hornsby and Weir: Together Again (For the First Time)! 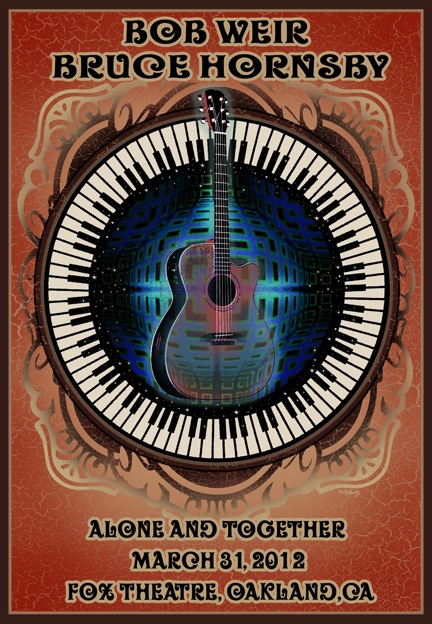 Hornsby has a long history of playing solo gigs, but it’s a recent development for Bob, whose previous acoustic outings usually included bassist Rob Wasserman and, in Scaring the Children, drummer Jay Lane.

This was my first time going to a reserved-seat show at the Fox (for most concerts, the terraced areas downstairs are general admission, though there have been numerous shows with reserved seats, too), and I was impressed with how comfortable the wide, cushioned seats were. It felt a lot like a concert at the nearby art deco Paramount Theatre or the old Warfield Theatre in SF before they ripped out the seats downstairs.

The evening opened with a 50-minute set by Hornsby, commandeering a beautiful Steinway grand center stage. He wasted no time establishing what his own M.O. was going to be—lots of playful improvisation and musical quotations from other composers in and around a creatively chosen selection of his tunes, new and old. For instance, he opened with a song he’s written for the forthcoming Spike Lee film, Red Hook Summer, went into “Sticks & Stones,” a topical tune that could be considered an anti-bullying anthem from his 2002 album Big Swing Face, and also wandered into part of a piece by the great centenarian American composer Eliott Carter (a favorite of Weir’s). Another number, Bruce informed us after the fact, had gone into something by Charles Ives (one of Phil Lesh’s favorite composers).

Every intro and every solo became an excuse for Bruce to play with structure, tempo, rhythm and attack—he was clearly reveling in his seemingly unlimited options, a grin on his face much of the time, his eyes darting back and forth from left hand to right as if he was observing and marveling at their manic dance. At times his two hands appeared to be conversing with each other but on completely different musical paths. Abrupt, arrhythmic, single-note stabs in random spots on the keyboard gave way to more methodical rolling bass figures; dissonant lines sometimes resolved in bright melodic riffs. His immense wingspan enveloped the 88 keys, and occasionally he lifted off his bench to better pound home a musical point. It’s easy to forget that early in his career he had actual Top 40 hits, because on a night like this, playing for what he knew was an open and receptive audience, he was following his muse to many decidedly non-commercial realms, even for one as adventurous as he often is.

Other songs in Bruce’s set included his dark portrait of an entitled creep, “Heir Gordon” (“Got a lot of money but he ain’t worth a damn”), from his 2004 record, Halcyon Days; his lovely song of young and old love and emotional geology, “Continents Drift” (from 2009’s Levitate); the popular “Preacher in the Ring” (Spirit Trail, 1998); Jimmy Martin’s mid-’50s bluegrass number “20/20 Vision” (“and I’m walkin’ around blind”); and the twisted, unrecorded song “Where’s the Bat?,” from an unusual musical called SCKBSTD (Sick Bastard) for which he’s written music and lyrics. He played his 1988 Scenes From the Southside hit “Valley Road” in what he termed Grateful Dead-style—as a shuffling kin of “Truckin’,” perhaps—but even that went out to left field in parts, as did his set-closing “A Night on the Town” (from the 1999 album of that name).

After about a five-minute break (during which the house lights stayed down), Bob sauntered out onstage with his Alvarez-Yairi amplified acoustic guitar, pulled up a high stool that he leaned against but didn’t really sit on, and launched into the recently revived “My Brother Esau,” one of the highlights of his TRI webcast with The National on March 25. A solid take of “The Music Never Stopped” (complete with effective backing “Oo-oos” from the crowd) let Bob engage in some stirring rhythmic guitar work as he chopped out the song’s crisp beat, and that then eased into the old folk-blues “K.C. Moan.” A couple of songs later, Weir’s own “Big Bad Blues” put a more contemporary spin on the genre; it worked nicely as a solo tune. Also very effective in this setting were the mid-set selections “Ashes & Glass,” Lowell George’s “Easy to Slip” (a highlight of BW sets for decades now) and a powerful “Black-Throated Wind.” Other tunes included “When I Paint My Masterpiece,” a lovely, calming “Peggy-O,” “Cassidy” and the rockin’ set closer, “Sugar Magnolia.”

Bruce and Bob work it out at the Fox Theatre in Oakland.
Photo: David W. Clark ©2012

A couple of minutes later—again, there was no real break—Bob and Bruce returned to the stage, with Bob picking up a big, hollow-body electric Gibson this time. The duo’s 45-minute set started with a rollicking reading of Chuck Berry’s light-hearted 1956 smash, “Too Much Monkey Business,” Bob and Bruce deftly intermingling their parts, Bruce ever the prankster looking for the unconventional in even the simplest song. Dylan’s “Most of the Time” (another winner on the TRI webcast) was spare and beautiful, with Bruce supplying lacey ornamentation around Bob’s soft but intense lead vocal.

Bruce has performed “Lady with a Fan” off and on since Jerry died, but here he and Bob traded verses effectively and the jam that followed meandered in all sorts of interesting directions—including deep space—before finally settling into the groove of “Dark Star.” They sang just the first verse before spinning off toward other nebulae and eventually coming around to the charging rhythm of “The Other One.” After a verse, that, too, gradually evaporated and the short jam that followed sort of dwindled down, Bob walked over to the Bruce and said something, then returned to the mike and started “Me and My Uncle,” which ended the set on a nice up-note. “Hell in a Bucket” was an unexpected encore choice, but as with every other tune the pair played, it proved to be a springboard for intriguing and inventive collaboration, this one stretching to about 11 minutes.

All in all, the evening was a rousing success—two highly idiosyncratic musicians showing what makes each of them unique, then forging their personalities together to create a highly satisfying new fusion.

(Night Two of Bob and Bruce at the Fox was also very well-received. Bruce’s set included favorites such as “Talk of the Town,” “The Way It Is,” “Mandolin Rain” and “King of the Hill,” along with a new song he’s written with Robert Hunter. Bob’s solo set opened with Elvis’ “Jailhouse Rock” (sans hip swings I presume) and then moved on to “Loose Lucy,” “Lost Sailor” > “Saint of Circumstance,” “Victim of the Crime,” “Money for Gasoline,” “A Hard Rain’s A-Gonna Fall,” “Two Djinn,” “Days Between” and “Not Fade Away.” The joint set (no pun intended) started with a “Not Fade Away” reprise, followed by “Sugaree,” “Looks Like Rain,” “Mexicali Blues,” “Standing on the Moon,” which went off into “Dark Star” (verse two) and finally a “Jack Straw” finisher. Encore was “Ripple.”)

Bob will be playing a lot of acoustic music this spring. Three days after Furthur’s tour ends on April 21, he begins a series of six solo shows on the East Coast, followed in late May and early June by eight shows featuring the Bob Weir-Chris Robinson-Jackie Greene Trio. At the Gathering of the Vibes in Bridgeport, CT, in July, Bob and Bruce will reunite with an added guest—saxophonist Branford Marsalis. That’s sure to be amazing! (Phil & Friends, the Mickey Hart Band and Bill Kreutzmann’s 7 Walkers are also appearing at GOTV.)

For details about Bob’s upcoming shows and ticket info, check out his website.

I have to admit I was sorry I was out of town for this one...

really nice poster. Who's the artist?

any hope for a SBD release?

I couldnt make it to the show, but i sure would love to buy the soundboards if they decide to release them. anyone hear anything on that note?

...about that, GratefulDeadhead. Audience recordings are starting to trickle out, however, so at least we can hear the shows...

i have never lived on the west coast/bay area, and i'm ok with that. back in the day, when i needed a fix of shows, there was always a city with a 2-4 show run not too far away, or even a tour here or there, so not living out west wasn't a big deal. but what would have gotten me to the bay area were all the cool little things, like this. bobby playing with ramblin jack, the other rex things, etc. this hornsby-weir thing is a what makes me jealous of you guys!!!!

Check out Youtube for these shows; very watchable clips.
6 comments
sort by
Recent
Recent Oldest A to Z Z to A
Reset
Items displayed