home > features > Skulls and Indians and Choppers, Oh My! A Profile of Spring '90 Artist Wes Lang 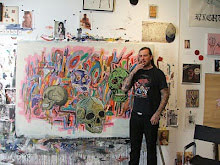 The original artwork gracing the cover of the new Spring 1990 box, and others spread throughout the beautiful and informative book included in the package, are the work of a Brooklyn-based artist named Wes Lang. The images range from rapier-wielding and chopper-riding skeletons, to rough-hewn variants on familiar Dead iconography, girls and whimsical treatments of song titles and lyric fragments. His work combines a loose “fan art” approach with a skilled draftsman’s eye for detail, and the emotional underpinnings of his art—grim to light—speak to his influences, from biker and tattoo art, masters of ’60s San Francisco rock posters and artists such as Jean-Michel Basquiat and Francis Bacon.

Working on the box was a dream-come-true for Lang, who has been a devoted Dead Head since one of the teachers in his Chatham, New Jersey high school, Mark Laichtman, took him to his first show at Long Island’s Nassau Coliseum on March 30, 1990—coincidentally, one of the shows selected for this box. “That was it,” he says. “I kept a little book with all my ticket stubs and set lists and stuff, and as far as I can tell, I saw them 74 times in the stretch from ’90 until Jerry passed. I saw them up and down the East Coast, out West. I was there for the ‘Here Comes Sunshine’ [revival] at Compton Terrace [in 1992]. I saw ’em in Oakland.”

Although Wes describes his picturesque New Jersey hometown, half an hour west of Manhattan, as "an extremely heavy Dead town,” he didn’t discover them early on. “My father owned a used record store when I was growing up and he’s super into jazz,” he relates, “so I grew up going to a lot of jazz shows with him; we’d go into [NYC] all the time. So,of course I went the opposite direction with my musical tastes, and as soon as I was allowed to pick things, it was punk stuff. I was into the Misfits, Bad Brains, The Cramps—the other side of music. I was also way into skateboarding and all that.” But he wasn’t only into punk—his teacher also took him to see Rush and Deep Purple, among other groups.
Asked whether getting into the Dead and the surrounding hippie scene conflicted with his punkish lifestyle, he laughs and says, “Oh, yeah. I definitely had a shift in consciousness. To be honest, I got sick of being pissed off all the time. I went from being angry and getting into fights and being nuts to, well, when I got into the Dead, everything kind of calmed down for me. I got into reading the Carlos Castaneda books [the famous “Don Juan” series about a man’s psychedelic encounters with a mystical shaman], and I got into Ram Dass and reading other things, and my brain just kind of shifted—it changed me.”

He started drawing when he was young, but it didn’t occur to him then that he could make a living from art. In fact, he says, “When I was about 24, I had a sign painting business—hand-lettered signs—but again, something shifted in me, and then I really pursued how to become a professional artist. Within a few years, I started having shows in New York City, and it has been great since then." He says he nearly always creates his art listening to Dead music; another favorite is the Memphis country-punk band Lucero.

It was a pencil version of the skull in an Indian headdress that initially caught the attention of the folks at Rhino. “I had done one that was kind of similar to this in 2010,” Wes says, “and they were really attracted to that piece. The [fall ’90] Europe tour [program and posters, designed by Rick Griffin] had the Indians with headdresses driving motorcycles, which I used as a spring board. I ended up doing a much more insane, updated version of that Indian. The first one has kind of become an icon of mine, so I decided to push it even further and smash it together with this Dead project.”

Many of his other images that were ultimately used in the box come from different parts of a large sheet he worked on over a period of time after officially landing the gig. “That’s sort of how I work,” he says. “I do these big drawings that have a ton of different images all over the place, so what we did was, working with Steve Vance, the designer, he was given a giant resolution file of the whole piece and then he dissected it and took parts of it and used them as the artwork for the whole set. There’s a small foldout poster of the entire piece that’s going to be included [in the box].”

Wes Lang is one busy dude these days. He has a show running at Melet Mercantile in Montauk, Long Island (where he was vacationing when we spoke), through August 15. There are Rolex watches that incorporate some of his designs being hand-engraved in London for release this fall, and a show in Paris in December “that I haven’t started yet,” he says with a chuckle.

He usually has many works in progress at once. “I have a very large studio, so in half of it hang big pieces of paper, and the other half I have giant canvases. I go back and forth between the two at all times. I don’t focus on one or the other. Sometimes my canvases are extremely detailed, sometimes they’re really sloppy. I don’t like getting stuck in one kind of thing all the time. But I talk about the same things all the time [in my art]—with the skulls and the girls and reapers and Indians and the text full of positive messages about living life to the fullest. But I handle it in a thousand different ways, so that keeps me interested.”

Last question: What’s your current motorcycle of choice? “I have 2003 Harley Dyna. I’ve had many bikes. Older Harleys, but I got too busy to deal with the maintenance, so I sold all of them and took a Dyna and upgraded it with sport-bike suspension and brakes and this and that, so it’s super-functional and always works. I’m turning 40 in September, so my present for myself is to ride my Harley from New York to Los Angeles, and a bunch of my friends are going to fly out and meet me in L.A. for my birthday. It’s gonna be great!”

Learn more about Wes at http://Weslang.blogspot.com.

as far as getting to create the cover for S90, in the immortal and envious words of Napoleon Dynamite, "Lucky." It's got excellent psychedelic detail.

I love the Grateful Dead, I was on tour Spring of 1990.
2 comments
sort by
Recent
Recent Oldest A to Z Z to A
Reset
Items displayed