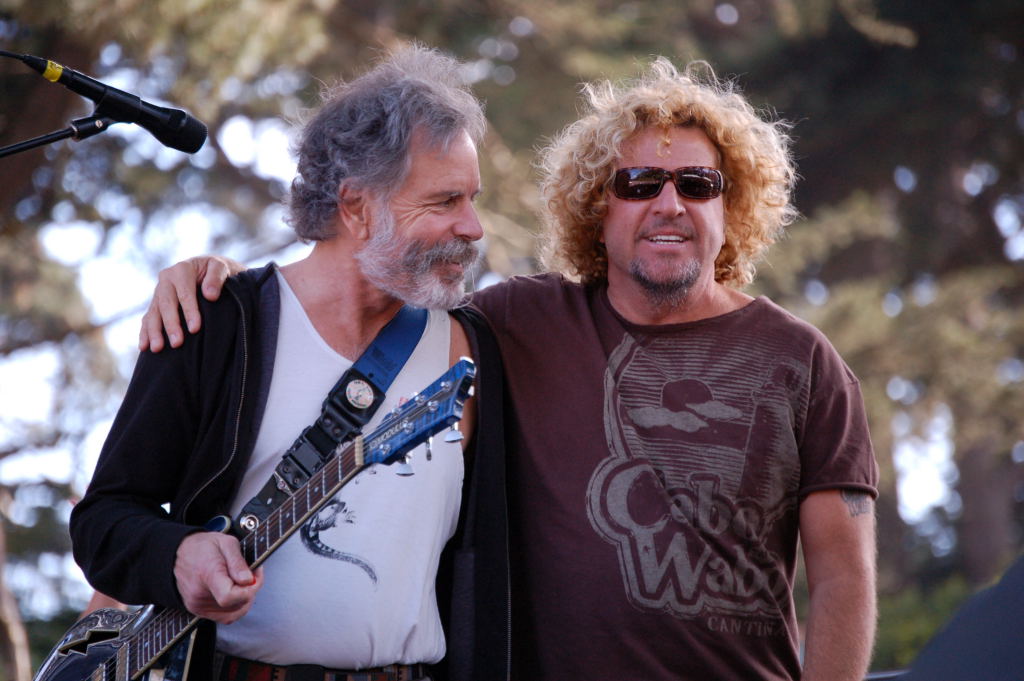 Bob Weir and RatDog, already on one hell of a roll, continued to build momentum, make new friends and engender mass communal bootay shakin’ on the band’s triumphant late-winter/early spring tour, which found the doggies raising joyous havoc along the West Coast in February, and then doing likewise, only more so, in the Northeast and South through most of March. The tour featured some welcome additions to the band’s repertoire, pleasant surprises in the guest appearance department and performances that made it easy to understand why RatDog’s audience has been growing ever larger and more enthusiastic over the past few years.

It’s hard to single out high points in a tour so jammed with goodies, but a good place to start might be the glorious homecoming show on Valentine’s Day at The Fillmore in San Francisco, which featured one especially audacious (and appropriate) song choice: a swoonworthy rendition of the great Rodgers & Hart standard “My Funny Valentine,” crooned by Bobby as he prowled the stage apron with a hand-held microphone. Then there was the whole show in Vancouver, which some longtime followers of the band placed high on the list of best RatDog performances ever. The Eastern swing peaked with a spectacular three-night stand, sold out for months in advance, at New York’s Beacon Theater. Among the highlights: A potent guest shot (on “Milestones” and “Turn On Your Lovelight”) by the legendary soul/R&B/jazz bass player Jerry Jemmott (possessor of a truly staggering session discography that includes many of the greatest records by Aretha Franklin, Wilson Pickett, King Curtis, B.B. King and others too numerous to mention); dear friend Donna Jean Godchaux Mackay lending her unmistakable sweet harmonies to “Friend of the Devil,” “Cassidy” and other favorites; and instrumental reinforcements by such mainstays of the NYC scene as DJ Logic, Tom Pope, Chuck MacKinnon and Dred Scott. And then there was the wonderfully played bit of musical pranksterism that Bobby devised for the Beacon run: On each of the three nights, the band played “Stagger Lee.” No, not the same song three times, but three different takes on the classic American folk legend, in the chronological order of their composition. On opening night, it was Mississippi John Hurt’s immortal country blues version; in the middle spot was the 1959 R&B hit by Lloyd Price; and to close things out, the Jerry Garcia/Robert Hunter revisionist, Delia DeLyon-empowering retelling of the tale from 1978. It was, all agreed, three halves of a hoot. 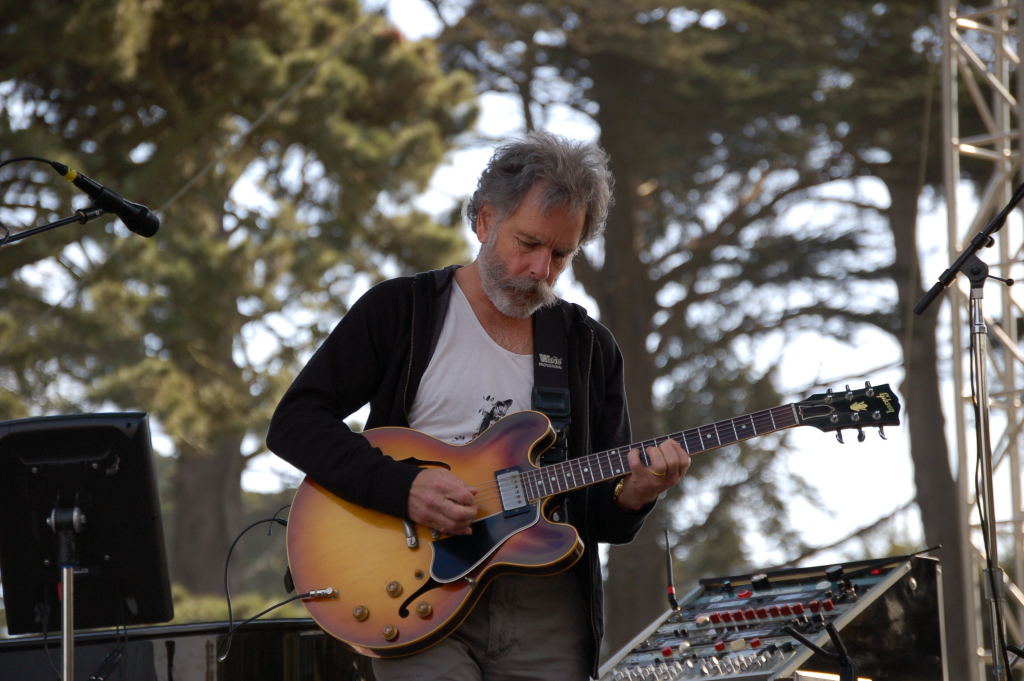 If you missed out on the tour (or were along for the ride and want to revisit your own fave moments), get thee to www.ratdoglive.com and peruse the selection of high-quality soundboard recordings mixed by the band’s audio wizard, Mike McGinn.

After the tour was over, the band returned home for another San Francisco date, this time as part of the annual Green Apple Music and Arts Festival, a multi-city celebration of Earth Day. RatDog headlined the biggest of the Bay Area festival events, a free show at Speedway Meadow in Golden Gate Park, on a terrific bill that also included Stephen and Damien Marley, The Greyboy Allstars, Martin Sexton and Jonah Smith. Sammy Hagar joined the fun with RatDog on “Loose Lucy.” And hey… was that Bobby’s beloved old Gibson ES-335 guitar (a mainstay of the Grateful Dead’s Wall of Sound era, but very seldom seen onstage since), making a rare appearance for part of the set? Why yes, we believe it was!

The Green Apple weekend wound up being something of a mini-fest for RatDog’s extended musical family as well, as the days preceding the big bash featured club shows by Mark Karan’s band, Jemimah Puddleduck, and Alphabet Soup, the hip-hop/jazz/funk unit featuring Kenny Brooks, Jay Lane and Jeff Chimenti.

There was one more local chore before the guys took a well-deserved pre-summer-tour break: An appearance on Late Night With Conan O’Brien, on the penultimate night of Conan’s week of shows taped at San Francisco’s venerable Orpheum Theatre. The band played a compact (four minutes!) version of “Jack Straw” (with Bobby on that 335 again). Alas, there was no meeting of the canine minds between RatDog and Triumph, the Insult Comic Dog.

On the not-too-distant horizon: A very busy summer, of course! Several choice festival dates (including Bonnaroo in Tennessee, 10,000 Lakes in Minnesota, All Good in West Virginia and the Gathering of the Vibes in Connecticut; plus a bunch of dates with Keller Williams, another with the Allman Brothers Band and more. We’ll be catching up with Bobby and the other ’dogs along the way to get their impressions, musings and unhinged observations, and will pass them on right here. Stay tuned!

And be sure to pay a visit to the band’s official site as well: www.rat-dog.com

Nice!Saw 2/14, (((My Funny Valentine)))! Then flew up to Seattle where there was an awesome Ratdog Wharf Rat which included a bagpiper playing along! A definate must hear!. On to Vancouver- great string of shows!

I had the pleasure of seeing the dog in my home town of Erie, Pa. The show was awesome to say the least. The crowd could have been bigger, but very enthusiastic. I hope they will overlook the small turnout and give us another chance. I think Bob is great, and was a very big part in the dead's success. Thanks for all the GoodTimes, and please keep them comming.

I saw them in Kalamazoo at the State. They ripped!

I have seen Ratdog at the Further festival, Tempe,AZ amphitheater and Dodge Theater Phoenix AZ last year. The band is getting better all the time and the show was powerful this time. I might add that on the bill was the String Cheese Incident which blew my mind!!

I saw Ratdog and Phil Lesh

I saw Ratdog and Phil Lesh and friends at the Zoo in OKC a few years ago. Would like to see that combo again!!!!

See ya in San Diego!

Ya, Ratdog is everywhere but the Bay Area - Home of the Dead? CAF

RatDog has quickly become my favorite touring act! Unfortunately I was very sick during their Earth Day show so I couldn't make it up from Los Angeles as planned, but I caught 'em a few moons ago in Ventura and Anaheim, and I'll be in aural bliss once again at the Greek theater this summer. Keep up the great work. Oh and nice new site here on dead.net, much improved! =]

looking forward to seeing them with the brothers at burgettstown, pait will be my first ratdog show ever! i'm excited at the prospect of hearing newer takes on some gd classics. just keep truckin onnnnnnnnn! bobby!

Any word as to when Sirius radio will begin the 24-7 Grateful Dead station? As soon as I heard this was happening, I went out and purchased Sirius radio. I wish I had done it sooner--oh well. But when the heck is the Dead Station starting?? There's a 24-7 Elvis station, which is cool, but I'm waiting for The Dead!!

what a great time. sound was was a all-time crystal clear event. i'll greatful for the invite to attend

I saw ratdog a few times now in Milwaukee, and in Madison. I would love to see them again, in Madison, WI my hometown. I thought they had a great showing at the last one, and they blew the doors off the Orpheum Theatre. Mayby two shows at the Barrymore Theatre in Madtown this fall?? Pleeeeeeeesssee???

I have to give credit where credit is due, my fiance is the one who came up with most of this, here it goes. So, we know that festie shows have to appease everybody but the bonnaroo set this year was just horrable, and most of our deadhead friends aggreed. The thing that cracks us up though is the reluctance of die hard ratdog fans to admit that Bobby plays a bad show time to time. Just an observation.

Kimock Rocks!!! It took him a few songs to feel comfortable but after that he started to gel with the rest of the band. IMHO one of the best Sugar Magnolias I've ever heard!! Kimock will teach an old dog new tricks.

I was also at the Erie show a few yers back . I don't think will see Ratdog that far north in PA, except for the few minutes along rt 90 in between Cleveland and Buffalo. Make the trip to Pittsburgh to see them! Gotta love this band. Keep it up Bobby!

I've seen RatDog in Rochester, NY, Canandagua, NY, Erie, Pa, Geneva, NY twice, and going again to see them at Darien Lake PAC on 8/19 They are opening for The Allman Brothers Band. Hopefully will see Bobby on stage with Greg, Warren and Derek... Would definatly make my summer... Keep Jammin Bobby!!!

I saw ratdog sit in with and open for ekoostic hooka a few years ago.I liked it a lot.

that was a great Hookahville. Ratdog and Arlo Guthhrie! The Lost Sailor>Saint of Cir...that Bobby sat in with Hookah is sick and is availiable for download on archive.org under EH's section. PS...Party starts this weekend, get ready to rage! And Bobby, how about a crazy fingers?

Hey Ratdog and Allman Brothers at the Tweeter Center in Camden NJ this Friday night August 17th. I can't wait!! Seen Ratdog many times and they always rock out!! Ten months since I lost my sister Patty and its gonna be my first show without her :(