After a pleasant preshow reception at which folks socialized, noshed delicious finger foods, sipped fine wines and bid on an impressive array of silent auction items in the upstairs poster room, the musical portion of the evening started with a wonderful, easy-going set by three-fourths of the eclectic Bay Area rock/jam band ALO—guitarist/singer Lebo (Dan Lebowitz), bassist/singer Steve Adams and drummer/singer Dave Brogan (on conga)—joined for the occasion by the striking singer Lesley Grant. Each of the four distinctive vocalists got to shine on a tune—Lebo on “I Want to Feel It” (from the 2010 ALO album, Man of the World), Brogan on “Easy” (from his 2008 solo disc, Thunderbird Sun Transformation), Adams on “Falling Dominoes” (from ALO’s 2012 Sounds Like This) and Grant, who is a member of the SF R&B/soul group London Street, on a fine new Lebo tune called “Listen to the River.” Then they traded verses on a stunning version of “Wild Horses,” which really brought down the house. Their chemistry was palpable, and I was really impressed by Lebo’s guitar work, which sounded almost like a combination of Garcia and George Benson but was still completely original.

Next came the first surprise of the evening—Bob Weir was called out to the stage and, acoustic guitar at the ready, joined the quartet for their last three songs: “Me and My Uncle,” an excellent rendition of the relatively obscure Bill Withers soul-funk tune “Grandma’s Hands” (which Bob had never played before, Lebo says), and, finally, a reggae-fied but still spacy “Dark Star.” Bob and Lebo sounded fantastic together, with Bob chopping hard rhythmic accents and assertive lines as Lebo soared above him imaginatively. In just one set I became an ALO convert, and I look forward to seeing them when they headline the Fillmore on Feb. 22 and 23, 2013. Good vibes, good stuff!

After a break, Bob returned to the stage alone with his acoustic guitar for a short set that opened with a powerfully strummed and confident “Loose Lucy” and also included “Playing in the Band,” complete with a fairly out-there jam; a lovely “Peggy-O”; and, perhaps best of all, a spellbinding “Black Throated Wind.” Bob has been playing solo acoustic a lot this year and his confidence has grown substantially the more he’s played in that format. He looked and sounded terrific at the Fillmore. (Bob and Jackie Greene are embarking on a Western acoustic tour this week. For more info, go to Bob’s website.)

The evening’s final act actually started in the Fillmore lobby. The boom, crack and clatter of percussion erupted from one of the doorways leading onto the main floor and quickly revealed a foursome of dancing and drumming young men in bright multicolored African garb, snaking their way to the stage through what was now a wildly dancing crowd. This, we learned later, was the African Showboyz—four Ghanaian brothers who play traditional music on handmade drums, shakers and, in one case, a small, unusual stringed instrument. They settled in a spot near the back of the stage, where they sang and chanted and drummed, then took turns moving to the front for acrobatic spinning and jumping moves that had everyone in the place cheering. 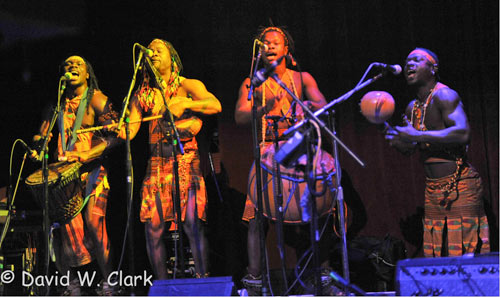 The African Showboyz from Ghana doing their thing at the Rex benefit. Photo: David W. Clark © 2012

The dance party moved into an even higher gear with the arrival of the eight-strong Mickey Hart Band. Mickey steered the Showboyz’ insistent African beat into more familiar territory—the driving groove of “Samson and Delilah,” which the band’s gifted and soulful lead singer, Crystal Monee Hall, delivered with unbridled character and authority, fully embodying every single line of the old Gospel tale. Amazing!

I’ve seen this group a lot this year, and they never fail to wow me and exceed my expectations. Their grooves are fluid and expansive, their original songs—some featuring words by Robert Hunter—are memorable and filled with bright hooks, and their interpretations of songs from the Grateful Dead repertoire are full of spirit and originality. They are truly a band for the head, heart and feet.

Two of my favorite MHB originals were among the many highlights of their set—“Cut the Deck,” well-sung by the group’s newest member, the appealing Joe Begale, and the hypnotic and thoroughly psychedelic “Time Never Ends.” This was my first time hearing “Falling Stars,” a recent original filled with mystery and sonic magic (Crystal’s vocal was electronically processed and beautifully strange). The band also debuted a moving new song: “Jersey Shore,” written by Mickey as an ode to the area most devastated by Superstorm Sandy, and sung by Crystal. It is as close to a conventional pop tune as this band has produced, and would no doubt be a soothing balm to folks in that area. 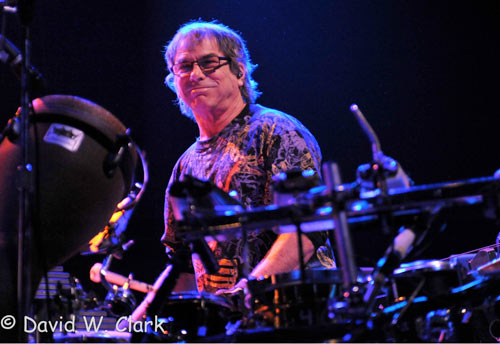 Bob reappeared with an electric guitar to lead Mickey’s ensemble through excellent versions of “China Cat Sunflower” and “I Know You Rider” (he and the MHB’s extraordinary guitarist, Gawain Mathews, meshed very well) and later, sans Weir, but with the Showboyz again in the groove, the group rocked the house with a bubbling “Franklin’s Tower.” Kudos, as always, to the MHB’s phenomenal rhythm section—Mickey, bassist Dave Schools, talking drum master Sikiru Adepoju and traps drummer Inkx Herman—as well as keyboardist/band director Ben Yonas.

The encore was a slow and sweet “Brokedown Palace”—a love note to the departed (Jon McIntire!) and also those who remain; just the right end-note for this Rex event. As we drifted out onto Geary Boulevard, the rain had stopped and the skies had cleared. Perfect.

What was the Hunter tune about "some of your love'?

The chorus, according to the Grateful Lyric and Song Finder site is: I built your house And laid your floor I carried your flag And I fought your war I swear by the toes Of the Jones above All I ever wanted was Some of your love Just some of your love I never heard that word as "Jones," but I suppose that must be right... At any rate, a great song

hoping history repeats itself and this eventually comes out as a CD/download.

Cut the Deck and American Spring

Thanks for the recap Blair, and great pictures from Dave!!! Interesting fact: the Hunter-Hartr song "Cut The Deck" shares some lyrics with the Hunter-John Kadlecik song "American Spring" from the album by "The Mix". John performed this song at the 2011 Rex show. (~);} brian

that was ALSO a great show. I love the nice, relaxed vibe at Rex shows. Leads to some great moments.

Was fortunate to see MHB in Napa on 11/29. Absolutely stunning show from beginning (the African Showboyz into Samson) to end (encore was a version of White Room that made Cream's seem tame). Thank you for a real good time!!!

Cream's "White Room"? There's something I'd like to see...

Check it out here

Mickeys got something for you...

I absolutely love hearing all the various versions of songs we all love, done by the folks that wrote and played them. Thank you!

This just in: The video!

With highlights from the show.
10 comments
sort by
Recent
Recent Oldest A to Z Z to A
Reset
Items displayed