So far this column has introduced several of the major series, or sections, of the Grateful Dead Archive; today’s entry focuses on one of the Archive’s major supporting collections, the Jerry Garcia Memorial Collection. Assembled on August 13, 1995, the collection consists of more than 3,100 items that fans brought to the celebration of Garcia’s life held that day in San Francisco’s Golden Gate Park. It includes poems, letters, art, and all manner of artifacts, making it the most eclectic and variegated of the collections comprising the Grateful Dead Archive. Both the contents of the collection and the story of its creation are remarkable, and its fundamental nature as a Deadhead memorial makes it the most colorful and compelling document of the band-fan bond that formed the heart of the Grateful Dead phenomenon.

The celebration that Sunday lasted from mid morning to late afternoon. A New Orleans-style parade started the proceedings, followed by speeches from band members, family, and friends, and an afternoon-long musical program chosen by Vault Archivist Dick Latvala and Grateful Dead Hour host David Gans. The centerpiece of the day, however, was what Deadheads did: create a magnificent shrine to the beloved musician. Assembled on a section of the bleachers next to the Polo Fields, the altar, as it was dubbed, featured a giant portrait of Garcia in the center, with row after row of fan tributes around and below. Dozens of volunteers and Bill Graham Presents staffers helped ferry treasures from the field to the bleachers, creating a spectacular memorial to the fallen musician.

It was a remarkable sight, a spontaneous, communal gesture that was a physical manifestation of fans’ affection for Garcia, and a tribute to what he meant to so many people for so many years. As David Gans commented afterwards, “Most of the people who loved Jerry Garcia never met him, but they felt intimate with him just the same.” The offerings placed on the bleachers that day expressed that intimacy.

After the memorial, the artifacts were carefully packed away and eventually transferred to Trixie Garcia, who cared for the collection for many years. When the Dead donated their archive to UC Santa Cruz, the University Library there emerged as the best home for the collection, and Garcia decided to donate the materials in 2008. A fund-raising campaign enabled the Library to complete the work to catalog, preserve and house the collection, making all of its treasures accessible to fans, scholars, and researchers.

Scholars from many disciplines have been studying popular memorials with greater appreciation in recent years, and the Garcia Memorial Collection offers a unique archive for researchers interested in communication theory, material culture, history, and even literary studies—one of the most fascinating aspects of the collection is how it can be read as a text. That text is evocative: Scott Carlson, a volunteer who spent several weeks in the summer of 2013 helping to process the collection, calls it “one huge love letter in thousands of pieces.”

Carlson’s thoughtful assessment also speaks to the essence of the collection. Indeed, of all of the associated collections in the Grateful Dead Archive, the Jerry Garcia Memorial Collection is the one that truly reveals the nature of the Deadhead experience. The core of the Grateful Dead phenomenon was the relationship between band and fan. Outsiders marveled at it, fans and band members pondered it, but everyone recognized the transformative bond of trust, encouragement, and support that, at its best, was the essence of the participatory ritual of shared music-making and community. The Garcia Memorial Collection is an expression of that unique relationship, a profound and powerful expression of Deadhead mourning that reveals how fans showed their love and respect for the fallen musician and their grief at his passing.

The range of materials and media in the collection is remarkable, but equally important is the democratic nature of its assembly: the materials exhibit a broad sweep of Deadhead arts and crafts. As a memorial, the event also attracted a wide range of fans—and a large number (more than 20,000, by most accounts)—making the gifts a fine representation of the scene at the time. As a collective expression of the Deadhead experience, the shrine truly was a reification of the community ethos that defined the Grateful Dead phenomenon.

Most of all, the intensely personal nature of that relationship is writ large in the artifacts comprising the collection. That level of involvement is by no means unique to the Dead phenomenon, but it is absolutely unique in this expression: built around the seamless conveyance of ideals from stage to parking lot, Deadhead crafts—especially as memorial objects—reflect those underlying ideals. In a very real way, then, the memorial built on August 13 is the ultimate symbol of that band-fan relationship, a farewell that distills and embodies the essence—and complexity—of that relationship.

Fans have had several glimpses of the collection already, when selected items have been displayed as part of larger exhibitions of the Archive, including shows at the New-York Historical Society in 2010, the Rock and Roll Hall of Fame in 2012, and three exhibits at the Archive’s exhibition space in McHenry Library, the Brittingham Family Foundation’s Dead Central. The largest display of materials from the collection opens Friday at the Santa Cruz Museum of Art and History, a summer-long exhibition focused on the Memorial Collection that also features hundreds of items from the Archive and associated collections.

Showing the collection is a central part of the charge that UC Santa Cruz pledged to acquit when it accepted the Archive, and it is a pleasure to have worked with these fine museums to show these treasures. That spirit of cooperation and generosity created the collection, and it makes exhibitions like the one at the Santa Cruz Museum of Art and History all the more important. Sharing these gifts is ultimately more than just an apt reflection of the spirit of the Archive as a whole; it as an expression of the ideals of the remarkable community that created the collection.

I attended the Santa Cruz Museum of Art and History exhibition opening on Friday and had a fine time. Fans who might be in town for the upcoming Santa Clara shows, or just visiting the area this summer, can find out more about the exhibition here: http://www.santacruzmah.org/2014/dear-jerry-may-1-august-23-2015/ You can even decorate an envelope and send it in to win a free pass to the exhibit! Details here: http://www.santacruzmah.org/grateful-dead-fanmail-contest/ It's great to be able to share the treasures from the collection with the Museum. Nicholas

I hope to visit the Santa Cruz Exhibit

I woke up to nine messages on my answering machine. Something must be up, I thought.Damn; he's gone, he's gone, and nothing's going to bring him back. I jumped in the car and went to Half Moon Bay and picked up my 14 year old daughter for a planned two week camping trip. We drove to Golden Gate Park and spent the night with other kindred souls. My daughter was not into the Dead at all. The next day, it was so beautiful. I have so many memories and am so glad all of that stuff was kept. I took many great pictures of that with my Nikon and kept going back as more and more showed up. Finally, I turned and left and walked about 50 yards and then told Liz that I needed to go back for just a few more minutes and that if that was okay with her, I would give her $5. Bless her heart and the tears are here right now from her response. "Dad; that's not something you pay for." I went back and took a few more precious photos and spent more time with my friend Jerry. I have an artist friend and she was always short of money and she wasn't a Deadhead at all. I commissioned her to paint a picture of Jerry and if anyone wants to see the loving job she did email me at jefreemcm yahoo.com. It is so fine. I first went to a Grateful Dead show in 1967 and have seen quite a few. I happened to be in Europe and caught 4 fine shows of Europe '72(Bickershaw Festival, Southampton(only with the New Riders), Amsterdam and Rotterdam (last time I saw the Pig.) I once had the great good fortune to take Jerry and Marmaduke and some of the road crew on a tour of Northern New Mexico after the Nov 3, 1971 gig at the Civic Center in Albuquerque. At the Hog Farm later that day, their bus broke down and Jerry broke out his guitar and played with some of the Hog Farm people. Great memories and a thousand more. A lifetime of memories and those of you in the LA area should get to the Skirball Cultural Center as there is a fine fine exhibit on the life of Bill Graham. Mickey Hart played for the major donors a few nights back, but put on your tie-dyes and dig the Uncle Bobo exhibit there until October 11th. Many fine things going on around this exhibit on the Skirball.org calendar. In closing, I shut my eyes and I in Ventura and the sun is going down and it's 1987 and Sugaree is playing sweetly.............

thanks Jefree for sharing

the line "Dad; that's not something you pay for." priceless.

Your work is golden. Loved the exhibit at UCSC. The original lyrics of Pride of Cucamonga are super interesting. Please post them on here sometime. You need to interview Jefree about 1971 New Mexico Grateful Dead. Both Bobby Petersen and Robert Hunter spent a fair amount of time here. As far as the Dead's first New Mexico performance tape I only know of one possible source. Of course it was part of the fall 71 tour FM broadcasts. I understand the Albuquerque 71 broadcast is considered a holy grail of sorts. More Dead Heads should be sharing stories here. If I told you all that went down it would burn off both your ears.
Gallery Photo 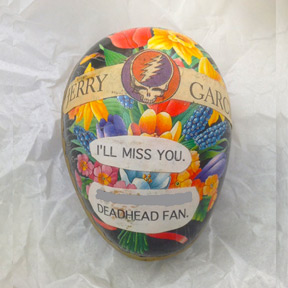 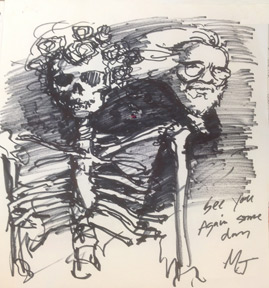 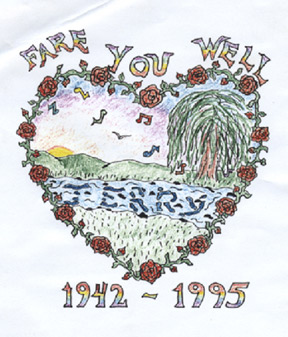 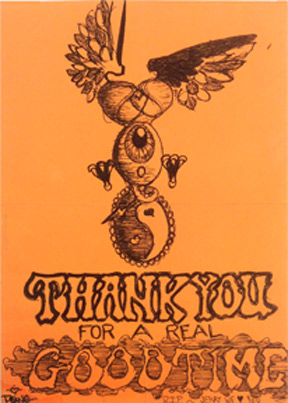 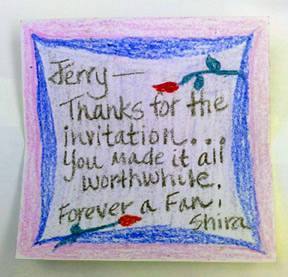