We're shaking things up in movie theaters across the good old U.S. of A. once again! Gather up your favorite Grateful guys and gals and meet us on April 20th at 7 p.m. local time for a celebration of the 40th anniversary of The Grateful Dead Movie. In addition to the feature presentation, we'll be screening an exclusive look at footage from the upcoming Grateful Dead documentary, Long Strange Trip, executive produced by Martin Scorsese and directed by Amir Bar-Lev. We've also got a never-before-seen mini-documentary about the band’s legendary May 8, 1977 show at Cornell University, including new interviews with fans who were in attendance. My, oh, my! Join us, won't you?

This is what they started with back in 2011. No more "new" video in the vault to be streamed? Have gone to every other one since 2012 but will probably skip this. The legendary Oregon show and the European studio set from '72, while short, were the best. What about Giants '89? My first shows. Still hoping they'll be released. ;)

I will be going even though I have seen this many times. Always fun to meet up with other like minded folks.

Looking forward to the mini-documentary about the band’s legendary May 8, 1977 show at Cornell University. Stars are aligning for the upcoming release of my photo book of the same show! Stay tuned for further news. Kickstarter in April! Peace, Larry www.GDBartonHall1977.com

Larry, how many photos do you have?

Rich, I shot three rolls that day, one of the setup and two of the show. I have about 70-80 good shots. Larry www.gdbartonhall1977.com

Sounds good, good luck in the endeavor, it was a memorable night and a milestone in Deadland.

Can anyone buy tickets from Cinemark?

Trying to buy tickets for Delaware show and it's not working also, do we think this is this years Meet Up At The Movies?

No joy in Berkeley either...

Clicked the "7:00" button at Fathom Events for my chosen theater only to be told by Cinemark that there were no showtimes for 4/20. Tried two other theaters with the same result. Anybody on the case to fix this?

rosebody - I have same issue

looks like they haven't made tickets avail anywhere yet

Who's going where? I notice the theater lineup is a bit different hereabouts.

Hi Larry,Nicely done guy. I really enjoyed the photo's and your Facebook page which i liked / following. Looking forward to updates and hearing this show... I can't wait. Vince

Looking forward to seeing another showing / meet & greet as I've been to everyone.Hopefully they will update / add showings in either Racine / Kenosha WI. Vince

Is this really worthwhile?

I just checked to see what seats are left at my local theater. They ALL are! It's a very small theater and all seats are reserved, as these are the large reclining seats. Not one ticket has been sold! I just don't get it. There must be a load of shows that have recorded video. Sure, they are from the 90's, since that's when the concept of large screens at concert venues really kicked in. Still, wouldn't that be a more interesting thing to attend than something we've all seen several times? Many of us have home theaters now that aren't too much smaller than the little boxes in some of the multi-screen complexes. Since most of us own a copy of this film, why bother? I've been to each of these screenings (as well as the three "Fare Thee Well" showings), but I think I'll skip this one. If there was going to be a nearly full house, it could be fun, but it's looking more like a private screening. People seem to be staying away in droves.

What happened to Marin and Sonoma Countines for screenings?

I am surprised once again that NO theaters in Marin or Sonoma Counties just North of SF are offering screenings. I mean, it is only where ALL members of the Dead have lived or still live since forever! :D Not sure I will be making the journey in to the city just for this screening. If it was more local - like at the sweet downtown theater in Fairfax - I would so be in. ;-) And surprised that Terrapin Crossroads doesn't do something like this! I would love to dance to a show with Jerry in the Grate Room!!!

Technical upgrade on the movie for the meetup?

Didn't appear there was any enhancement to the film for the showing, at least compared to the HD treatment given the DVD a few years ago...am I wrong on this?

Saw the movie @ Concord Mills just north of Charlotte, NC. Pretty good turnout w/ lots of fun ppl. The movie was not the same as the disc & several songs were missing. The volume was too low so I talked w/ the manager who refused to address the situation; they had been pretty responsive at the last meet-up. Meh.
Gallery Photo 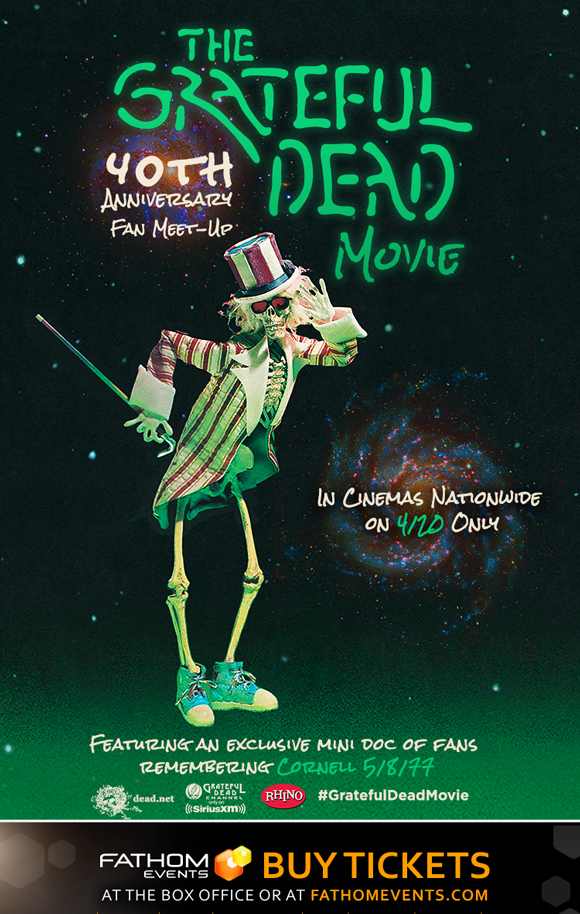