Here’s the plan—each week, I will blog about a different song, focusing, usually, on the lyrics, but also on some other aspects of the song, including its overall impact—a truly subjective thing. Therefore, the best part, I would hope, would not be anything in particular that I might have to say, but rather, the conversation that may happen via the comments over the course of time—and since all the posts will stay up, you can feel free to weigh in any time on any of the songs! With Grateful Dead lyrics, there’s always a new and different take on what they bring up for each listener, it seems. (I’ll consider requests for particular songs—just private message me!)

The sign that had been hanging from the balcony since I started going to see the Dead, with its ever changing number: “___ days since last SF Dark Star” was taken down amid general mayhem and craziness. It had been 1,535 days. I had pretty much figured that I would never ever get to hear “Dark Star” performed live. Probably a lot of us felt the same way. Of course, the rumors had been flying that night—“They’re gonna play ‘Dark Star’!”—but I just plain didn’t believe it. So when the third set opened with the song, it was pure magic. That four-note motif resonates more deeply, to a Deadhead, than the opening four-note motif of Beethoven’s Fifth, promising brand-new, magical musical adventures ahead.

Hit pause, here, for a sec.

OK, I’m back. Just went and watched the “Dark Star” segment from the Closing of Winterland DVD, and yep, it was an adventurous moment in an evening full of adventure. Clear as a bell, and almost in self-parody, an audience member is captured on the DVD yelling, just before the band starts playing: “DARK STAR!!” Funny. Where the parody of shouted requests usually, these days, takes the form of someone yelling for “Freebird,” my mind always goes straight to “Dark Star!”

Robert Hunter, in his introduction to Box of Rain, discussed writing the lyrics. He had been invited to join the band as their lyricist, after having sent several songs by mail (“Alligator” and “China Cat Sunflower” among them) and journeyed from New Mexico to San Francisco:

The trip took six weeks with a surreal layover in Denver. By the time I hit Nevada I had a dime in my pocket which I put in a slot machine and parlayed into enough to make a phone call and tell the guys I was on my way. I arrived in San Francisco with a case of walking pneumonia and the clothes on my back. The next day I was writing Dark Star, feeling pretty much as the lyric suggests.

Hunter joined the band at a rehearsal in Rio Nido (in Sonoma County), and wrote the initial lyrics to the song while the band was playing. Thus, “Dark Star” is often referred to as the first song he wrote with the band.

Here’s another snippet of an interview with Hunter talking about the origins of the song:

"I was in my cabin. They were rehearsing in the hall, and you could hear from there. I heard the music and just started writing Dark Star lying on my bed. I wrote the first half of it and I went in and handed what I'd written to Jerry. He said, 'Oh, this will fit in just fine,' and he started singing it... [When] I heard the Grateful Dead playing, those were the words it seemed to be saying.... That did it for the time being. Then, a couple of days or weeks later," Garcia said he wanted another verse, so Hunter wrote the next verse sitting in Golden Gate Park.

"I was very impressed with T.S. Eliot around the time I was writing Dark Star," Hunter said, and one line was clearly influenced by a line in 'The Love Song of J Alfred Prufrock' - "Let us go then, you and I, when the evening is spread out against the sky." "Beyond that, that's just my kind of imagery.... I don't have any idea what the 'transitive nightfall of diamonds' means. It sounded good at the time. It brings up something that you can see."

To add just one more little bit to the origin story, Hunter describes elsewhere how he was sitting in Golden Gate Park working on the lyric when someone came by, asking what he was writing. Hunter responded that it was a lyric called “Dark Star,” adding, “This will be important, remember this.”

These blog posts are nothing more than my small attempts to get a conversational ball rolling among the readers—all of you who might stumble over this particular post. “Dark Star” merits an entire book, and in fact, there has been enough ink spilled about the song to put a book together without too much effort.

Musically, the song’s evolution and variations has been meticulously tracked by Dr. Graeme Boone, published in an essay on the development of the improvisational structure in the song between its initial composition and 1972, identifying sequences that appeared and to which were added other sequences over the course of time. An amazing chart elucidates this evolution, with particular sections (each of which is instantly familiar to any Deadhead) identified and labeled. Some say this kind of extreme theoretical analysis applied to a song whose hallmark is improvisation is a contradiction. For me, it’s just another example of someone allowing his enthusiasm to create and expand meaning. Plus, it’s fun! I heard Boone speak in Amherst, Massachusetts, at the “Unbroken Chain” symposium in November 2007, and I still have his handout from the talk, entitled “Dark Star Revisited,” which contains charts of the sequences as well as two mandalas capturing the form of the song. Amazing. 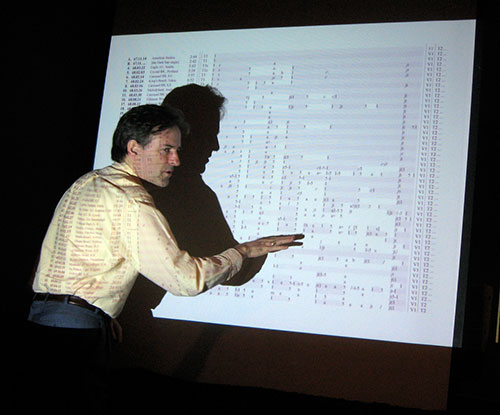 The Dead recorded “Dark Star” as a single during the Anthem of the Sun sessions, and released in April 1968, backed with “Born Cross-Eyed.” The single version, later released on the compilation album What a Long Strange Trip It’s Been, was short, and included the only instance of Hunter’s voice on an official Dead release, reciting a closing “word salad” over Garcia’s banjo as the single winds down.

Along with many other Deadheads, my own first experience of the song was the version on Live/Dead, released in November 1969.

Early live versions of the song, as they worked on the song’s structure and performance, no doubt predate the first recorded live performance, on December 13, 1967 at the Shrine Exhibition Hall in Los Angeles. DeadBase X records 217 performances, with the final one taking place on March 30, 1994, at the Omni in Atlanta. After the 1974 hiatus, performances of “Dark Star” were a rare occurrence. I was fortunate to catch one other performance of the song, at the Greek Theatre in Berkeley, in July 1984, performed as an encore.

And as for the lyrics.

It’s hard for me to separate the words from the voice of Garcia singing them. They are a perfect marriage of that particular voice and words by that particular lyricist. The way the opening word bursts from Garcia, eerie or prophetic, just never fails to get me. And the way he sings (yes, still sings...present tense) the line: “Reason tatters...” captures that shredding of logic for me.

The whole world may be falling apart in some cosmic cataclysm (and given what we know about the universe, this does seem to be the case), but nevertheless, we can go, together, “you and I,” through a nightfall of diamonds. “While we can”—as in, live in the now, seize the day.

The lyric, as with other early Hunter lyrics, clearly marks out the psychedelic territory of the band as a whole, lest there be any doubt whatsoever.

I’ve heard many, many interpretations of the words. I leave that to others, generally. Here’s what Garcia said to Charles Reich in Garcia:

“So I have a long continuum of ‘Dark Stars’ which range in character from each other to real different extremes. ‘Dark Star’ has meant, while I’m playing it, almost as many things as I can sit here and imagine...”

Well said, and thank you, Jerry.

Hey, everybody. I've been working on this mashup for a while and wanted to share. It's the 2.24.74 version of DS with Ginsberg's "Howl." http://www.youtube.com/watch?v=92MimbeMpcg

It's amazing to me that I can't recall how many times I've seen Dark Star - only more than once probably not more than 3. But still, having waited and wished for so long you'd think that would be etched in my memory. But they were all of course wonderful. I think the first Dark Star was the Marsalis show at Nassau. I was at work - I dont even remember if we had tix for the show or even planning to go but that's how it was then after a hundred or so shows. Loved them all and the spontaneity was part of the excitement and fun. Anyway, I was at work listening to a live interview with Garcia on WNEW and he said something like "yeah, we're going to do a little something special tonight" or something to that effect. I immediately thought "Dark Star"! Always wishing and hoping and waiting. Anyway if I wasn't going before I was definitely going then! Wrapped up at work, called the crew, made the rounds and picked everyone up and off we were to Long Island! And of course they played Dark Star and it was a great show! Funny thing is, in hindsight, I think the "something special" that Garcia was alluding to was the fact that Branford Marsalis was playing with them that night and not that they were going to play Dark Star. But it certainly worked out in the end. Miss you Jer...
52 comments
sort by
Recent
Recent Oldest A to Z Z to A
Reset
Items displayed