"We left with our minds sufficiently blown and still peaking..."

We're headed back to that peak with the newly returned tapes from Broome County Veterans Memorial Arena, Binghamton, 11/6/77. The Grateful Dead's last touring show of 1977 finds them going for broke, taking chances on fan favorites like "Jack Straw," "Friend Of The Devil," and "The Music Never Stopped," carving out righteous grooves on a one-of-kind "Scarlet>Fire" and a tremendous "Truckin'." An ultra high energy show, with a first set that rivals the second? Not unheard of, but definitely rare. Hear for yourself...

DAVE'S PICKS VOLUME 25 features liner notes by Rob Bleetstein, photos by Bob Minkin, and original art by our 2018 Dave's Picks Artist-In-Residence Tim McDonagh. As always, it has been mastered to HDCD specs by Jeffrey Norman and it is limited to 18,000 individually numbered copies*.

Thanks for this post space! Great insight to a critical time in Dead history. Grateful as always...

Feel very lucky and blessed to have seen the Boys @ Autzen Stadium 8/22/93 and again in '94. But like spacebro mentioned, the dip from '93 to '94 was tangible. Had the opportunity to see a '95 Portland show, but decided to pass. TBH, i wasn't nearly the rabid fan then i am now. So much amazing music happening in the mid-90's. I was much more into warehouse raves and disco biscuits at the time. Heh.

Jam of the Week -URGENT

If you have not already heard, leave here at once, it's 4/23/77 ROLL AWAY THE DEW! I think it vanishes in a few hours!! FEATURES>JAM OF THE WEEK at least an hour of one of the top ten all time shows

My Dave's Picks vol. 25 has finally arrived here (original order was MIA, thanks to Brazil's awful customs/mail services), and I'm totally amazed with the "Mississippi..." version here! Can someone recommend another version as fantastic as this one, please??

That half-step is possibly the best one. Glad you finally got your DaP25. Hope 26 didn’t go missing.

hi Marcello , here is a few

download series volume 1 - April 30 1977 with a few highlights from previous night, maybe available on itunes ? hopefully you can access these from Brasil. I remember traveling through the nordeste of Brasil and this was one I enjoyed a bunch. Especially Peggy-O" "Looks Like Rain" "Mississippi Half Step Uptown Toodeloo" all 3 in a row. "Brave the Storm to come" Others were "Friend Of The Devil" St. Stephen -> Not Fade Away > Stella Blue > St. Stephen !!!! "I've stayed in every blue-light cheap hotel" ~ One of the best https://en.wikipedia.org/wiki/Grateful_Dead_Download_Series_Volume_1 its a great download. May 1977 has quite a few of the other top tier performances 5.7.77 5.12.77 5.17.77 9.3.77 11.5.77 , all of these dates have been released, the only one that maybe easy to find and purchase is 9.3.77 aka Dicks Picks 15 a couple from other years are 8.5.74 aka Dicks Picks 31 and 7.12.89 RFK Summer 1989 Box set. I was just commenting on Daves Picks 26 page about this one and the Half-Step you mention and then I saw your post. what part of brasil are you at ?

check this one out, i have been the last couple of weeks. its a good one too http://www.dead.net/sites/all/themes/dead2013/jplayer/?url=https://sos2….

BCE got it off of Amazon from recently discovered overstock...

'Cats under the stars' & 'The Wheel' mirror

At first, thanks to all who have been visited my mirrors, mostly XL 'Cats under the stars' mirror listed in cat shop. The mirror is ready for shipping worldwide, you can find it here: https://www.etsy.com/listing/595957100/cats-under-the-stars-mirror-jerr… I'm working currently on another mirror dedicated to Jerry. It's 'The Wheel' mirror, with the lyrics applied on the back side of the mirror. Hasn't been listed yet, but for Jerrys's birthday I listed psychedelic Jerry's hand made as a wall mirror: https://www.etsy.com/listing/632494283/psychedelic-jerry-garcia-hand-de…

Lost in the mail

It was lost in the United States Postal Service system.Much frustration with the delay, now turned to joy. The only date I think I see on the label is in the lower section under the 2nd bar code and above the description, which reads: 01/2018. There is also the 3rd of 4 bar codes on the label in that box.

While it's not surprising that tix to the P&F Headcount Benefit Friday at the Apollo tumbled down several echelons of the firm's socioeconomic caste without claim, I still consider their availability a great fortune. Having never visited, attending any performance at that historically significant venue for the (my) first time would have been cause for a bucketlist deduction, but this was clearly special. Though tired, I returned home to discover that 2018's stellar - and costly - box set run would continue with the wish-list-topping (now that Szell is out) release of BOTT material for Dylan's 14th Bootleg installment. Because the amazon.uk page appears to address a Japanese import edition, I shouldn't imagine that the price quoted for this (purportedly) 6-disc release will be as exorbitant for the conventional Euro & US versions./K https://www.amazon.co.uk/More-Blood-Tracks-Bob-Dylan/dp/B07GVXL5DQ/ref=… 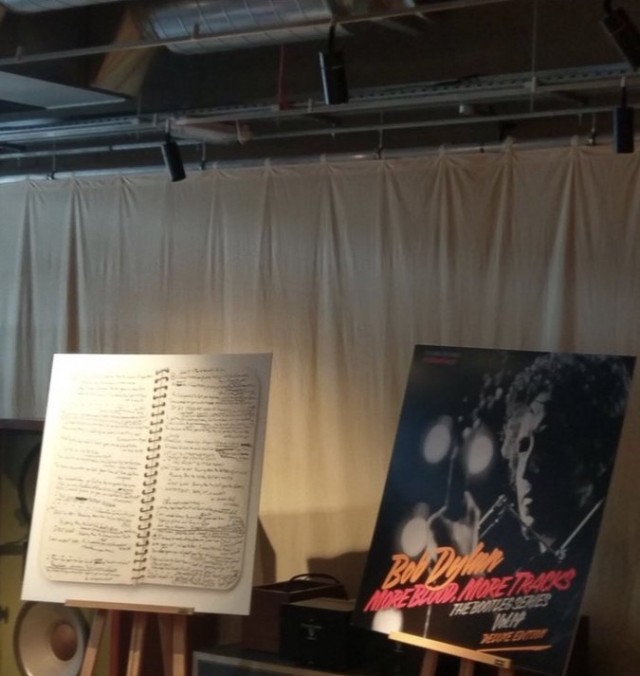 Rather wondering when someone was going to mention it; I thought it was just ephemera that bore some metaphysical correlation to page 5 of the accompanying text.

Technology fosters a certain audiologic pedantry that discounts the practical difficulties of archival transfers. Still, while a bit of the 2-track blues is understandable, Plangent alchemy has affected significant sonic upgrades to existing sources. Portland 74 is a well-known quantity to most, but the Truckin' Jam is a luminescent passage that defies contempt for even acute familiarity. While my favourite GDTRFBs tend to grind like roughly upshifted semi gears in transition from the preceding track, this strong rendition ascends from NFA with deliberate fluidity; also, Keith's bubbly, assertive, sometimes catalystic play makes many first-set standards remarkable. The daughter of the woman who cleans house for me**, age 10, was so entranced by the PNW outer & small wood boxes - suggesting it would make for good jewelry storage - that I gifted it immediately; heck, I was only going to shelve it for the next 50 years (according to actuarial tables), but it's become the center of focus for child - if only for a short bit - who exhibits more enthusiasm than I'll ever muster after unboxing. Still, it's easily the most aesthetically pleasing musical release from top-to-bottom that I've ever seen. Couple disks heading back, but that's been par for the course since the beginning, and I've never had a problem with speedy replacement. **This really isn't saying much in-and-of-itself: in Appalachia, if you've got something then it's implied that you will try to help others, and the most dignified way to do is offering work that you might otherwise undertake yourself. You'd be surprised the difference even a little makes here at altitude. :)

Phish tix in the po'box this p.m.; unlike Lockn where I at least feign roughing it in rolling 4 **** accommodations, I've decided my Outback and bricknmortar lodgings will do just fine on what should be an adventurous run from Hampton to Vegas between 10/19 and Halloween Night in Sin City. I'm only taking one show in Rosemont to facilitate a leisurely slog west, to include a one-night cabin rental in Grand Teton before spending another night in SLC (never visited either!). Near-universal wifi and a mobile workstation have revolutionized my quality of life more than quilted toilet paper, hot water heaters, and Trader Joe's Cookie Butter (though none are indispensable at this point). I've got trail running routes mapped along the way in addition to having identified a couple Y's where I can day pass into lap swimming. Happy.

If anyone is looking for…

If anyone is looking for this or any of this year's Dave's Picks, shoot me a PM. $25 plus shipping. The bonus disk is an additional $25.